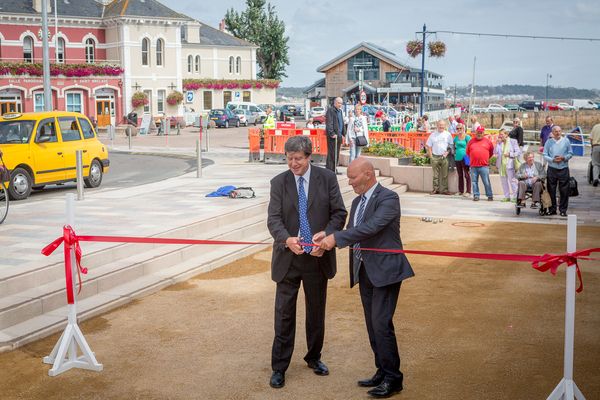 After months of disruption while improvements are being made to the village, States Members will be hoping they've pitched perfect with a new game that they've set up in St Aubin.

Anyone can play pétanque on the new facility at the parish hall end of the Bulwarks, a game which is huge in France and has become increasingly popular in the Island over the last few years.

Connétable of St Brelade Steve Pallett said: “St Aubin is very much a village community and the addition of an area where people can enjoy a leisurely game of boules will add to the village atmosphere.”

The Connétable chairs the St Aubin's Project Board, a community steering group made up of representatives from the business and resident communities, which has been helping with the design of the village improvements that TTS has been carrying out.

A children's play area, new bus shelters, street lighting, new paving and a bigger area of garden have all been created as part of the development.

But the improvements haven’t “bouled over” everyone – it’s been reported some local businesses are planning to withhold their rates contributions because of the losses they say they’ve incurred whilst all the works are being carried out, works that have taken longer than promised.

Now those businesses have to contend with weeks of roadworks making it even harder for people to get to them.

TTS have this week started work on the stretch of road running right through the village. Drivers can expect big tailbacks especially now that the schools have gone back, and there are lane closures and traffic lights in operation on weekdays from 7.30 am until 4.30 pm.

The work is being split into sections - the first is the stretch running from La Haule Slip to the Parish Hall car park, with the next phases running right up to St Brelade's College.

It will stop next Thursday for Battle of Britain day and during the Branchage Festival from 25 to 28 September.

Buses will be running as usual throughout the day, and the road will be fully open at all other times.

Once the resurfacing is finished two more zebra crossings will be created to make it easier for people to cross the road to and from the car park and the parish hall.