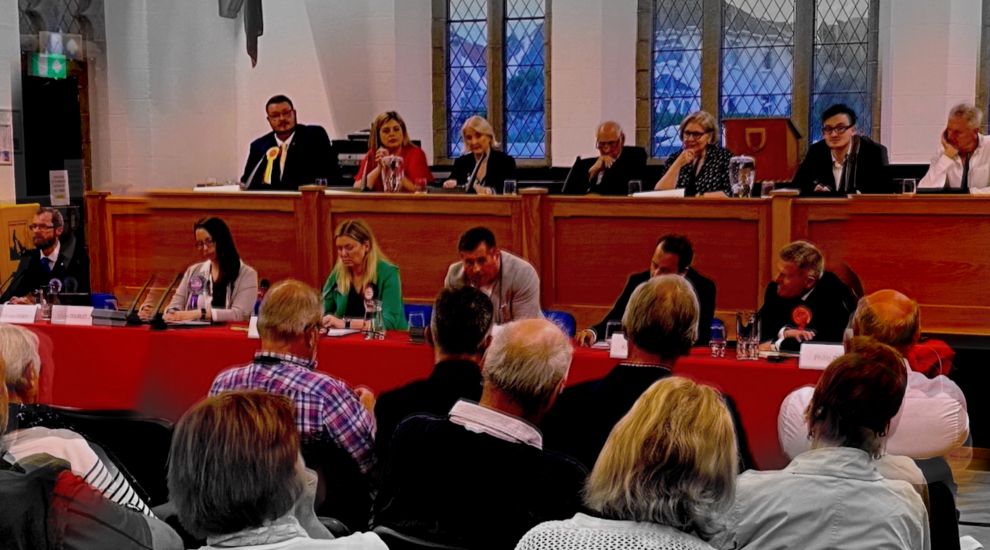 These days there are lots of ways that voters can interact with election candidates. They can watch them on the online hustings events, listen to their radio appearances and maybe even meet them on the street or doorstep.

Changes to this election have seen voting districts redrawn or merged and a new voting system for uncontested seats. It can be a confusing time, but one thing that hasn’t changed are the Parish hustings.

The first of the in-person editions got underway at in a packed St. Saviour’s Parish Hall last night.

The doors opened an hour early, with a live stream set up in the Parish Church across the road should the hall get too crowded. As it was, parishioners, supporters and the curious who couldn’t get a seat were happy to stand at the back.

There was a good mixture of parishioners among some familiar faces from political life in Jersey over the last 20 years. There was even a journalist from the US. 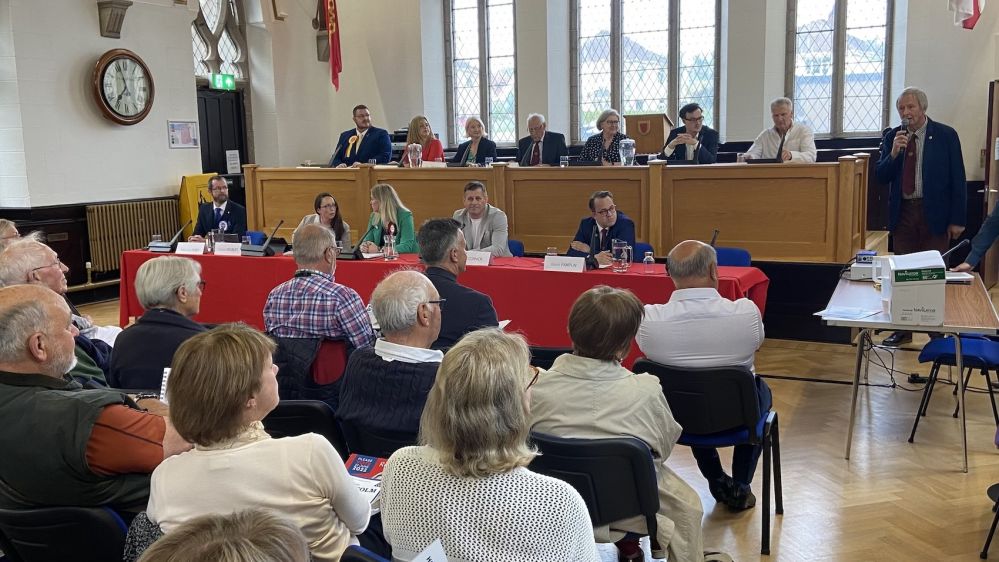 Pictured: There are 12 candidates standing for five seats in St Saviour.

With 12 candidates on the platform, it felt more like a Senatorial Hustings of old. But as the official start time of 19:00 came and went, there was still one seat free.

Candidates aligned to political parties talked about manifesto pledges, others told the audience why they thought party politics was not right for Jersey, and most explained how they’d put the parish first.

Questions could only come from registered parish voters, and that’s when the evening really got going. Advocate Peter Mourant, who was chairing it, would be asking question in batches of three, letting each candidate choose whether to answer all three.

Rob Averty’s question on whether faith in God, specifically the God witnessed to by Jesus Christ, would influence their thinking on issues received a mixture of responses from those with faith and those with none.

The second question asked concerned allegations about States Members, but was disallowed and then another on a similar subject was also not put to the candidates. The ruling was that they were of a personal nature and not general enough for all the candidates to answer.

There was applause from some when a question about the hospital was allowed. 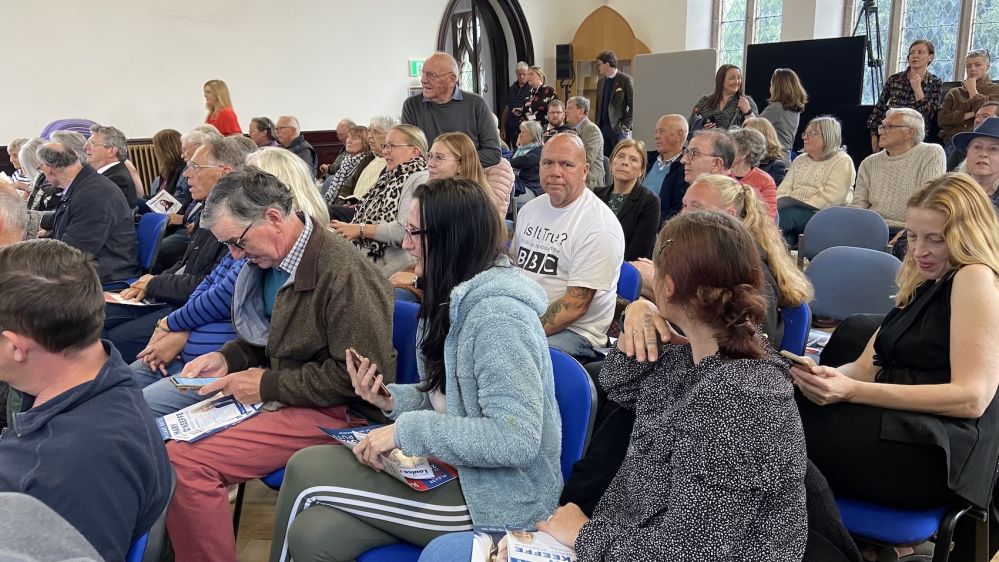 Pictured: There was an impressive turnout from parishioners and supporters, and some familiar faces were among the crowd.

The shouted exchange between members in the audience as the Deputy tried to push his point eventually gave way to question three on improvements to the Five Oaks area. For some of the candidates, it was their first experience of exchanges like those that you won’t get at a virtual hustings or question time event.

The format with each given up to two minutes to answer meant time dragged for some. It was long enough for one of the candidates to get up and casually wander off, disappearing through a door behind the candidates' platform for a few minutes.

Answers included how the Five Oaks Masterplan might help ease congestion and improve safety for children walking or cycling to St. Saviour’s School, what they’d do to tackle the rising cost of living, disbelief at the time taken to approve the hospital site and, in answer to a later question, whether they’d be seeking a role in the new government.

On the final set of three, Advocate Mourant decided to pick them at random. Quick fire answers followed as not all had time to prepare, revealing who reacted well under pressure.

One parishioner, Cheyenne O’Connor, returned to the subject of child protection policy, asking whether the candidates would agree that States Members should have a police DBS check before taking office. 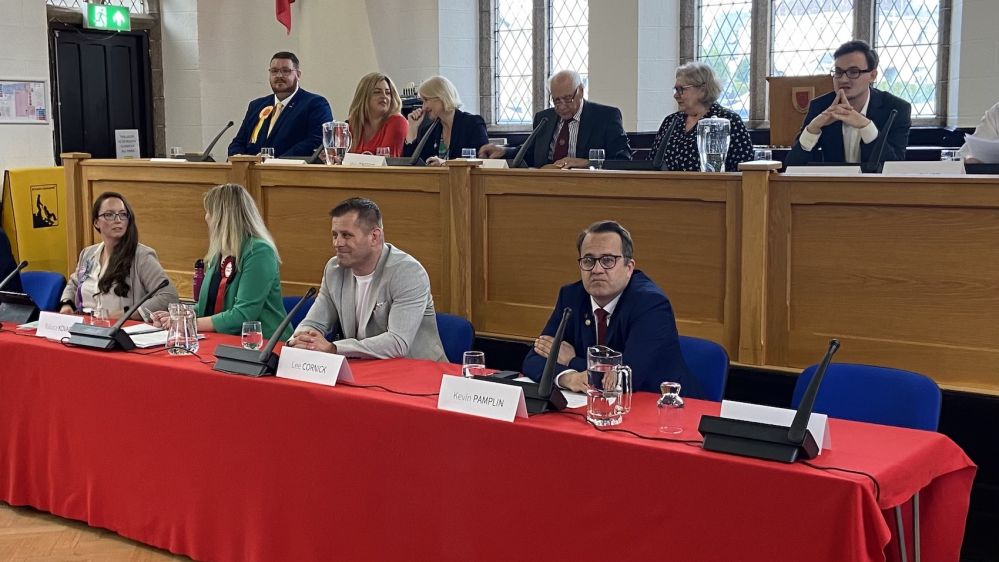 Pictured: There is a mixture of independent candidates and those standing as part of political party within the parish.

As the meeting wound up, the Chair asked them each to give an answer in one to five words to a question from Jean Lelliot, would the candidates support a thorough inspection of the new hospital by the Care Quality Commission?

It was the one thing they nearly all agreed on, and it gave Advocate Mourant the opportunity to quip: “Well, we’ve learned one thing. Jeremy can count to five.”

There are 12 candidates standing for five seats in St Saviour.

Malcolm Ferey is standing as a member of the Jersey Liberal Conservatives, Raluca Kovacs for Reform Jersey, Mary O’Keeffe for Jersey Alliance and Sophie Walton for the Progress Party.

Want to keep up to date with all the latest election news, analysis, gossip and hustings? Sign up for Express's FREE daily news email, featuring a dedicated election section, HERE.

In case you missed it, you can catch up on our guide to all the hustings dates HERE and recent candidate special email HERE.