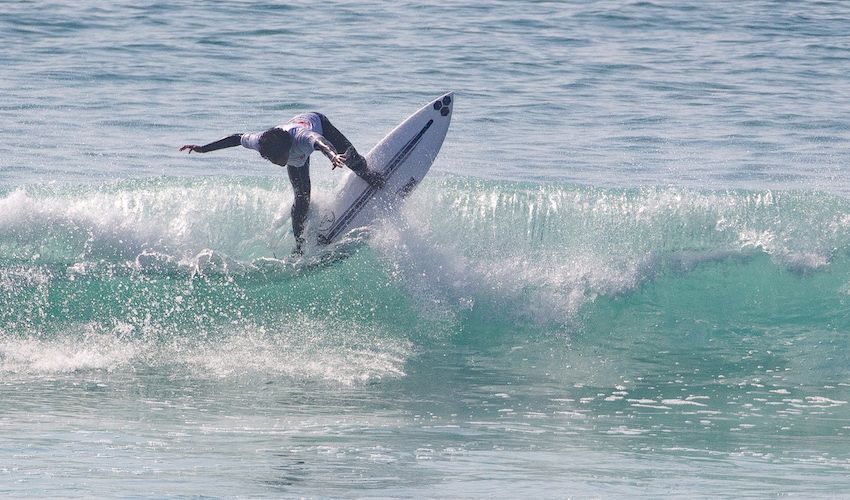 Jersey's young surfers made the most of the fantastic weather and good surf this weekend, stunning onlookers with powerful displays as they competed for a spot in the British Cup next month.

Organised by the Channel Island Surfing Federation, the contest enjoyed good surf of two to three feet. It doubled up as the qualifying event for the British Cup, which will see teams from the Channel Islands, England, Wales and Scotland compete in Jersey waters on 25 and 26 May, as well as the European Championships, which will be held in Portugal in July.

Pictured: Nathan Elms dominated the final and scored the four highest scoring rides of the final.

The Open division was hotly contested from the start of the day with some strong performances in the early rounds from Elms, Josh Evans, Ben Chapman and Charlie Rio. The latter nabbed the highest scoring wave of the day, an 8.67, in his first-round heat.

The final was dominated by Elms who scored the four highest scoring rides of the final, with his top two counting waves scoring a 7.83 and a 7.17.

The battle for second spot was closely fought out between Scott Eastwood and Rio, with Eastwood eventually taking the edge. Despite surfing "excellently" all day, Chapman couldn’t find the waves with better scoring opportunities and finished fourth.

One of the stand-out performances of the day came from Guernsey’s Tom Hook, who won the under-18 and under-14 boys category. The young surfer also came close to winning the under-16s.

With the highest scoring wave of the final, Hook took off near the end of the heat on a great looking wave. However, he threw so much effort into going big on his first manoeuvre that he came unstuck and fell off, leaving the wave to run perfectly along the beach without him.

This opened the door for Owen Graham, who put in a strong surfing performance all day, taking the win.

Pictured: Kitty Brewer won the under-18 girls and came second in the mixed-sex under-18 longboard category.

David Speller also gave a stand-out performance in the bodyboard division. Kitty Brewer won the under-18 girls and finished second in the mixed-sex under-18 longboard category.

Claudia Cosgrove took the under-16 girls title and also came runner up in the under-18s. Amelia Gould - the only girl under 14 years old taking part - was moved up two age divisions to take a slot in the under-18s. The change didn't stop her from winning her semi-final against strong opposition to make the final.

Lead picture: Theo Cabot during the U18 final. (Carol Crowther)

Picnics in the park...with a touch of class