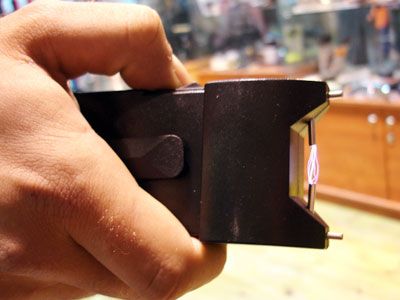 Politicians will be asked to OK the use of Tasers by the police when they meet today.

Home Affairs Minister Ian Le Marquand wants to authorise the use of the weapons – which fire darts connected to a device that delivers a stunning electrical charge - so that senior police would be able to deploy them in the same way that they currently use specialist officers with firearms.

Both he and Police Chief, Mike Bowron, says that they are urgently required, because at the moment police officers are deploying officers armed with guns to incidents that a “less lethal” weapon like Taser could cover instead.  In the report that the Senator is taking to the States today, he wrote that the police are “of the firm opinion that the continued absence of Taser could, one day, lead to an avoidable fatal shooting in Jersey”.

Under the proposals, tasers would only be issued in specific situations to qualified officers, and then only under the authorisation of an officer at the rank of Inspector or above.

The police have been pushing for their introduction for some time. Although Police Chief Mike Bowron would not comment on the proposals until they had been dealt with by politicians, he told a Scrutiny review in 2012 that he felt they would fill a tactical gap in the police’s armoury.

Tasers have been used in the UK for ten years, and are authorised for use in Guernsey.

As part of their case calling for the deployment of Tasers, police recorded a total of 13,333 calls between from January 2011 to November 2011 – they say that in all of those calls, the authority to discharge firearms was granted only ten times. They say that the cost would be around £32,000 to buy ten Tasers, the extra equipment needed to use them, and to pay for training.