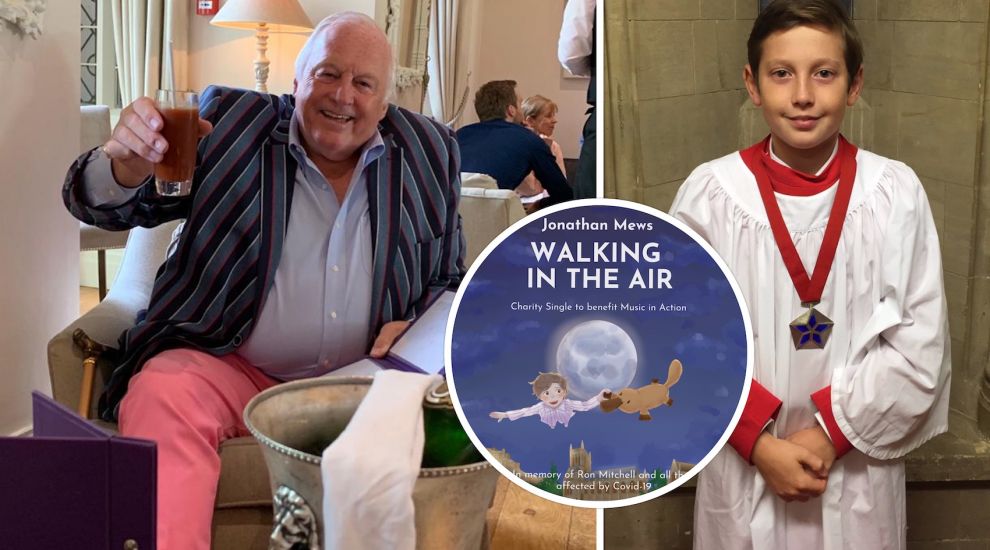 A 13-year-old singer has recorded a Christmas single to help raise funds for the musical charity which first spotted his talent in memory of a family friend who died from covid.

Jonathan Mews has recorded ‘Walking in the Air’ from the Snowman to support Music in Action.

The charity discovered Jonathan’s talent through its youth work.

Then, while he was attending Grouville School, Jonathan was asked to audition by Westminster Abbey following a recommendation from the conductor of the Jersey Chamber Orchestra.

After being offered a place, the young singer decided to make his musical dreams come true and left the island aged only eight to become a scholar at St. John’s College Cambridge.

Pictured: Music in Action hopes to raise £10,000 to fund a series of interactive educational sessions in schools.

After completing five years as a chorister with the prestigious choir, during which time he recorded multiple CDs and toured the world, Jonathan became Deputy Head chorister in his final year.

He is now a music scholar at Oundle School in Northamptonshire.

His latest mini-album, which also features “He Delivered” by Parry, and the uplifting African song ‘Sansa Kroma’ from Zimbe by Alexander L’Estrange, was released in memory of those affected by covid and especially Ron Mitchell who was a family friend.

“Our gorgeous loved beyond words Ronaldo was a larger than life character and he deserves this wonderful public tribute,” Elise Mitchell, his daughter, said.

Proceeds from the sales of the album will go Music in Action, who is aiming to raise £10,000 to fund a series of interactive educational sessions in schools as well as young artists masterclasses and performing platforms.

This will help the charity continue its work throughout the year to help those with little, or no access, to live music and those with limited social interaction, which has been made even more difficult at this time.

“In addition to celebrating the memory of a man who is so missed especially at this time of the year, the single is a testament to the ongoing work that the charity does developing the musical talent of young people on the island,” Dr Toni James, Development Manager for Music in Action said.

Early next year, islanders will be able to see Jonathan perform the classing song in person at the Jersey Chamber Orchestra Concert, which will take place on 29 January 2022 at St. Thomas’s Church.

In a separate musical charity effort over the festive period, 30 artists have banded together under the direction of local music and video organisation, Blood Sweat and Tears, to record a Christmas single in support of Jersey Hospice Care.

‘In the Bleak Midwinter’ was the brain child of Jared Crespel and Gavin McDougall, who enjoyed recording a Christmas song in 2020 so much they decided to do it again to raise money for a charity.

The duo chose a song that was out of royalty terms so that every penny raised from the song would go to Jersey Hospice Care the hospice.

In total, 33 artists have been involved in the process, including three string musicians.

“The artists were a pleasure to work with and very happy to be involved which was brilliant,” Jared and Gavin, who lent their musician skills to the track, said.

“We were able to include a wide variety of artists with individual styles which was great.”