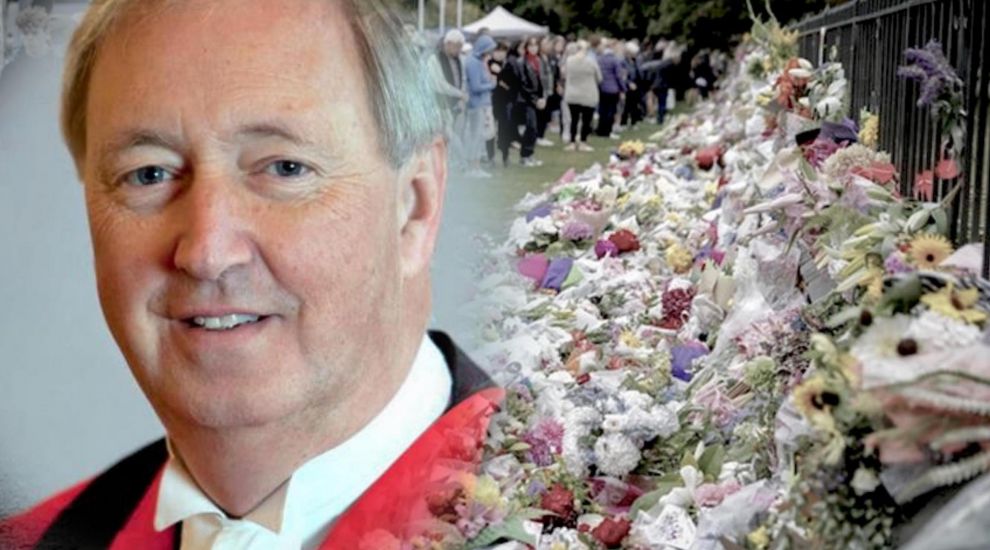 The Bailiff has reminded islanders that "tolerance and respect" for those from all religions and walks of life are the "building blocks" of Jersey's community during a vigil to remember the victims of "a dark day for humanity".

Sir William Bailhache was joined by the leader of Jersey's Muslim community Dr Jamali, as well as the Chief Minister, and the Dean as he led tributes in the Royal Square to those who lost their lives in last week's terror attack on a mosque in Christchurch, New Zealand.

A vigil is being held in Royal Square from 5.15pm this evening, in memory of the victims of the Christchurch mosque attacks. This is an opportunity for our Island community to come together and reflect on this tragic loss. I would like to encourage all who are available to attend pic.twitter.com/ym0rORB1l8

He added that the vigil's purpose was to also allow for grieving.

The Bailiff described the pain for those who have lost a loved one as one that will "run for decades, as many of those killed or injured were young people with their lives ahead of them, lives in many cases either lost or shattered."

TONIGHT: Pleased to have been able to help the putting together of a Vigil today for our friends & neighbours in #Christchurch New Zealand as they come together today so do we here in #JerseyCI Please join us for this respectful ceremony 5pm Royal Square. pic.twitter.com/rId0NtFmJC

Sir William concluded that he hoped "standing side by side with New Zealand" would provide "some comfort" and act as "an expression of our resolve to reaffirm tolerance and respect as the building blocks of our community in Jersey."

A Book of Condolence has this week been made available to sign. It will be sent to the High Commissioner for New Zealand in London at a later date.

Read the Bailiff's full speech below...

Your Excellency, Chief Minister, Mr Dean, Dr Jamali, Reverend Halls of the Methodist Congregation, ladies and gentlemen and especially all from New Zealand.

It is very good to see so many people here tonight for this short ceremony in which we stand side by side with our Commonwealth colleagues in New Zealand who have suffered so much following the terrorist attacks in Christchurch last week. It is a pity we have to be here at all, but the circumstances, good that we are.

I am very grateful to Dr Jamali, the leader of the Muslim community in Jersey, for agreeing to speak to us. He and all the Muslim community are particularly welcome tonight because it is important that you hear from these addresses and see from our attendance that we recognise that an attack on the Muslim community is as evil as an attack on any other community. People do feel strongly about religion and equally strongly, in some cases about the lack of religion; but at the end of the day, any religion or lack of it does not justify killing and injuring the innocent. For what it is worth, I think we all will have to answer to God for what we do or do not do in our lives and I leave it to Him to sort out our religious differences.

If you look at some of the footage covering the attacks in Christchurch, that expression “killing and injuring the innocent” returns to mind time and time again. There is neither rational sense nor purpose in slaughtering innocent people. It leaves everyone confused and shocked. Shortly after the attack, one of the fortunate survivors of it, interviewed in tears asked “why would anyone hurt us like this?”

No one can really answer that question. This was a very dark day for New Zealand and a dark day for humanity.

We are here tonight for two reasons. First of all, as Christians, as Muslims, as Jews, and as people of other or of no faith, we come together as fallible human beings to condemn these shootings. Similar condemnation is being expressed all over the world, and rightly so. It is our combined determination to reject extremism of this kind that reduces the risk of any such thing happening again.
It does not matter whether the perpetrators are Christians or Muslims or Jews or extremists of any other kind. They interfere with the natural order of the world and we condemn them. We need to do this to send that unequivocal message to all. The frequency of the attacks must not inhibit us in this respect – we must not become anaesthetised against them. To emphasise that, in the last 3 months of last year alone, it has been calculated that there was 526 terrorist attacks of one sort or another worldwide.

And, secondly, we are here today to weep. The damage which was done in these Christchurch attacks goes beyond those who were actually killed or injured. Thousands will remember 15th March 2019 as the day they lost their spouse, their partner, their child, their parent, their friend. That pain will run for decades as many of those killed or injured were young people with their lives ahead of them, lives in many cases either lost or shattered.

So standing side by side with New Zealand in this way may be both of some comfort and an expression of our resolve to reaffirm tolerance and respect as the building blocks of our community in Jersey.