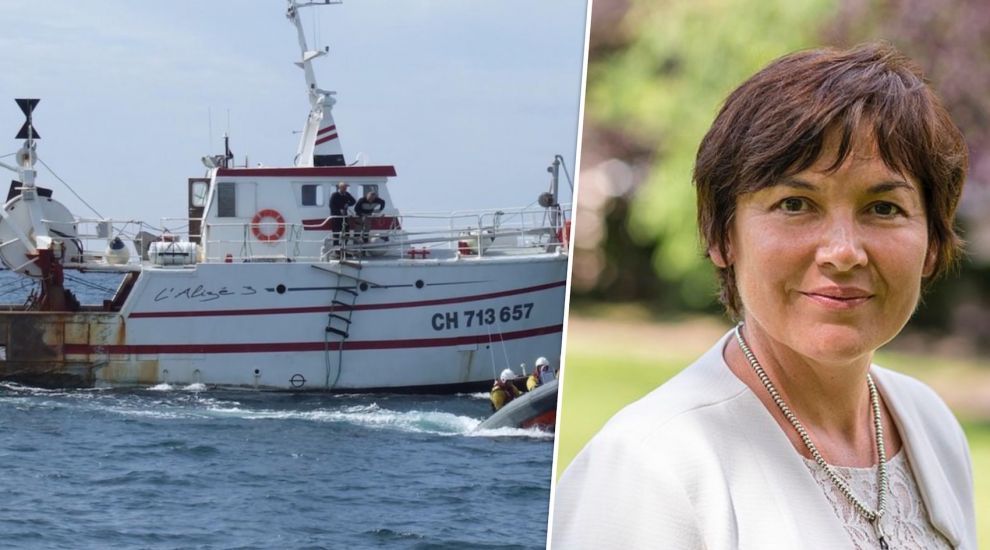 France’s Minister of the Sea has renewed her demand for Jersey to back down in the fishing crisis, while French fishers want to meet President Emmanuel Macron to discuss potential “retaliatory measures."

She also “vigorously” called for “the end of this type of control, even if it’s carried out in a professional way”, according to Ouest-France.

The Alizé 3 was chased away from the north of the island by Jersey’s maritime police vessel, the Norman Le Brocq, on Tuesday morning. 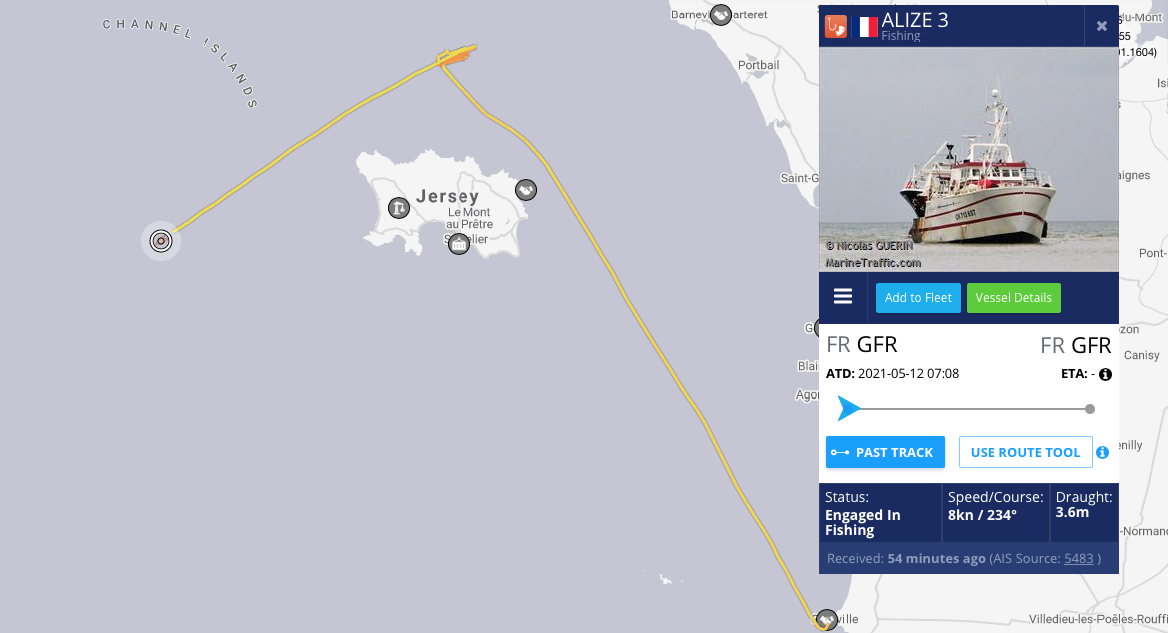 Pictured: The route taken by the Alizé 3. (Marine Traffic)

The 16m x 6m French trawler had been spotted moving up and down for several hours around a zone currently closed off for research into stocks of sea bream.

Ms Girardin wrote that the European Commission had not been given sufficient notice about the intention to close off this zone and demanded that Senator Gorst “transmit all information justifying the establishment of this restricted zone.”

The UK-EU Brexit deal says that fishing restrictions can only be imposed if they are not discriminatory and there is a good scientific reason for them.

Environment Minister Deputy John Young previously said that the bream study followed concerns from local fishermen that stocks of the “very valuable” fish were declining due to overfishing.

“There have been complaints about dredging through those areas that have caused damage and so, a proposal was put to the French, last year I believe, to have those areas closed for a short period to allow their study to take place,” he said. 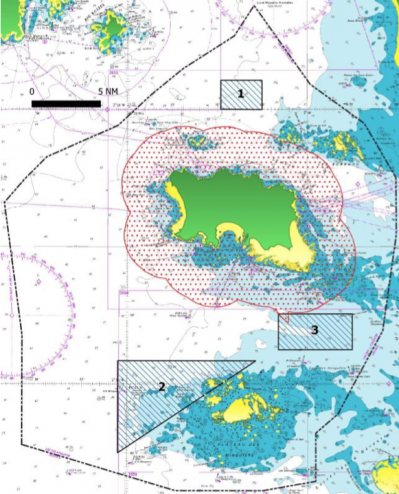 Pictured: Vessels are not allowed to tow or use mobile gear in the three numbered zones due to sea bream research currently underway there.

As a gesture of “good faith”, the island has given Norman and Breton fishers more time to get their paperwork in order to ensure that any issues with their new licences can be resolved. They have until 1 July.

Guernsey, which has not been caught in the diplomatic row, this week announced it would be doing the same.

Jersey had previously blamed the lengthy communications route via Paris, London and Brussels for any issues with the licences issued to French fishers. Following the protest at St. Helier Harbour, it was suggested that a direct line should be set up between Jersey and France. However, this idea was shot down by M. Girardin and the Norman and Breton regional fishing committees. 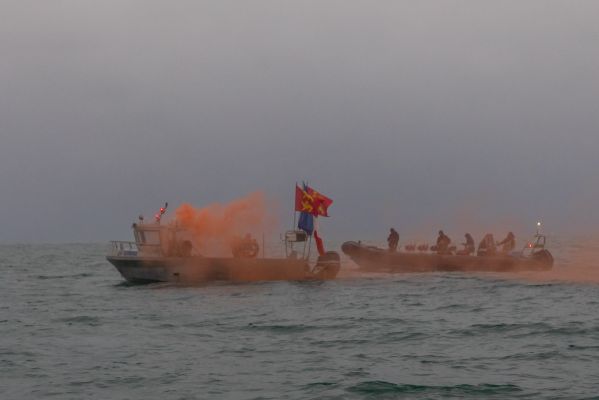 Pictured: A scene from the protest earlier this month.

Increasing upset over Jersey and London’s stance on fishing has seen matters escalated to the National Fishing Committee, which says there is now “climate of total exasperation” along the coast.

On Wednesday, the committee requested a meeting with President Emmanuel Macron “to examine all the levers that are available to us, both on a political level (ongoing negotiations regarding other sectors like energy) and legal one (retaliatory measures”, with an ultimate goal of forcing the “strict” application of the Brexit deal.

Posted by Martin on May 28th, 2021
Annick Girardin IS CERTAINLY France,s Minister of the Sea, which I am sure gives her supreme powers over French waters ---- but NOT JERSEY water,s!

I hope she understands Jersey people are fiercely proud of their waters as are the French of their own - & that we have NOTHING to do with Brexit - so maybe she should look at this problem from the Jersey aspect as we did not introduce the new controls to our waters, nor are we I believe seeking to fish in French waters?

We have not protested in French waters - so it seems to me that all of this was precipitated by anyone but Jersey? I hope this can be settled amicably by sensible discussion?
Posted by Private Individual on May 28th, 2021
I am afraid, that the French have a very short memory when it comes to the help that the British people have given them on more than one occasion over the past 75 years.

They are violating our sovereign waters because they have plundered their fish and shellfish stocks to exhaustion.

They are renowned for illegally fishing in our waters whilst taking undersized lobster and crab, as evidenced over the past 10 years with countless fishing boats being charged with an undersized catch.

They are being extremely unreasonable and antagonistic just to try and push the boundaries to get their own way to take what is rightfully ours.
Posted by Roy Dean on May 28th, 2021
The Jersey and Guernsey EEZ are the responsibility of the Jersey and Guernsey Govts...NOT the EU and French Govts
Obviously...this study re Bream was advised some months and everyone respected this apart from one trawler......
All I hear are threats...threats...threats...threats.......from France....
It's difficult to have a reasonable discussion with a group of people who continue to throw around threats...
Brexit cannot be undone...every UK protected territory whether in the Atlantic or Indian Ocean or Gibraltar is in control of their EEZ....not France or the EU...
Posted by Keith Marsh on May 30th, 2021
It seems to me that Annick Girardin is getting ready for the next French General Election; and will say and threaten anything that might just give her a few more votes.
It is well known that the French have ruined their waters through overfishing and it is noted the number of times French boats have actually been caught illegally fishing in Jersey waters.
It is NOT a snipe against the French fishermen, NOONE is allowed to fish in these restricted waters, until further notice.
It has NOTHING to do with the E.U. or U.K. ~ these are Jersey sovereign waters, the "word" is said. STOP your illegal fishing, get licenced and obey the regulations ~ or there will be no fish left for anyone.
To place a comment please login Login »