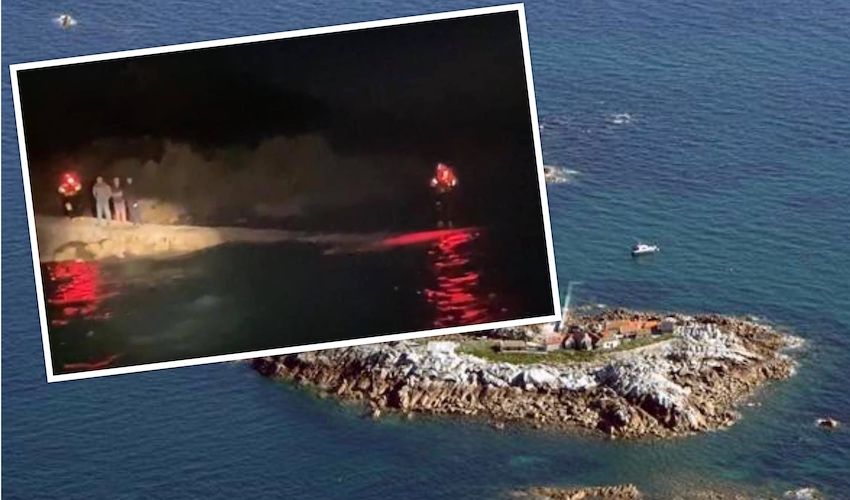 Three people were rescued near les Minquiers last night after their boat hit rocks and sank.

The search and rescue mission was a joint effort between the Jersey Lifeboat Association, the RNLI, Jersey Coastguard and the French Coastguard, who sent in a French Navy helicopter.

The Maritime Operations Centre received a call out at 21:43 after a sailing boat hit rocks in the Minquiers and started sinking.

Video: The Jersey Lifeboat Association, the RNLI, Jersey Coastguard and the French Coastguard all took part in the rescue.

The JLA explained the vessel’s mooring had parted and it had drifted onto the rocks.

Its three occupants called before abandoning the boat and going ashore.

Due to the falling light and low tide and not knowing if the trio had made it safely ashore, both the St Helier Inshore Lifeboat (RNLI) and the Jersey Lifeboat (JLA) were sent to find the crew and salvage the vessel if possible.

A French Navy helicopter was also requested, to help locate the casualties if needed and rescue them safely

The Inshore lifeboat located the trio safe and well on the main island. Due to the sea conditions, they were then transferred to the Jersey Lifeboat and returned safely to St. Helier at midnight.

Meanwhile, the boat was already submerged. A Ports of Jersey marine services vessel will be going back to the Minquiers this morning to inspect the sunken the vessel.  They will then liaise with the vessel’s insurance company to agree on a plan of action.

In a post shared on their Facebook page, Jersey Coastguard thanked the JLA, RNLI and French Coastguard for “their rapid response this evening and carrying out a successful joint mission”.

FOCUS: Is there a boat in the morning?