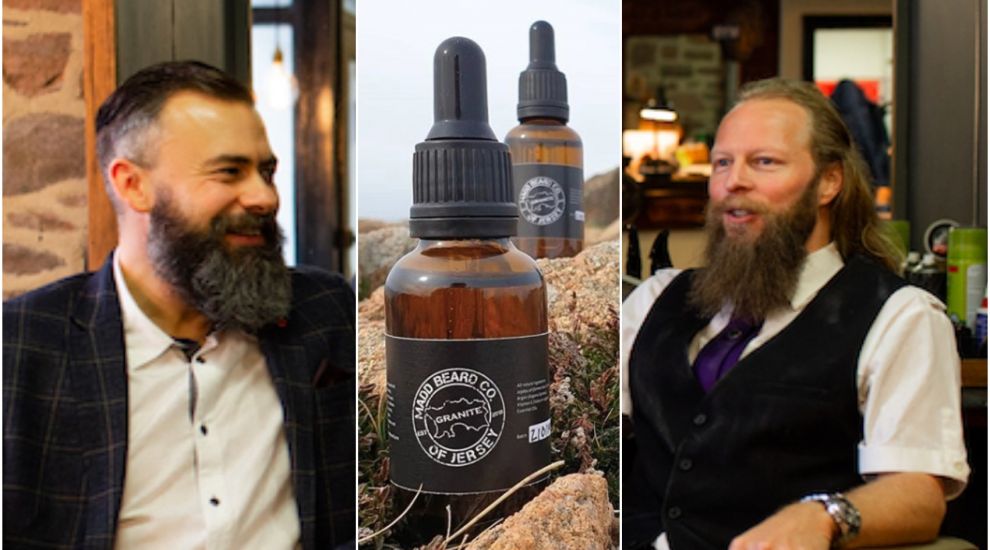 Sometimes the best ideas are right under your nose, or on your chin – and that was the case for two friends of the bearded persuasion who became the first in Jersey to launch their own male grooming company.

Focusing on providing a range of handmade products with local, natural ingredients; it is their hope that their oils, balms and waxes will offer all those with facial hair, premium quality beard care, and a reason to talk more widely and openly about men’s self-care routines.

The brains (and beards) behind MADD Beard Co., Marc Lannoy-Trigg and Add Sheridan, sat down with Express to tell all about the long and short of being in this industry.

Express: What prompted you to launch your own range of beard grooming products?

Marc Lannoy-Trigg: Myself and Add have worked together for some time at Sure, and as colleagues do, we chat in the office and the topic of our beards came up, and what products we used. We both felt there wasn’t a lot of choice on the market for good quality products and I joked that maybe we could do a better job ourselves.

Pictured: Marc Lannoy-Trigg is one of the co-founders of the MADD Beard Company (John Liot).

After an awkward period of silence spent in contemplation, we both agreed that it wasn’t such a bad idea and from there we started to research how it could possibly work. We never imagined it as a business, it was just a hobby for us both at the start and our little personal project.

Add Sheridan: We just wanted to create some superior products for ourselves, but then friends wanted to try them out and really liked then and word started to spread. We quickly realised that there was a demand for what we had produced and so started to take the venture a little more seriously.

Did you employ some expert help to make your products?

AS: No, we just researched a lot, made a plan and did a few testers, but it’s certainly been all us. I think through coincidence more than anything else the very first oil we made was almost perfect, exactly what we wanted. That was how the Driftwood scent materialised and after that everything else came together.

Unfortunately, at that time the base oils that we were using were imported as there was nobody on-island offering anything truly natural, but then we got talking to the guys at Jersey Hemp.  We really wanted to use hemp oil as a base because it's got so many good properties. It's also vegan, which all of our range is, so it was the perfect partnership.

Pictured: Add Sheridan explains how all the products in the MADD Beard range are locally-sourced and vegan (John Liot).

Was there a tipping point when you realised this business had the potential to grow into something big?

AS: We approached Genuine Jersey about joining their community because it is a handmade local product and they were really enthusiastic about it, as there’s nothing else like it on the market in Jersey.

Their support and that of Chris McBurnie, who owns Tibb Street Clothing, and Kyle Gibaut from KSG Barbers, who now stock our products, really helped catapult the range and took it from a hobby to the next level.

We owe a lot to them and Chris remains one of the biggest advocates. I think it was the reception of those around us to the products that told us this business could grow and achieve more than what we had first imagined.

How did you finance the venture?

MLT:  We have put our own money into the business and top it up with a little injection every now and then. Anything we make goes back into the company to pay for raw ingredients, marketing or events.

After only a year we are now self-sufficient as a company, which is pretty amazing. I think like any new business, regardless of scale, you’re always looking from sale to sale, thinking with the next few sales what we can look to achieve next.

Pictured: "After only a year we are now self-sufficient as a company, which is pretty amazing." (John Liot)

AS: We’re not of the mindset where we’re thinking ‘oh we could make a lot of money from this’, we’re just eager to see how it develops.

What has been your perception of people looking to buy local over other alternatives on the market?

MLT: I think it’s had a large part to play in our success, but there is still so much we need to achieve in terms of brand awareness as we aren’t that widely known in Jersey.

I did an event at Holmegrown recently and customers were quite taken aback that there was a company making handcrafted beard and moustache grooming products on the market with locally-sourced ingredients.

In a way this has been a selling point in itself. If I’d not sold any products that day, I would still have seen it as a success as people got to know more about MADD Beard Co. and will go away and tell their friends and family all about us. As it was, we did sell a lot as people really like the scents and texture of what we have created!

AS: We’re excited about being part of the Simply Christmas markets in the Royal Square in December as this will be a great chance to showcase our products and to meet other members of the Genuine Jersey community who are doing great things locally.

How important was it that the products be vegan and environmentally friendly? Are these values close to your hearts or features that you think customers are driven towards now?

AS: A bit of both really. I think that people are becoming more concerned about it and rightly so, but it was also something that certainly draws me towards a brand or a company. Right from the beginning when we were putting down the criteria for our company, we knew these things were important to us, to make sure that we were socially responsible as a company, no matter what size we become.

Pictured: "We knew these things were important to us, to make sure that we were socially responsible as a company, no matter what size we become." (John Liot)

Consequently, all of our packaging is recyclable. I think more companies will be looking to get this right so it’s good we’ve achieved this at the outset. I also know one or two vegan guys with beards and they can't use waxes or balms because the predominant ingredient in that is beeswax. Although it was challenging to come up with an alternative, I’m glad we can cater to these individuals as well.

MLT: A lot of the oils that we were using before, although nothing wrong with them, just had a lot of synthetics rather than natural ingredients and this was something we both wanted to move away from.

What have been your experiences of men starting to care more for their appearances and becoming more metrosexual?

MLT: It's been a breath of fresh air actually! I wouldn't go as far as using makeup products, but it’s nice that men feel comfortable enough to talk about their care routines with other men.

You can meet a stranger and they might comment on your beard, you comment on theirs and before you know it, you're talking about beard care products. Ten years ago, this wouldn't have happened, you'd have got punched! It's nice to see that people are using it as a conversation starter and can be open in this way now.

How has the perception of beards changed over recent years?

AS: The biggest misconception we come across is that it is an easy solution. It actually takes more time than you think to keep a beard. However, it's still better than shaving. I think guys have been taking care of themselves for quite some time now, it just wasn't really spoken about, whereas now it's more acceptable to talk about it.  It’s the same as keeping fit and going to the gym, just another level of taking care of yourself. How you style your beard is a cultural thing and trends move around and evolve. The biggest change is that beards are more commonplace and acceptable now, in a work environment as well as socially.

Pictured: The MADD Beard Co. owners think that it's becoming more acceptable for men to talk about their self-care routine.

MLT: In terms of grooming I don’t think the products have changed too much nor will they in the future regardless of what people do with their beards, but how you use them might.

What are your future ambitions for the company?

MLT: We both agree that we will only do what we do if it continues to be fun, that is our primary goal. We expanded the range pretty quickly from what we initially wanted, so I think now we're going to focus on promoting what we have and possibly introduce a little bit of merchandise. It takes time to build up stock since we still have full time day jobs, so it’s all about fitting in a few hours here and there.

AS: ‘Keep it simple’ was another of our main mottos. We don't do any of this £29.99 rubbish, its rounded numbers all the way. Even our branding is clear and simple just black on brown. We've got some ideas for more scents, but that will come in time. We’ve also done some work in making sure that we get the company ready for when we are ready to expand into different markets such as Europe. I think next year will be a big test now that we’ve getting recognition.

This article first appeared in Connect magazine. Click here to read it in full.