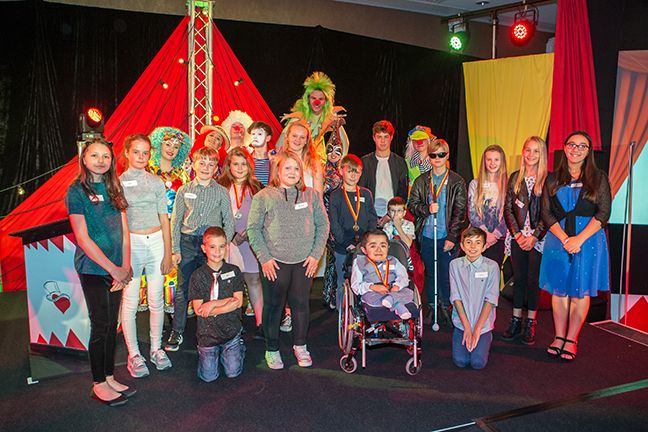 Courage, community, care, achievements and selflessness - these were just some of the virtues exhibited by the young winners at the Variety Young Star of the Year Awards this weekend.

In a circus-themed event featuring local personality Kevin Pamplin as ‘ringmaster’, the audience heard a series of moving and inspirational stories of young bravery and achievement ranging from care work to sporting success.

Overall victor was Kianne Moy (15), who gained the Young Str of the Year 2016 title after having won the Young Star of Courage Award in the older age group (11-16).

Last year, Kianne underwent an operation to remove a rare brain tumour, with a resulting stroke leaving her with severe weakness in her left arm, short-term memory loss and nerve palsy in her right eye. Later, she learned that she had unfortunately developed hydrocephalus - a build up of fluid in her deep brain cavities - and was subsequently fitted with a EVD (external ventricular drain). Severe seizures followed, as well as a diagnosis of diabetes insipidus - an extremely rare form of the condition. Today, Kianne lives with visual impairments, arrested development, and damage to her hypothalamus, which has affected control of her metabolism.

But the determined teenager won’t let this get in her way. The audience heard how Kianne has remained a determined young lady throughout, facing all struggles with a smile and good humour. As a result, she saw her bravery rewarded with a trophy and top prize, £5,000 of travel vouchers from the Cooperative Society Limited.

Sandra Auckland, Chairman of Variety’s Young Star of the Year, described herself as “more and more amazed” every year by Jersey’s young stars.

She commented: “The nominations are always so poignant and inspirational. This year, every finalist has demonstrated strength, hard work and dedication that is well beyond their years. This event is so important, not only to recognise their past achievements, but also to encourage their future aspirations.”

Colin Macleod, CEO of the Channel Islands Cooperative Society, which sponsored the event, said that the organisation was “deeply honoured” to have taken part in the Young Star of the Year Awards.

“[It’s] such a special event that celebrates the courage, creativity, and commitment of the inspirational children and young people in Jersey who have gone that extra mile to make their community, our Island, a better place to in which to live,” he said.

The ceremony - held at the Radisson Blu - was honoured by the attendance of its patrons; His Excellency, General Sir John McColl and Lady McColl, who also acted as judge. Also on the judging panel was BBC Jersey’s Cathy Le Feuvre and Malcolm Lewis, Chairman of Longueville Manor.

Young Star of Courage (11-16)
Winner  Kianne Moy (15)
Kianne also won the overall Young Star of the Year award for maintaining an outgoing and helpful demeanour in spite of her physical and visual impairments resulting from a rare brain tumour and diabetes insipidus.
Finalists Tamzin Bougeard (15) and Olivia Gallichan (11)

Young Star of Community
Winner Juliana de Sousa (11)
Juliana was praised for her support and welcoming attitude towards new students, often offering to translate for those who cannot speak English.
Finalists Sophie Collis (16) and Kai Ballantyne (9)

Young Star as Carer
Winner Briony Holmes (10)
Having moved to three different schools to assist her brother, who has autism and learning difficulties, Briony was recognised for her unwavering support.
Finalists William Moyse (14) and Riley Hansford (8)

Young Star of Sports
Winner Natasha Forrest (15)
Ranked number 30 in the UK and having been the star of the Island Games, reaching the semi-finals at just 14 years old, Natasha won the award for her sporting achievements.
Finalists Kiana-Jade Dupré (13) and Isaac Tarrant (10)

Posted by June OKeeffe on Oct 12th, 2016
puts us all to shame, fantastically done. Remember that you miserable lot out there when you moan for no reason think about these wonderful youngsters xx
To place a comment please login Login »