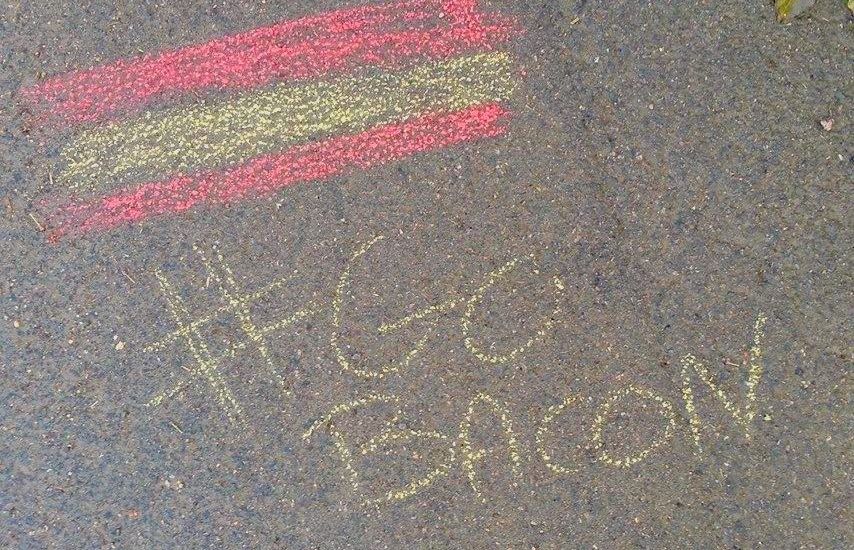 Amid calls from the Minister for Infrastructure for pro-animal chalkings to be given the (pork) chop, ‘anti-vegan’ messages in favour of chicken, cheese and other meats have now emerged across the Island.

Facebook page ‘Not The Jersey Police’ posted a series of photos showing pro-meat messages, as part of the fake ‘#GoBacon’ initiative – “a new movement for underrepresented meat eaters WHO JUST WANT TO BE HEARD!”

Amongst the images - including “I love steak” and, “Cheese tho…[sic]” written on St Lawrence green lanes - was even a special haiku dedicated to bacon. 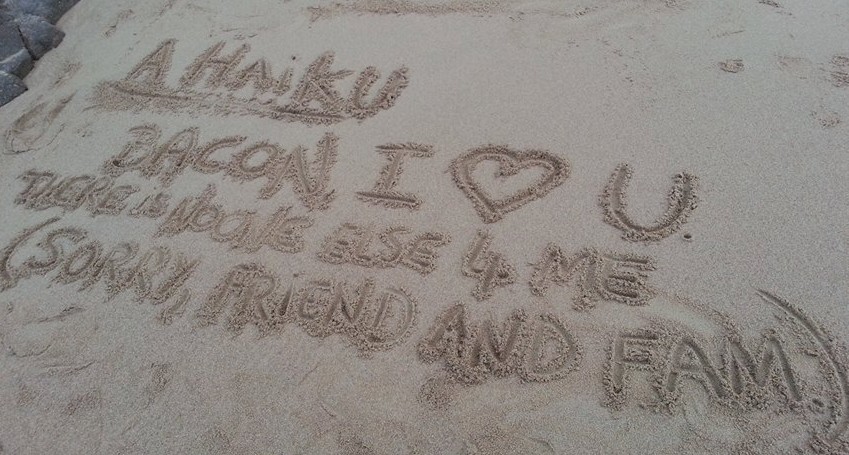 Pictured: A haiku in honour of bacon. (Photo: Ryan Thomas)

Another message included a carnivorous take on a previous chalking from the 'Vegan Chalk Challenge Group'.

They had previously drawn a picture of udders in St Andrew's Park accompanied by the caption, "If you had to suck them, you'd drink almond milk!" In an inscription on the beach, the response read, "I'd suck 'em dry!" 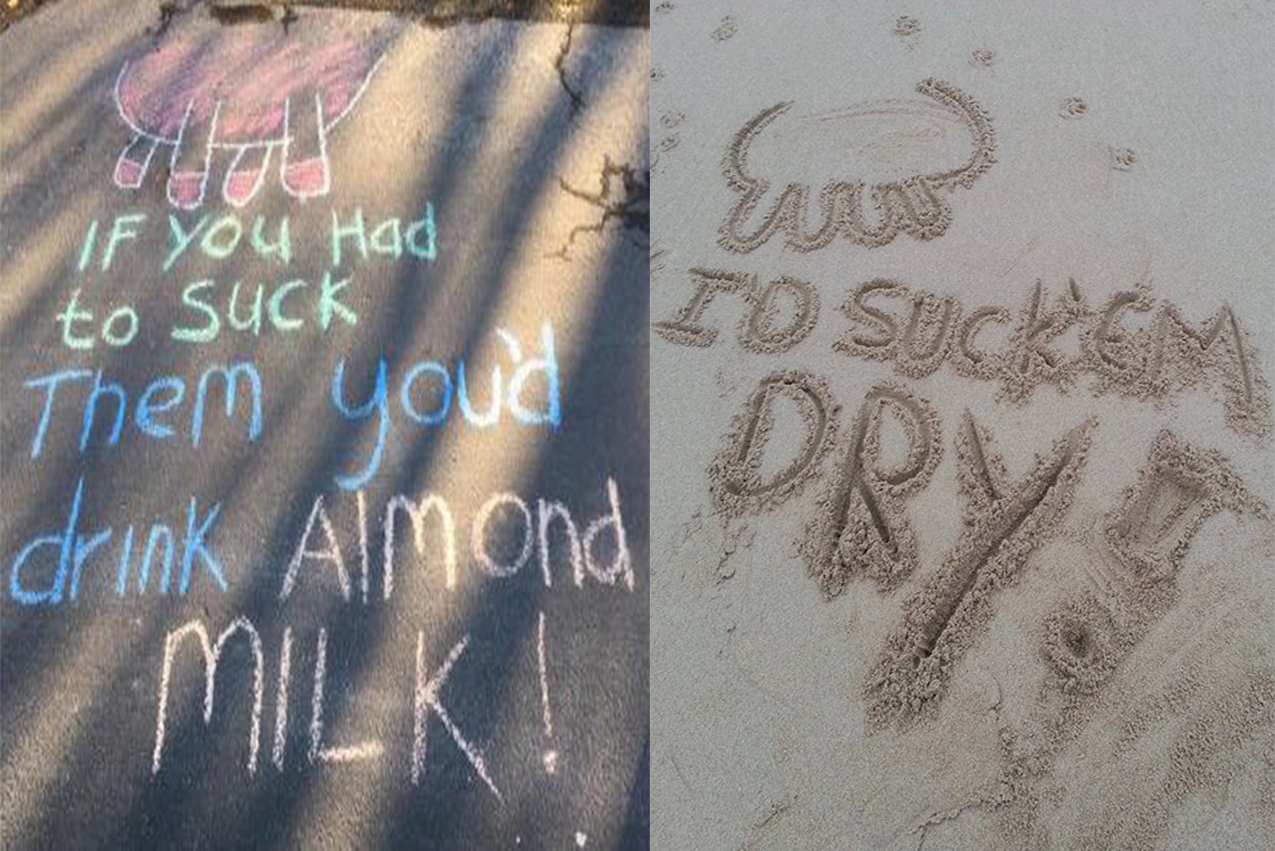 Another of the more shocking posts was a note saying, "sausages" left by a pile of dog excrement.

But some islanders failed to see the funny side, with one claiming that the graffiti-style notes amounted to “bullying.”

One Facebook user commented: “Some people might think it is like a form of bullying what you are doing… I am not saying that any of you are bullies , I am sure your not , but we all have to be respectful of one another , and each other feelings. [sic]” 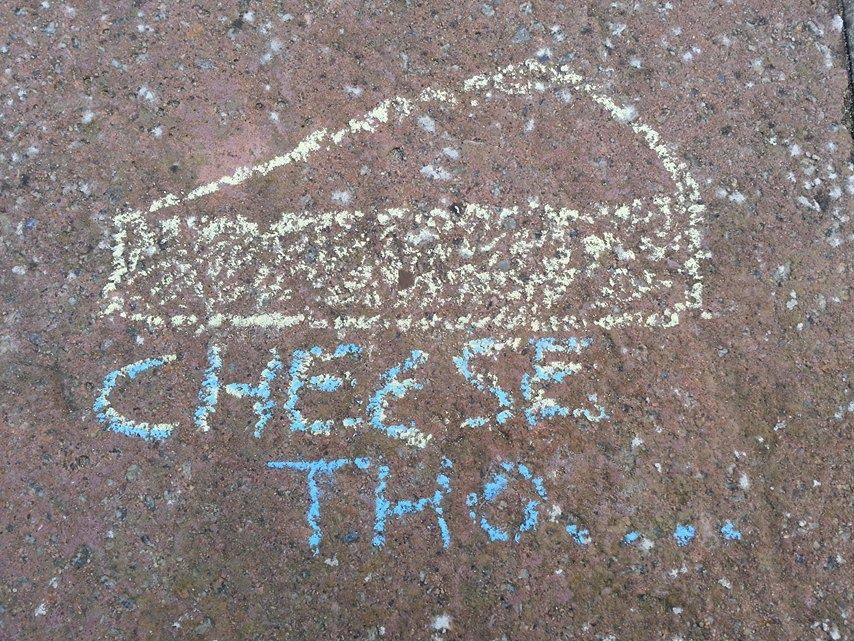 Pictured: The two graffiti-style artists' opinions are like chalk and cheese - quite literally. (Photo: Ryan Thomas)

Ryan Thomas - the man behind the messages - assures locals, however, that his intentions were not the 'wurst', and that his satirical page is all in the name of poking fun at Jersey's idiosyncrasies.

He told Express: "I love living in Jersey and all the uniquely ‘Jersey’ scandals and melodrama that comes with it; from renegade Vegans to unreliable ferries... So when it comes to my #GoBacon road-chalking, I wasn’t out to make some grand anti-vegan statement, nor stop them from chalking it up! Not at all, I love it! After all, if the island wasn’t so wonderfully weird I’d quickly run out of ammunition. I’m just trying to crack the next joke, and hopefully, make a few people smile." 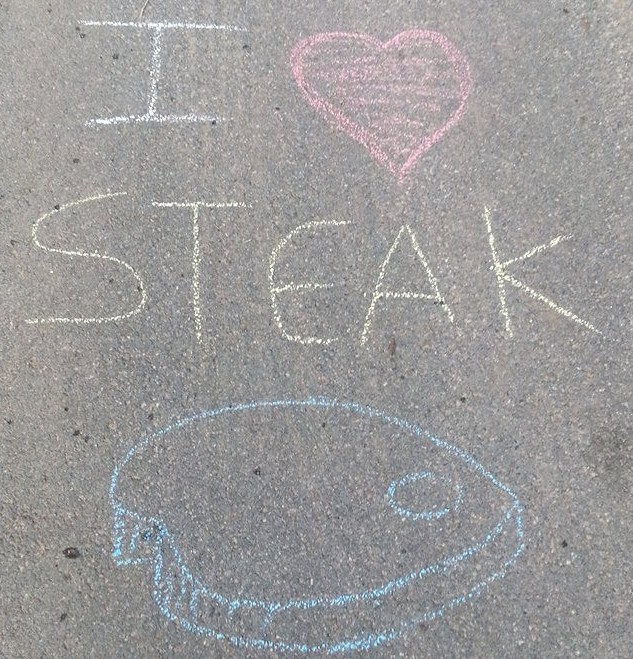 Pictured: "I did it blue to accurately represent my choice in steak," the 'Not The Jersey Police' page joked in a Facebook comment. (Photo: Ryan Thomas)

"‘I love steak’ isn’t really a message I want to be caught scribbling on a road – with chalk – like a madman. So when a dog walker strolled by I was quick to hide the incriminating chalk in my pockets, give my own handy-work a look of utter disdain and mutter something-or-other about "kids these days"," he added.

"It’s never my intention to cause offence, but you can’t bake a cake without breaking a few eggs… (Unless it’s one of those gross vegan cakes!)"

Posted by MarkSleep56 on Feb 8th, 2017
Glad someone is fighting back.
To place a comment please login Login »