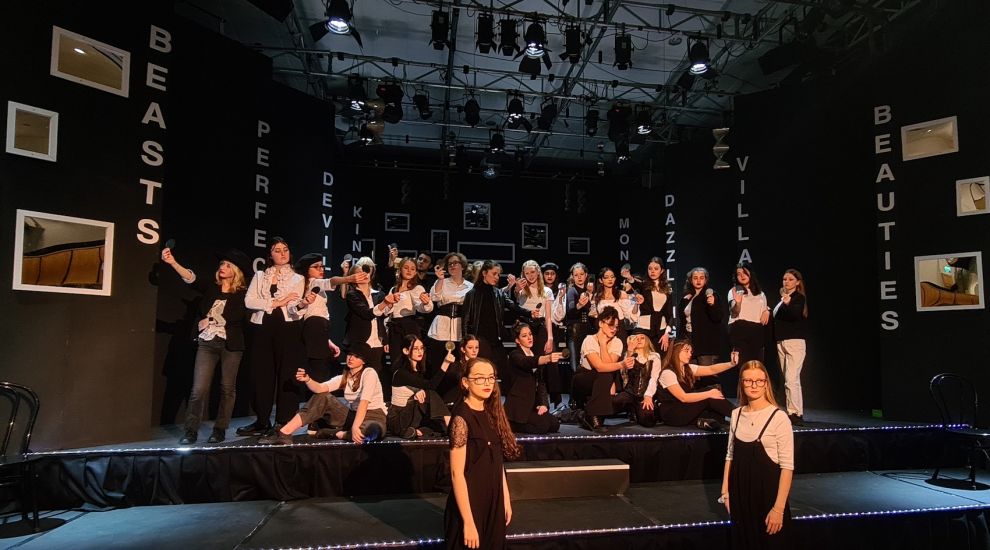 After two years without a show, a ‘ban’ on musicals, several cases of covid and a mask requirement, 32 students from JCG are finally getting back on stage tonight with well-known tales such as Beauty and the Beast and the Emperor's New Clothes, as well as more unusual ones.

JCG Youth Theatre will be performing ‘Beasts and Beauties’ every night at 19:30 from tonight (7 December) until Friday 10 December.

This is the first public performance in two years for the group after their plan for a play last year was cancelled.

Their last performance goes back to December 2019 with the musical Calamity Jane and while the budding performers hoped to perform another musical this winter, The Addams Family, covid restrictions meant it had to be postponed until December 2022 in favour of a play.

As Director Caroline Stone explained, the group chose ‘Beasts and Beauties’ because they were drawn to it by the quality of its writing.

“Carol-Ann Duffy is the most amazing poet and we had already tackled her version of Grimm Tales, co-written with Tim Supple who again helped to dramatise the Beasts and Beauties stories,” she explained.

“We knew of Melly Still, the other author, because she is a wonderful contemporary writer and director. In fact, she directed the very first production of this play at the Bristol Old Vic and it received rave reviews. Having ordered the play and read the dramatisations we thought, this is the one for us.”

The show includes six out of the eight stories from the collection, from well-known tales such as ‘Beauty and the Beast’ and ‘The Emperor's New Clothes’, to the more unusual stories of ‘The Juniper Tree’ and The Three Wishes’. 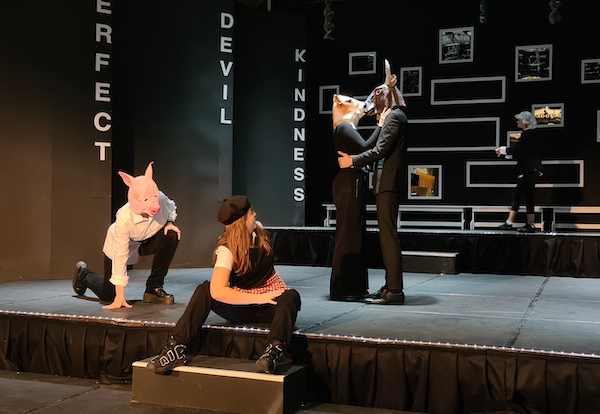 Pictured: There are 32 students involved in the play.

Putting on the play was a challenge for the cast of 32 students ranging from Year 8 to Year 13, the Directors, Ms Stone and Katie Stirk, and the 20 students from the JCG Tech Club who have taken responsibility for set design, the making of props and some other artistic elements such as masks and puppets.

Due to the pandemic, they were only able to rehearse all together just seven days before the opening night. As Ms Stone said, the group is hoping everyone will be fit and healthy when the curtain rises tonight.

“It must be said that they have been incredibly resilient, facing numerous obstacles with cast changes etc.,” Ms Stone said. “We are very proud of them.

“We had to come up with alternative plans for the show in September and so auditions were held later than normal. This has meant we have had to work fast and with real focus. 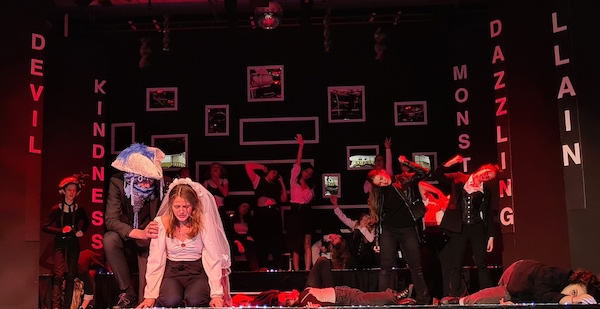 Pictured: The show features the story of 'Blue Beard'.

“In the last few weeks, with rising case numbers in Jersey, we have had to take particular care to ensure students and staff are safe and we have also met to discuss our policy in terms of audience, so that everyone in the auditorium feels comfortable on the night.

“The students have been part of the cast bubble and the crew bubble. We have kept these bubbles separate up to now. However, for the performance itself, these bubbles will need to merge but we are ensuring safety by making all crew members wear masks when in the building.

“It is a little bit different to normal but, in creative terms, it is business as usual I am pleased to say!”

Luckily, Ms Stone said the group was able to count on the support of Principal Carl Howarth.

“We’ve found ourselves in a great situation here at JCG because our Headmaster is a Drama teacher really, that’s what he did before he became a Headmaster,” Ms Stone said. “He has understood that we needed more time, so he has allowed us a little bit more time off timetable to polish the pieces.” 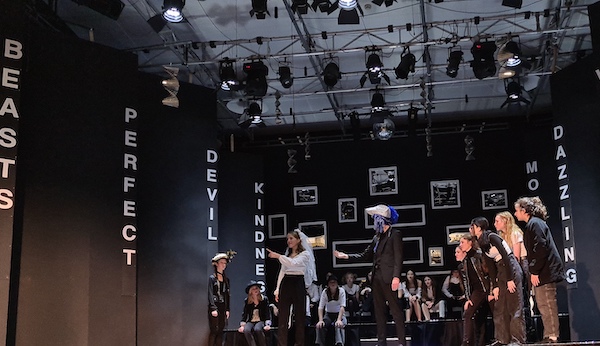 Pictured: The students are “nervous but excited to perform again”, according to Director Caroline Stone.

With just a few hours to go before the first show, Ms Stone said the students are “nervous but excited to perform again” whilst the crew are looking forward to running the show as a backstage team.

“Creating a school play is a really overwhelming task for teachers and this one has been made more complex by the various restrictions that are in place,” she said. “We have tried very hard though and are all anticipating a super performance week. We are also looking forward to a well-earned rest over Christmas.”

She added: “If we can do it, it will be one heck of a challenge in a year where the whole island has been blighted by a pandemic!”

Pictured top: The cast of 'Beasts and Beauties' with narrators Hannah Bird and Eleanor Bayford at the front. 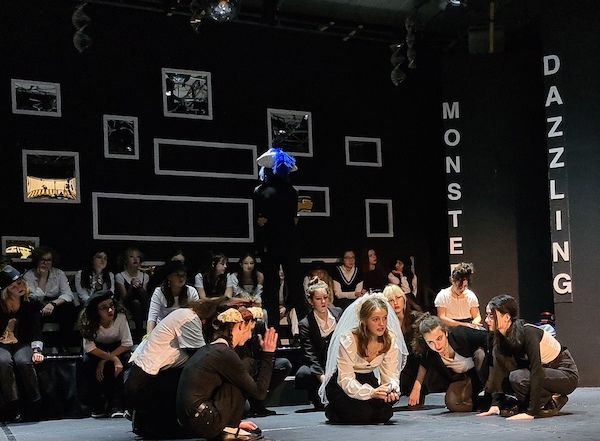 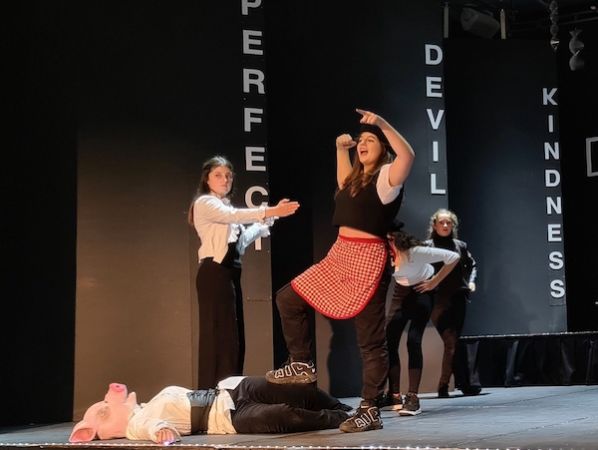 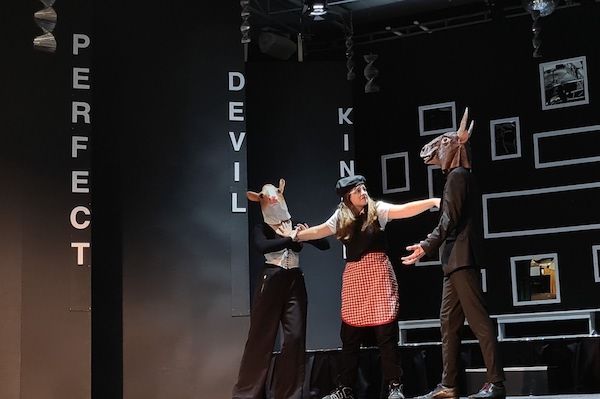