VIDEO: Off with their tree! 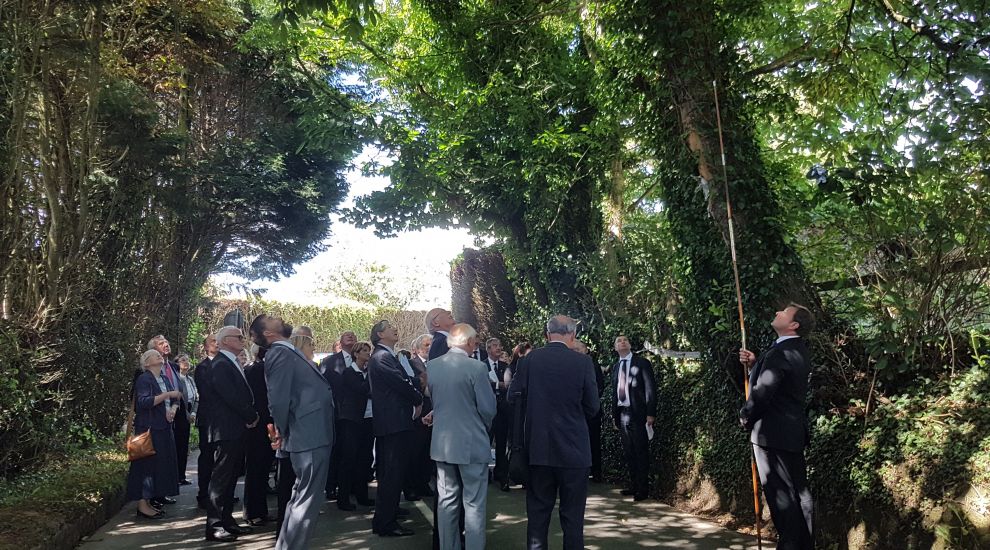 VIDEO: Off with their tree!

Jersey has many traditions that make it unique. But, one of the quirkiest has to be the Visite Royale, when the court leaves its usual premises to pay an official visit to a parish, to check the books and resolve issues such as trees encroaching on the roads.

One beechwood tree fell victim to the tradition during the latest visit in St Mary when the court ruled that it was a potential hazard to road users and ordered it brought down.

The Visite Royale is part of the Branchage and takes place every year. Two parishes are visited every year on a rotating basis, meaning that a visit will happen every six years in the same parish. This year, Trinity was the first to receive a visit from the court early in August, followed by St Mary.

The Deputy Bailiff Tim Le Cocq visited St Mary accompanied by 10 jurats, the Attorney General Robert McRae QC and the Deputy Viscount Advocate Mark Harris. While they once travelled to the parishes on horseback, the court now uses limousines. However, they still wear their official robes, as well as their toques - or ceremonial hats, for the occasion. 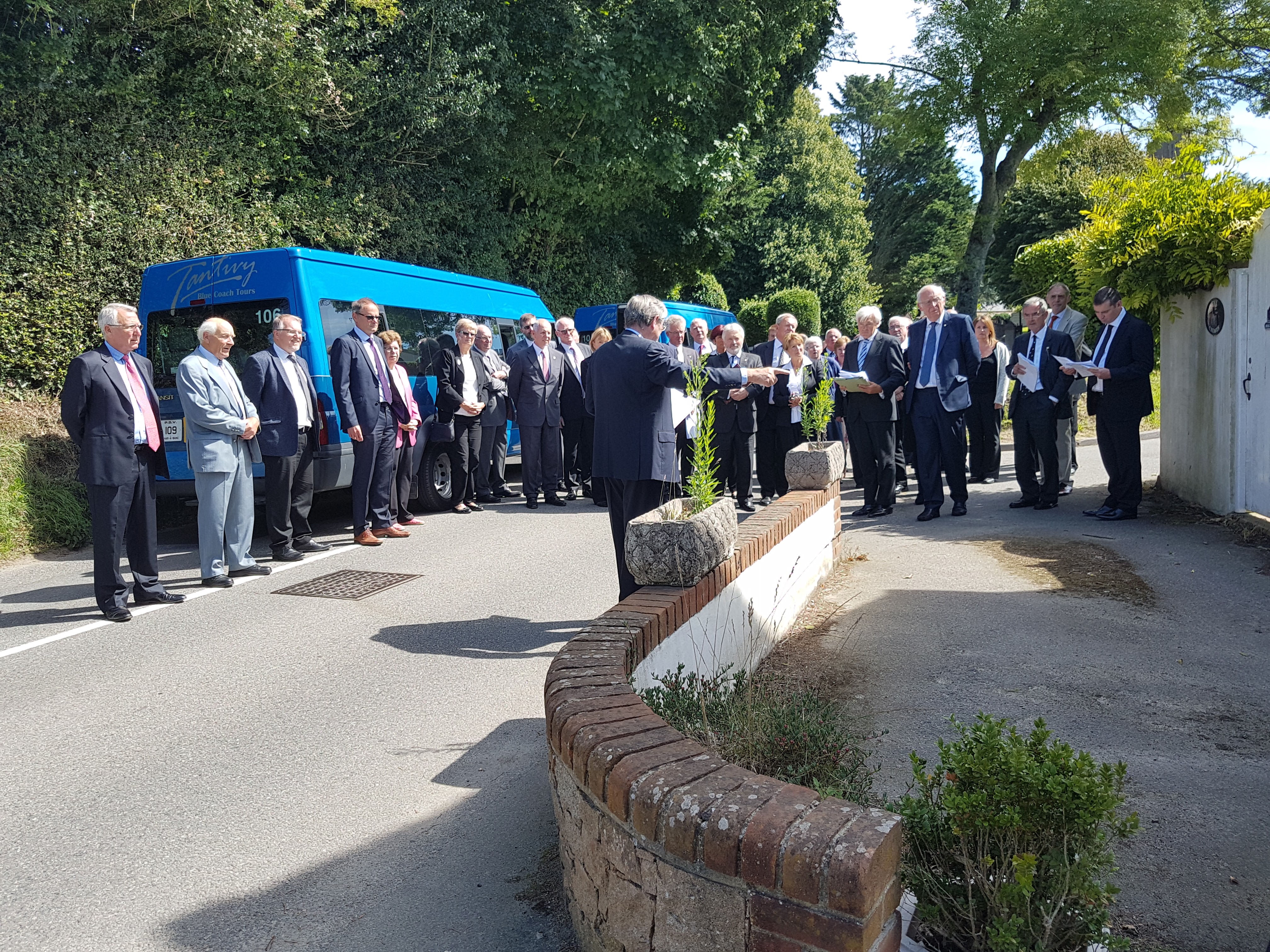 Pictured: The court discusses the issue of a private wall on la Route de Ste Marie.

The first part of the visit took place in the Parish Hall. After opening the séance, the Deputy Bailiff thanked Constable Juliette Gallichan for hosting the visit, adding the court was particularly pleased she had managed to arrange the weather in the way that she had. He then asked her a series of questions about the parish books before  concluding that the court was happy with them. The court then heard from the Road Inspectors and the Chef de Police.

A jury of twelve parishioners was then constituted and sworn in by the Greffier in French. The jury are called voyeurs and swear to show the court the way around the parish roads. All first proceeded to la Route de Ste Marie to consider the first issue of the day. The parish presented the case of a wall located on the side of the road in front of a private property which they want removed. The Attorney General however advised the court not to make any order and encouraged the parish to contact the owner of the land to reach an agreement. The court retired briefly before returning their verdict which followed Robert McRae's advice. 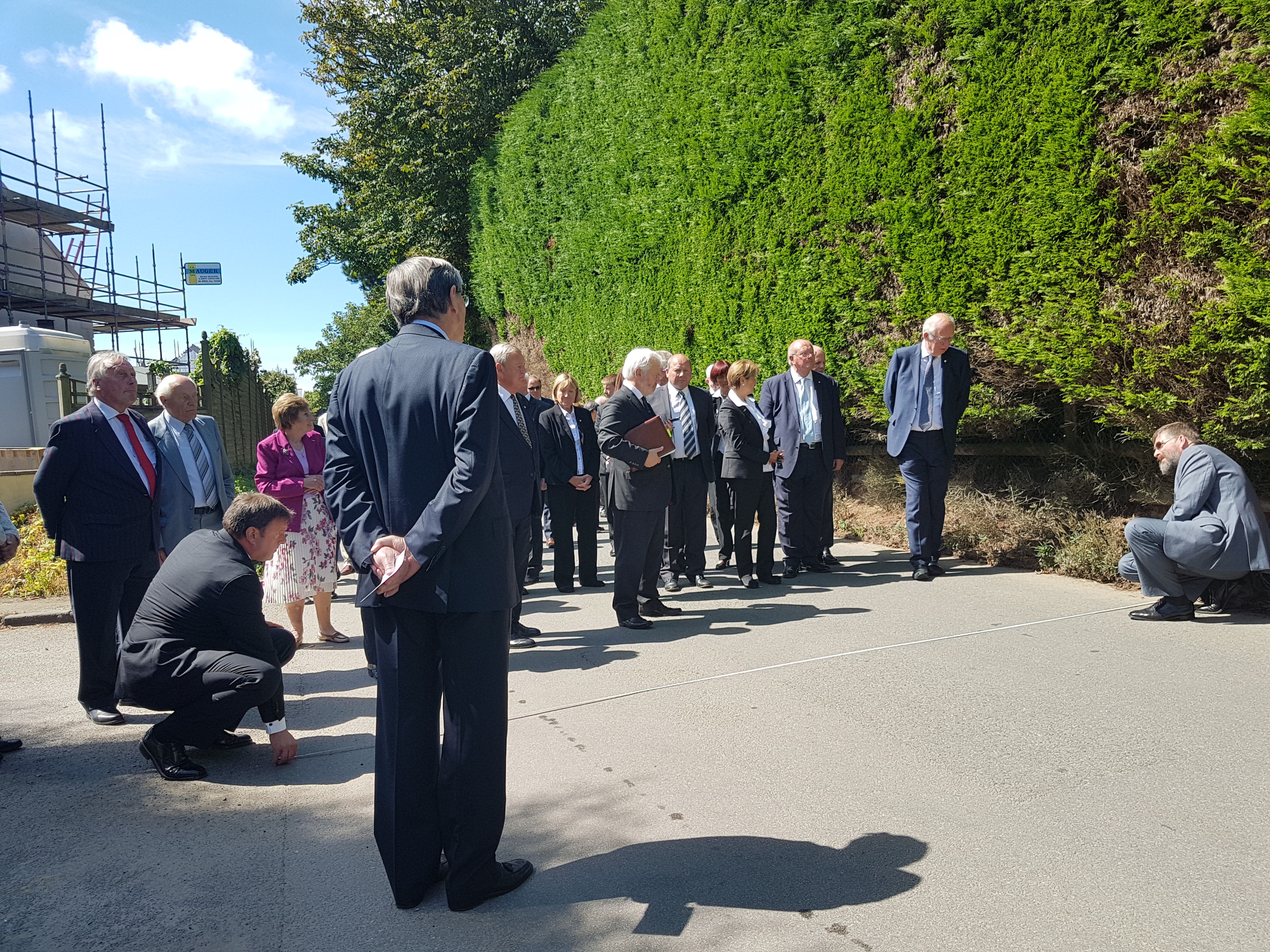 Pictured: The court assesses the encroachment of a hedge on la Grande Rue.

The court also declined to make any ruling regarding a hedge on la Grande Rue. Although the Deputy Bailiff said it was technically an encroachment, he concluded that, given the nature of a road, which is a main route and not a parish lane, the issue should be assessed by the highway authority, namely the Department for Infrastructure.

Both the hedge and the wall got a small reprieve and avoided the axe, but a beechwood tree located on la Rue la Frontière wasn't as lucky. After the tree and the width of the road were measured by the Deputy Viscount, the Attorney General suggested the tree be brought down. Despite the address of junior advocate John McCormick, who was tasked with the defence of the tree, the court ruled it must be removed. Tim Le Cocq said: "This is clearly an encroachment on a public road which poses a safety risk."

He then ordered the tree be brought down within three months, allowing the owner of the land to apply for more time should he need it. St Mary's vingtenier, Simon Jegou, then "axed" the unfortunate beechwood tree with a small axe, sealing its fate.

At the end of the Visite, Constable Gallichan thanked the court for visiting her parish. She concluded: "I am grateful that the tradition continues and that we can benefit from the wisdom of so many learned people to help us with some of the issues we sometimes encounter."

Cyclist injured in collision with car