WATCH: "A vocation under constant siege” 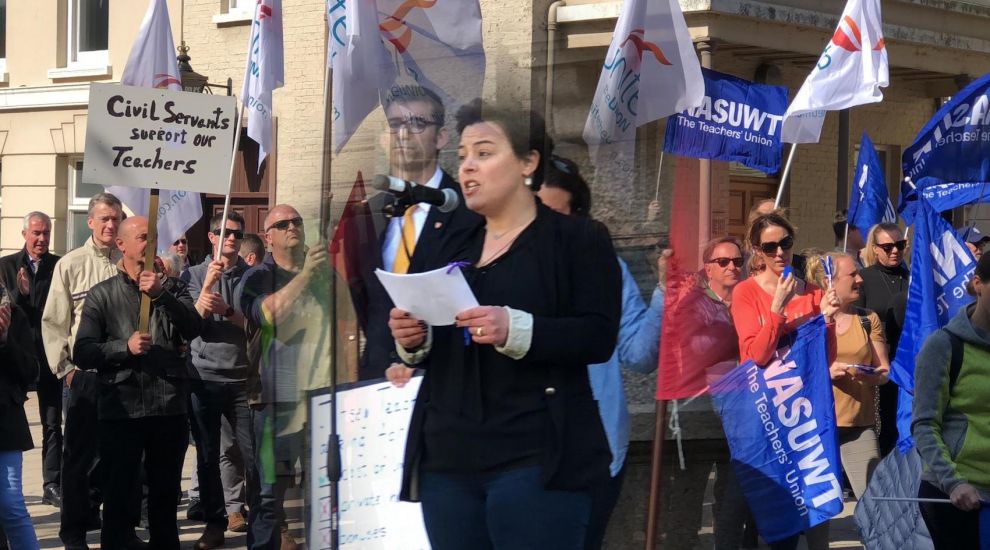 WATCH: "A vocation under constant siege”

A striking teacher has accused the government for fuelling the education staff recruitment crisis through creating a “perception of a vocation under constant siege” by heaping on extra work and scrutiny, while pay stagnates.

Addressing hundreds of teachers and supporters at a rally in the Royal Square during a full-day teacher strike that closed nearly all the island’s States schools yesterday, teacher Emma O’Prey spoke of a “worrying” decline in teacher training applications.

She added that even those that did undergo training weren't guaranteed to stay, with 55% of newly-qualified teachers (NQTs) leaving the profession within the first three years.

"Why don't people want to be teachers anymore? They do, they really do. The perception is of a vocation under constant siege.

"You train for years - the learning and the scrutiny never stops. We are rarely thanked or congratulated, and if we dare to ask for parity, we are ridiculed, called lazy and greedy by armchair warriors on social media," Mrs O'Prey explained.

This, she said, was evidence of an increasingly burdensome profession that deserved to be fairly recompensed by the government, which has so far held firm against calls for a wage rise in line with increases in the cost of living, stating that "there is no more money".

Pictured: Emma O'Prey addressed the crowd of striking teachers and other public sector workers rallying in support of their colleagues.

Government officials have also protested that funding inflation-level wage rises across the public sector would cost millions - and potentially lead to tax increases.

Addressing the argument, Mrs O'Prey retorted: "43 million pounds spent on head-scratching over a new hospital site and, to really stick the boot in, the suggestion that we'd be to blame for any hikes in GST. How convenient."

She added that the real-terms wage cuts teachers were undergoing meant that many were also working second jobs, finding it difficult to make ends meet as prices continue to rise in Jersey.

"The smile on the face of a child that has just solved his first quadratic equation is a reward, but we can't pay our rents, our grocery shopping, our mortgage repayments, our utility bills, our doctors' fees, our insurances, or even, ironically, our dental hygienists in smiles."

"We cannot accept that following your vocation in means that you cannot expect a fair wage," she added, drawing comparison with nurses, firefighters and the Police, who she said similarly "cannot do this just for the pure love of it".

Pictured: Striking teachers brandished strongly worded placards to show their strength of feeling about a pay deal they say is not in line with the cost of living.

NASUWT member Pip Hobson echoed this message in a speech, telling listeners: "The job is getting harder and harder and the thanks is getting smaller and smaller. This is a wake-up call to the politicians. They need to invest in education, and education is teachers."

"We are being told in the media regularly by the employer, we are not worth what we are being paid, we are overpaid, but they never provide evidence to this. We are told there is no more money available. We know there is money put aside in the Medium Term Financial Plan. How do we know? It's people that we represent that put that plan together."

The series of speeches came in the hour before teachers descended on the States Chamber to watch politicians debate proposals by Deputy Geoff Southern to free up money locked away under the government's spending plan for pay rises for public sector workers.

Pictured: Some teachers took their strike into the States Chamber to hear the ongoing debate on Deputy Southern's second bid to raid government coffers to provide a better pay deal.

The proposals will continue to be debated today, with a vote expected this afternoon.

If they do not pass, education unions have warned that yesterday's full-day teacher strike may not be the last.

The strike in pictures... 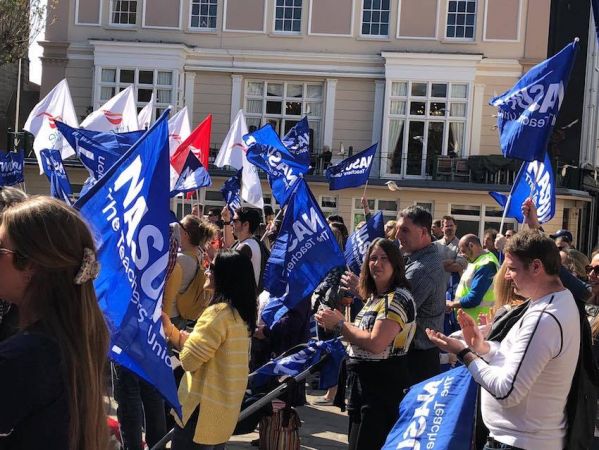 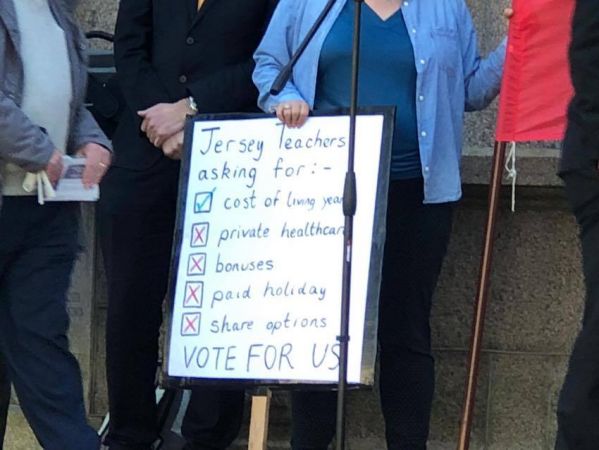 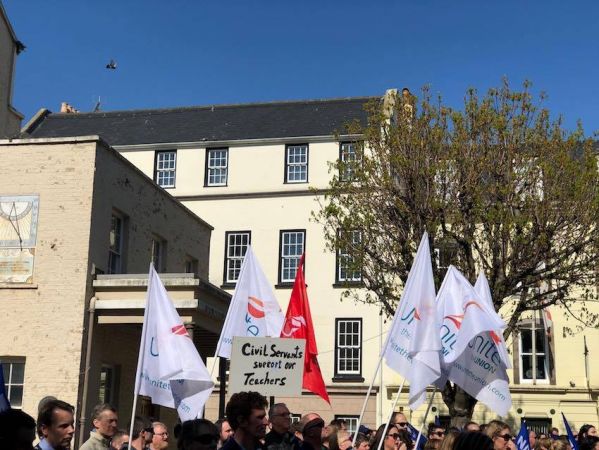 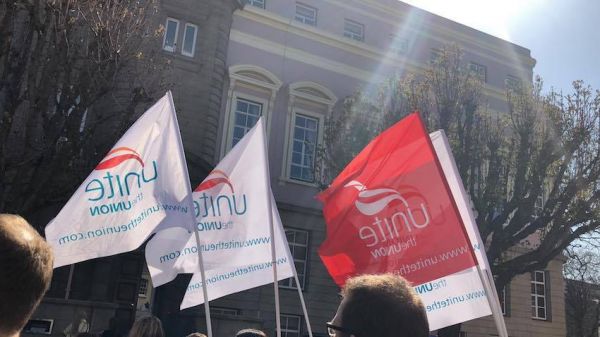 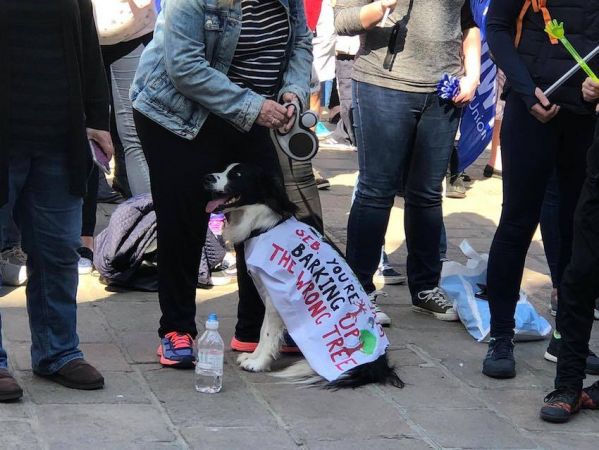 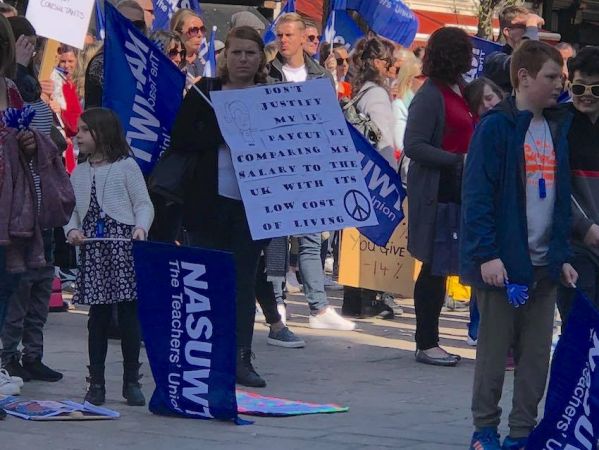 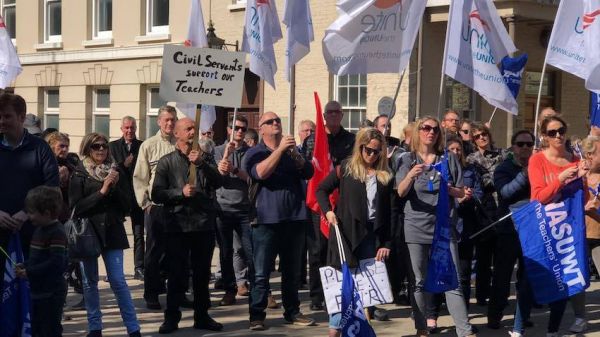 Posted by John Henwood on Mar 27th, 2019
I don't think there will be a problem recruiting teachers from the UK. Local teachers' pay is from 20% (for the higher paid) to over 40% (for the lower paid) MORE than it is in the UK. So the case being made doesn't really stand up.
To place a comment please login Login »

No explanation for late recruitment of Victoria College head