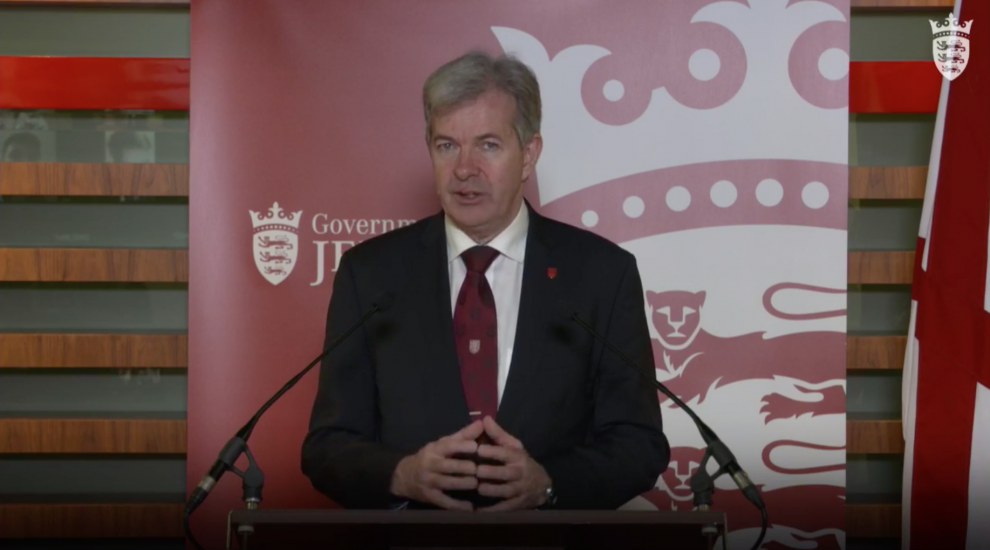 5,000 testing kits are on their way to Jersey, the Chief Minister has said, as he confirmed 10 islanders are currently receiving hospital treatment for covid-19.

The announcement from Senator John Le Fondré came during a web press conference this morning, in which he also said the island was looking to obtain antibody kits.

It came just hours after the island officially entered lockdown because it was not getting results back from the UK quickly enough.

He said the test kits, which will predominantly be for healthcare staff, should be on-island within “the next 48 hours”, later sharing hopes that the island would soon be able to receive results within hours, rather than the current delay period of four to five days.

Video: The press conference this morning.

There had been a suggestion that Guernsey would be able to assist with Jersey’s testing demand after it received the final piece of kit it needed to establish a facility last week.

Senator Le Fondré did not confirm how advanced discussions about sharing the facility were, but said that he had last spoken to the island’s Chief Minister “roughly this time last week” and was hoping to speak to him again “later today”.

This, he said, would be the “start of the road to recovery” for the island, as it would allow the government to find out what proportion of the population has already had - and recovered from - the virus and can return to contributing to the economy or health service.

However, he noted: “I can’t tell you today when they are coming and I can’t tell you [that will be] in three weeks’ time or six weeks’ time… As soon as we know it’s a certainty rather than a possibility, we’ll be delighted to tell people.”

The latest figures show that 81 islanders have been officially confirmed to have the virus. 748 have had a negative result, and two test results remain pending.

However, not all islanders have been tested, with many turned away after calling the hotline, which to date has had more than 11,000 calls.

This morning, the Chief Minister said that there could be as many as “800-odd” islanders who have the illness - “the vast majority of which will not know.”

This prediction, he said, was based on the “rule of thumb” that, for every confirmed case, there will be “about 10 already in the community who have it and don’t know about it”.

The Chief Minister confirmed that, at present, the government believes it has the right amount of beds and equipment available.

He described the hospital as having “plenty of room”, noting that Overdale could also be “clear[ed] out” and that nursing homes could also be used.

Pictured: Journalists asked their questions via a video chat to allow the press conference to take place under the rules of social distancing.

Nonetheless, he explained that the government was open to considering other locations, such as hotels, to put up patients.

In total, he estimated there were “an extra 600 beds… over and above what we’ve got in the hospital”.

Asked about PPE for health workers, Senator Le Fondré said he believed the hospital already had “enough gowns”, but added that a bulk order of 20,000 face masks has either just been received, or will shortly be received, as well as an increase in the supply of gloves.

He noted that there were “other orders in the pipeline” - one due “imminently, and another further away”.