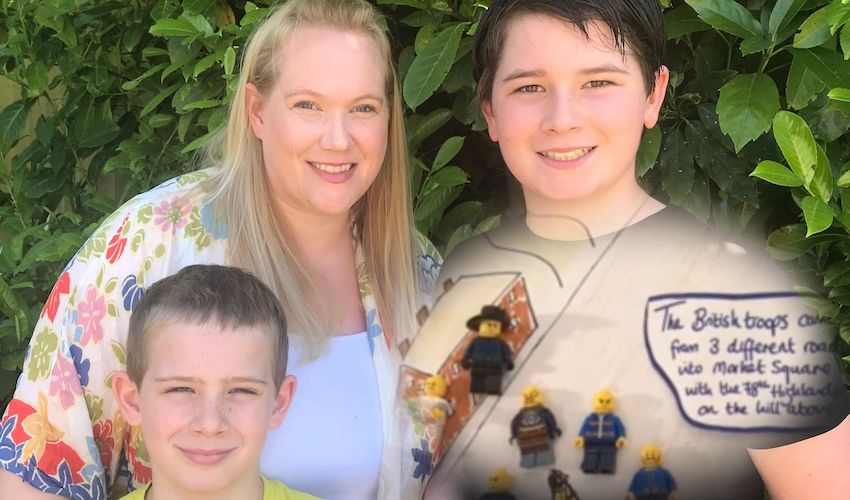 An islander has recreated the Battle of Jersey with Lego characters in a stop-motion video with the help of her children.

Helen Otterwell, Learning Manager at Jersey Heritage, normally helps with the re-enactment of the Battle of Jersey in the Royal Square

But this year, due to the corona virus pandemic, this was not possible.  “It was such a shame we have not been able to do that,” she told Express.

Video: Helen recreated the Battle of Jersey in Lego with the help of her sons, Ethan and Zachary.

While talking with a teacher at Springfield School – who were to be involved in the re-enactment this year – she started thinking about how to introduce the story in an easy way.

As her boys, Ethan (11)  and  Zachary (8), had been watching stop motion videos on the Battle of Hastings, she was inspired to do the same with the Battle of Jersey.

She started working on a story board with their help and all three raided the children’s Lego to find suitable bits and pieces for the video.

“I had never done any stop motion video,” Helen said. “I got to be taught by my children. It was lovely.

“I was surprised how long it took for such a short thing. I do not think I will have done it by myself.”

After two days of work, the video was all filmed and edited. Zachary was then recorded narrating the story for other children.

The finished video was sent to Springfield School and shared with other pupils.

Jersey Heritage also shared the video on their Youtube channel much to the delight of Ethan and Zachary.

“We can use it to teach at any time,” Helen said.

Following the success of this first venture into stop motion animation, Helen and her sons are already thinking about their next project.

“We really enjoyed doing this,” she added. “We have all learned something.”