WATCH: Covid war ‘not over until we have treatment’ 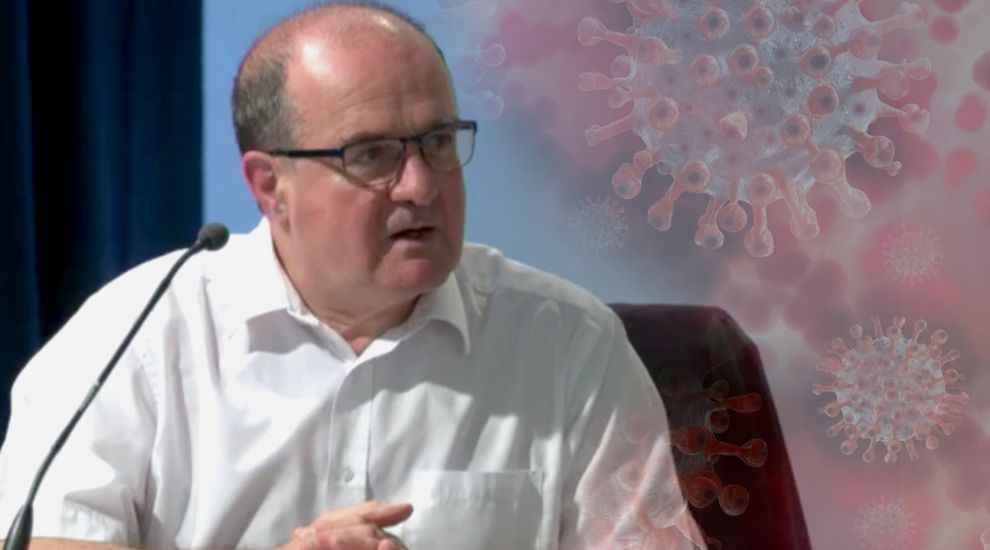 WATCH: Covid war ‘not over until we have treatment’

The battle against covid – and the Government’s need to intervene in islanders' lives – won’t be over until there is treatment, according to the island’s top pandemic medic.

Despite covid case numbers surging to 81, with more than half of islanders fully vaccinated and no one in hospital with the virus for three months, the Chief Minister yesterday said islanders were heading towards a “summer of freedom”, with the lifting of Jersey’s final covid restrictions mere “weeks’ away”.

But that doesn’t mean we’re at the finish line, according to Dr Ivan Muscat MBE.

Asked by Express at what point STAC would be able to recommend that dealing with covid becomes a matter of personal responsibility for islanders, rather than Government intervention, he said the criteria was some way off being met.

"The virus isn’t static, it moves, it mutates…There will be new mutations coming along invariably because that is the nature of the virus,” he explained.

“And so we will need to adapt to those mutations, but we hope that with further developments in vaccination, which cover variants as we go along and other measures like in particular the availability of treatment.

“So, the four pillars for managing infection - diagnosis, infection control or [Non-Pharmaceutical Interventions], vaccination, they’re in hand - but the fourth pillar, treatment, is not yet available to us.

“Once that becomes available to us - and there are drugs in the phase 3 trials at the moment - then we will be in an even stronger position to manage it and to relegate covid to a background infection.”

Dr Muscat added: “We do need to be vigilant, we just don’t know enough about the virus to say we can now sit back and relax."

The confirmation will not be welcomed by the nearly 400 islanders who have signed a petition calling for the Government to “give us back our freedoms” and allow the island to “life with covid-19” by removing all laws.

This doesn't stop until we say it does https://t.co/3jkC8HF6bs

It has been reported that the UK Government is planning to drop laws around masks, which are already no longer legally required in most public areas in Jersey, and distancing in favour of a ‘personal responsibility’ approach on 19 July.

Dr Muscat’s warning that the island was not yet out of the woods came during a press conference in which Ministers confirmed:

Government officials told Express that they would be continuing check-ups on isolating individuals to ensure that no one has wrongly left quarantine following yesterday’s announcement.

Questions were raised about the uncertainty over the reopening of nightclubs and stand-up drinking in pubs after these were pushed back during the conference, but Economic Development Minister Senator Lyndon Farnham expressed confidence about the “clear pathway” to lifting these restrictions and went on to emphasise the financial support Government has put in place throughout the pandemic to “ensure islanders’ jobs and livelihoods were protected.”

To further support businesses, Express asked how he would like to see the remaining £20.4m in the Government’s Fiscal Stimulus Fund – a money pot to restart the economy - used.

On Twitter, Digital Jersey CEO Tony Moretta had raised the prospect of a new Innovation Fund.

Opportunity to set up a genuine 'Innovation Fund' to attract, support and invest (in return for equity this time) in the businesses of the future? @KirstenJersey https://t.co/POLSSEVj1V

However, Senator Farnham urged “caution”, saying: “To be clear… that’s [£20.4m] less that we would have to borrow, so there’s a subtle difference there.

“I think given the financial challenges we’re facing coming out of the pandemic, it’s unwise to borrow without having a really good idea what you want to borrow for and there are a lot of ideas going around at the moment.”

Joking that it was “the most prudent answer you’ll hear from the Minister for ED in a very long time”, the Chief Minister said he agreed.

“…We’ve got to keep focus about what we’d love to do and the nice-to-haves, and the fundamentals are the more we add onto the bottom line, the more ultimately that we are borrowing, and we are trying to get that balance between supporting everybody that we have done and, I’ll use the word, ‘a prudent financial outcome’ in the context of the amount we’ve had to actually borrow and spend to get the island where we are today.”

He declined to state how much the Government had borrowed from its £500m covid loan so far when asked by Express in a follow-up question, but did reveal that it was “significantly not as much as we were originally projecting - and I’m talking tens of millions of pounds lower, not a million pounds lower.”

Elsewhere in the conference, he confirmed to Express that the Government was still planning to charge for covid-19 testing in future, having considered a £36 charge per test back in March.

He said how much and when this change would happen had not be decided, but that he was keen to ensure it was affordable so that businesses in hard-hit sectors like hospitality were not adversely affected and families would not have to pay hundreds to go on holiday.

Posted by IanSmith97 on Jun 24th, 2021
I thought we had treatment. If not what were all those people doing in hospital?
Posted by Martin on Jun 24th, 2021
I think it is 'high time" Dr Ivan Muscat is removed from the position of Deputy Medical Officer of Health & given the full title & role as he has carried us through SUPREMELY testing times & has ALWAYS been there "in the Park" outside the Hospital answering questions to appease the public and when he has not had THE answer he says so rather than waffling & diverting like others have!

No one can always have the answer in such a testing time! He has also given his undiluted displeasure about fools who have broken the C19 restrictions! Ivan certainly HAS the minerals!

Ivan must be one of the busiest persons on this rock & I would like to have seen the Chief Minister making much more of a public stance as when new ascending stats are released there is often very little or No explanation as to why, & I am sure the public would be more reassured if we saw him in the front line?
Posted by Sheila Young on Jun 24th, 2021
I have just read the following article in the JEP about Tranmere Rovers football club not using the islands training facilities as they were hoping to in July - "But obviously Covid is the problem and when Wirral was designated as “red” in the Covid lottery, the consequence of that was the players would have had to isolate for a week. When it’s a week-long trip, there’s no point in coming.’
Yet your article clearly states people from Red areas only have to isolate on day one until they get the results of their first test. No wonder people are confused, surely the players have had both vaccinations so what is the problem here?
Posted by Jon Jon on Jun 24th, 2021
Muscat is correct ,we are far from getting out the woods,only four hundred signing a petition so far to get back to normal life! Normal life is now I’m afraid,as fo Perchard ,maybe he needs to play cricket!
Posted by John Henwood on Jun 24th, 2021
Much as I appreciate Dr. Muscat's dedication, one must remember that he is a medical doctor and has taken the Hippocratic Oath and so will always pursue a best possible medical solution. However, that is not always the best solution for the greatest number of people. Also, Dr Muscat was not appointed by us; we appointed States members to make these key decisions and they should take a balanced view. Sorry Dr. Muscat, but there will be occasions when your singular view should be overridden. We must get back to living our lives and not continually be made to walk in fear of this virus.
To place a comment please login Login »