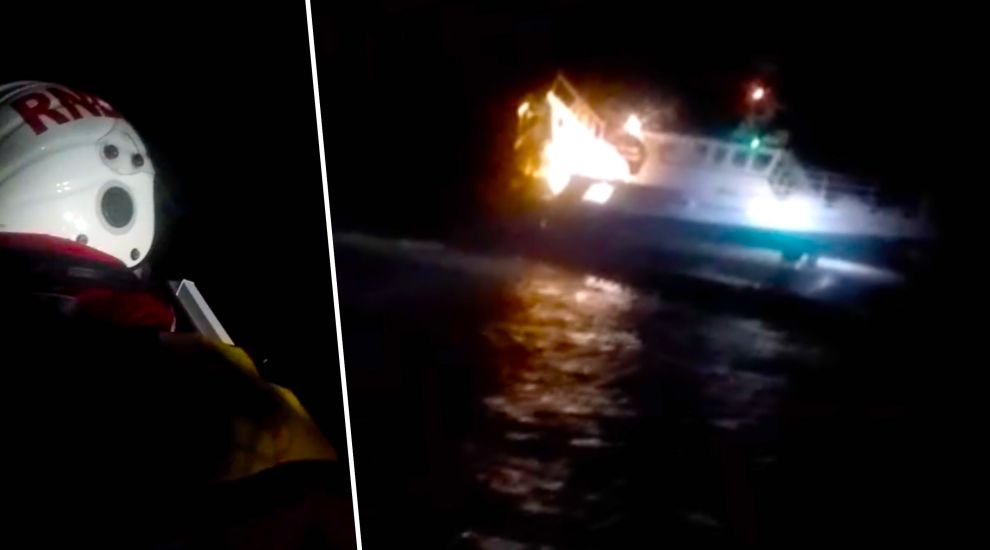 Four Granville fishers – and two divers sent to inspect their stricken boat – had to be hoisted to safety by helicopter after their 18m trawler struck rocks near the Écréhous in the early hours of Saturday morning.

Shortly before 02:00, the Le Tiberiade crew sent an alert to the French maritime authority that their boat was in great difficulty and could sink.

Contact was then abruptly cut as the crew attempted to evacuate the ship, which was rapidly flooding with water.

The Caïman helicopter of the French Navy, the all-weather SNS067 Mona Rigolet de Goury of the France's National Society for Sea Rescue (SNSM), and the RNLI from Jersey were called to the area to help.

As the team made their way towards the Écréhous, French authorities diverted another fishing boat to clear the rescue zone.

Conditions were particularly challenging for the sea rescuers, with the RNLI operating "in total darkness and on a spring low tide".

Before they reached the area, the Caïman Marine helicopter crew spotted the endangered fishers, who had managed to make it onto a liferaft.

The helicopter crew then winched the four fishers to safety.

According to French media reports, one of the group was taken immediately to Coutances hospital.

Two divers were then sent to survey the condition of the boat, according to France Bleu.

The French radio channel reported that the duo identified a leak and began to repair it, but were forced to jump into the water for safety as the rising tide and current began pulling the boat. They too were then winched to safety by the helicopter.

Carried by the current, the boat was refloated a few hours later. Two SNSM crew members were transferred on board and managed to restart it. The vessel was then escorted back to Granville.

The St. Catherine's RNLI crew recovered the liferaft and stood by the casualty vessel until salvage operations were able to start.

They returned to station at about 05:00 where the lifeboat was refuelled and readied for her next service.

The French maritime authority later praised the “effectiveness and reactivity” of everyone involved in the rescue.