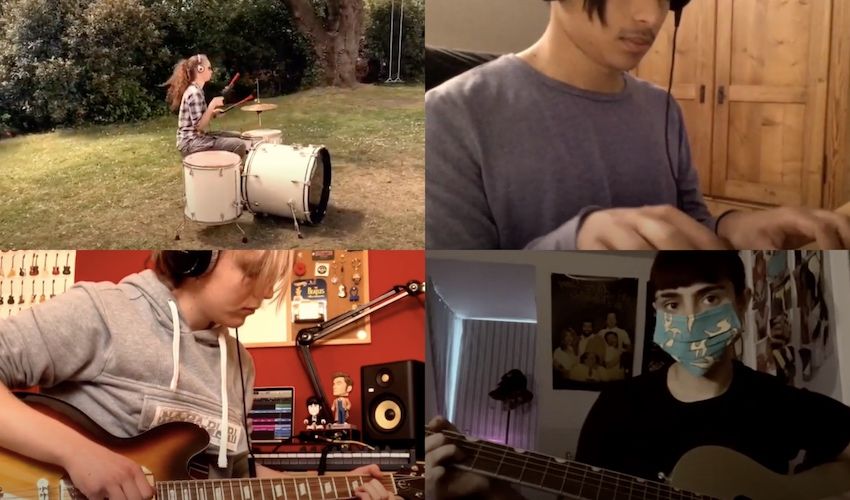 Six Year 12 students have worked together on a lockdown-themed single titled ‘Standing Free,’ before making their own unique remix of the track.

‘The Quaranteens’, who are all studying the Music Technology A Level course, recorded, mixed and mastered the song in isolation under the direction of Beaulieu’s Head of Music, Leigh Saunter.

Mr Saunter explained that when the corona virus pandemic forced all schools to close, the students had already finished their course.

“We were in kind of a holding area,” he explained. “We started thinking about what we could to that would benefit the students.”

As most of the A level coursework is done individually, Mr Saunter decided to get the students working on a collaborative project that would make good use of their composition skills.

He first set out the students the task to look at the “values” of the current number one hit to try and find what made it successful.

Having identified what makes a good song, the students had to apply it to their own track.

They all worked in isolation on their respective parts, keyboards for Seb, electric guitar for Alex, acoustic guitar for Sofia and drums for Laila*. The two girls also recorded the lead and backings vocals.

The group then took the different elements and “build” the track, reworking it until they had a “finished product”, whose keyboards are reminiscent of The Weeknd’s hits.

Once the track ready, the students got working on their own again to come up with their own unique remix of ‘Standing Free’.

“I was really impressed,” Mr Saunter said. “It went as well or better than I expected.

“I have enjoyed the remixes. I like being surprised!”

The collaborative project not only helped the students put their learning into action but also helped them maintain social interaction throughout lockdown through regular discussions about the different stages of the project.

Mr Saunter also says it helped them learn about different aspects of the music industry.

“They have had to listen to people criticising their work and then rework it, that’s what happens in the music industry,” Mr Saunter explained.

“Normally I am the one who listens to their work but this time their peers were saying ‘let’s change it’, ‘let’s put this ending in’. They all worked as a team.

“It’s been a good learning curve.”

Since the song’s release, the students have been tracking where it goes and were delighted to see it downloaded as far as India.

Mr Saunter hopes the song will not only serve as a nice memento of the last few months but will also help the students’ future career prospects.

“It’s a different thing to have been involved in, it’s a massive talking point,” he said. “It will make them stand out.”

*The other two students have chosen not to have their names published.

To listen to the six different mixes, click here.