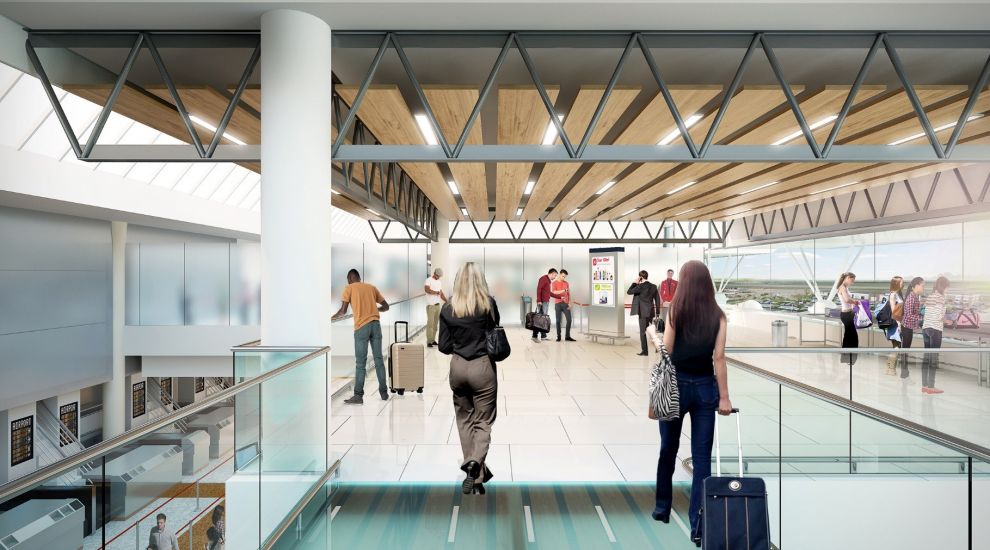 A viewing area and VIP lounge are being explored as possibilities for the new £42m airport, officials have confirmed, as they revealed a number of new features to be included in the final building.

Ports of Jersey released plans for an overhaul last year, which would see the space transformed to include a 2,300sqm mezzanine floor opening to a security area and spacious departures lounge offering views of the aircraft.

Asked for their feedback, many islanders called for the return of the “very much missed” public viewing gallery before security. “Stick a coffee shop there and people would stay,” one islander suggested.

An update released by the design team yesterday said those views had been taken on board, and that the “creation of an exterior terrace that could provide a viewing option for both travellers and non-travellers” was being investigated.

Video: Ports of Jersey released this clip of what walking through the departures area will be like yesterday.

However, they warned that the area was “not easy to create” and could have a “significant cost implication.”

“…But recognising that this is a highly desired feature, it is something that the team will continue to evaluate in terms of delivering it,” they said.

A restaurant for non-travellers similar to the former Aviator, which closed in 2009 after a decline in custom, was also requested by islanders, but the project team said that they so far had not identified a “viable option” for this.

Passenger feedback has, however, resulted in the creation of a child’s play area to feature in the airside departures lounge, alongside a sensory room and multi-faith room.

Video: The arrivals area will no longer be located in the 1937 building, which will be demolished.

Group Capital Project Director for Ports of Jersey, Steve Tanner, who is overseeing the overall redevelopment programme, commented: “When we first launched this exciting project in late 2017, we wished to actively engage with interested parties and members of the public to seek their valuable feedback and suggestions. We are delighted with the response we have received so far.

“Now that we are moving into the final stages of the design process we have considered all the suggestions submitted and are now in a better position to update on progress to date, which is now available to view on our website. We hope our latest programme update will provide a better idea and understanding of our decision making process so far and the reasons for our actions. However, this engagement process continues and anyone who would like to make further comments and suggestions can still do so by emailing futureairport@ports.je.”

Redevelopment works, which will include the demolition of the 1937 arrivals terminal and the relocation of the Airport Rescue and Fire Fighting Service building, are said to be still be on track to start at the end of this year.

If all goes to plan, the new facility could be ready by mid-2021.