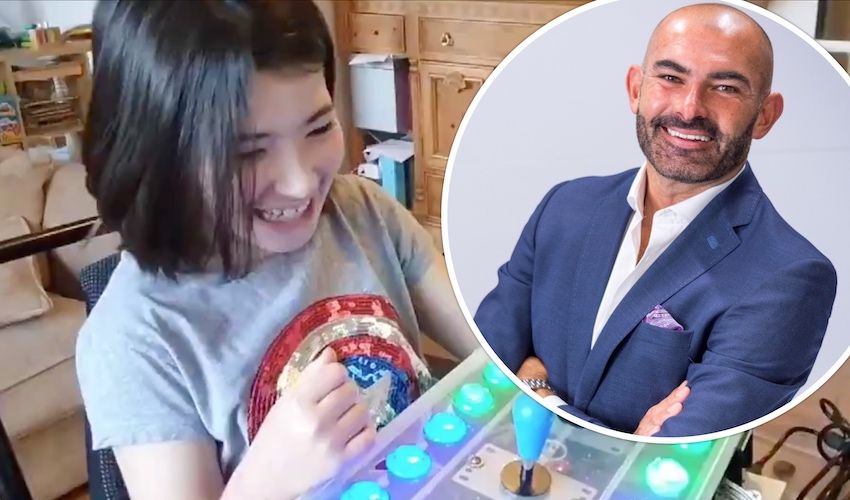 A local tech guru and father who has invented a way for his daughter to play her favourite video game has caught the attention of major players in the tech and gaming industries.

Using an adaptor and some parts he ordered online, Head of Digital Jersey's Academy and Express columnist Rory Steel has opened up the world of video gaming for his daughter, Ava, whose rare genetic disorder limits her motor skills by creating a controller she finds easy to use.

Due to her HSP, Ava’s speech and finger dexterity is impaired, but her father wanted to find a way for her to play the latest video game “like her friends”.

In a video that went viral on Twitter and was then reposted to popular forum site Reddit, Rory shows Ava smiling as she plays ‘Zelda: Breath of Wild’ on the Nintendo Switch.

Finished! Ava gives my homemade #accessibility controller V1.0 the thumbs up. She can play @Nintendo #BreathoftheWild on her #switch like her friends now. All thanks to @Microsoft #adaptiveController #XAC @brycej @ArranDyslexia @shanselman pic.twitter.com/dOhGnUFZa0

The invention has attracted the attention of tech giants and even one of the voice actors from the game itself, Joe Hernandez, who described Rory’s work as “beautiful and inspiring” and asked him to get in touch so that the game developers can “do something nice” for Ava.

Overnight, the video has racked up over 600,000 views with hundreds of people contacting Rory congratulating him on the controller and asking him to get in touch – including Microsoft and Logitech.

As Logitech offers to help him develop version 2.0, Rory says that he’s going to work on a “walkthrough guide for all those who want to have a go themselves.”

The #1 quality of a digital professional... Patience... Making inroads with the aid of coffee! The controller project is on target for this afternoon. #accessibility @Nintendo #switch @Microsoft #adaptiveController pic.twitter.com/U5z1xjzROe

Entertainment platform LAD Bible have also asked Rory if they can use his clip.

Explaining in the video how he has created the device, Rory says: “So what we’ve had to do here, is we’ve had to make sure that we map all of the buttons to the Xbox adaptive controller here. So that we can move around and Ava can choose which buttons are actually more useful in different locations.”

He tells viewers that this is just “version one” of the invention, and explains ways that he could adapt this model into a “sliding wedge shape” so that Ava can more easily rest her arms on the controller as well as changing the location of its buttons.