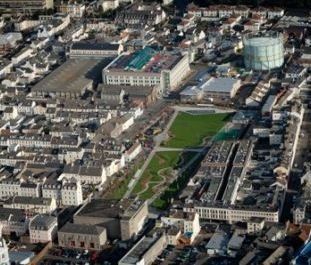 Plans for a second block on the Jersey International Finance Centre and apartments next to the Co-op Grand Marché that have been condemned by campaigners are due to be decided today.

Both sets of plans have been recommended for approval by Planning officers when they go before the Planning Applications Committee later today.

The plans are part of a full agenda for the committee, which is meeting at St Paul’s Centre.

The Jersey International Finance Centre plans would, if the politicians on the panel agree, give the go-ahead for the second building on the Esplanade car park site.

The website of the developers says that work is expected to start on the site by the end of March.

The other major application due for consideration is for 169 flats on the site at the back of the Co-op Grand Marché that takes in the old BOA Warehouse and surrounding buildings.

Developers have cut back the plans from the original proposals for 183 homes, but the initial proposals were condemned by campaigners for trying to “cram residents into boxy flats like sardines”.

Save Jersey’s Heritage President, Marcus Binney, said at the time: “We are not opposed to some housing on the site but the scale of what is proposed is overwhelming.

“Protecting the countryside is essential and it makes good sense to encourage town-living. New projects, however, should demonstrate an appreciation of their surroundings – and we are not convinced that this one does.”