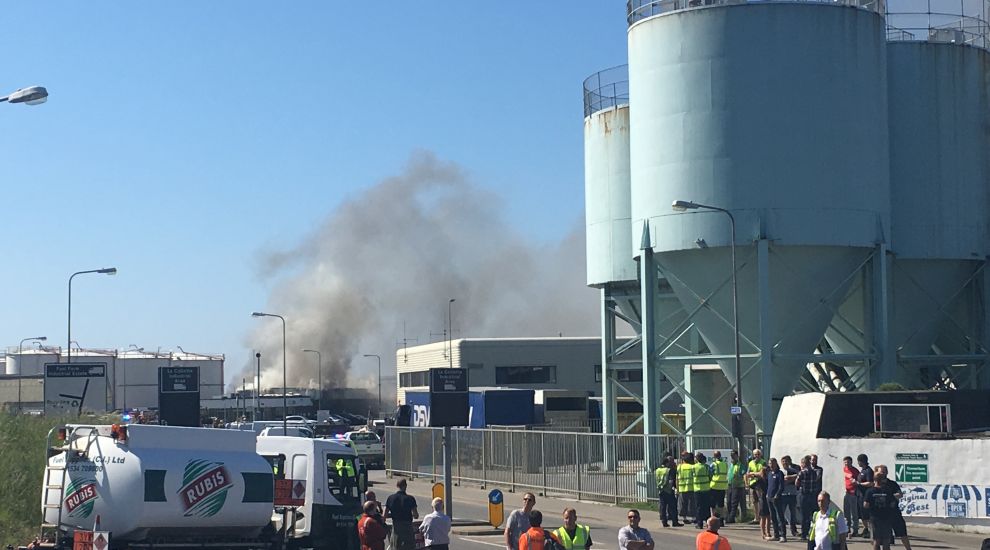 A fire that broke out at the La Collette reclamation site shortly after 10:00 has been brought under control, but damping down operations by firefighters in breathing apparatus continue. One man was taken to hospital for minor burns.

Fire Service have confirmed the fire started in PDJ stores, where the lubricants are kept, but have yet to confirm what sparked the blaze.

The initial call to the Fire Service was made at 09:55 and two appliances were sent to the scene. Jason Masterman, the Station commander, explained that they had been relieved to see it wasn't as serious as some sources had implied. He said: "When we see such a sight at La Collette fuel terminal you always expect the worse. I'm sure that by-standers, the public and the media initially had reports that there was a fuel tank on fire, or a gas main on fire. It was comforting to know that it wasn't such a fire but that it was within a store that contained batteries, fuels and a truck."

They issued an 'amber alert' which the Station commander explained is declared when "the resources are pushed." "It was extremely challenging. The initial crew when they arrived took a severe punishment from the temperature and the smoke. All firefighters were exposed to extremely hot temperatures.

"We worked closely with the Ambulance Services and the Police created a welfare area for them to remain in the shade. In a case like this we will always rotate crews so that we have fresh firefighters on the scene to carry on their activities."

25 firefighters in total were tackling the blaze with five foam jets and the Fire Service say they sent three fire engines, a foam tanker, two support 4x4 vehicles and a command vehicle to the scene.

They also called for extra back-up, including on social media where they asked all off-duty firefighters to report to HQ as soon as possible.

Police were also on the scene and closed down the road, which has since been reopened.

We are currently assisting our Fire Service colleagues with a fire at La Collette. Please avoid the area - road closures are in place.

Islanders reported viewing dense plumes of thick black smoke from as far as the Weighbridge and Liberation Square.

In a message on their Facebook page, the Fire and Rescue Service thanked the Department for Infrastructure for their support in setting up a relief centre and providing refreshments for "exhausted fire crews.

Although sources said the alarm system didn't go off when the fire started, implying that there had been a failure, Jason Masterman explained that it simply hadn't been activated. "The evacuation signal is part of the off-site emergency plan and is instigated by the Fire & Rescue Service. It wasn't invoked today because of the size and the scale of the incident that we responded to. On our arrival we surveyed the area and assessed the fire and we decided not to invoke the emergency siren."