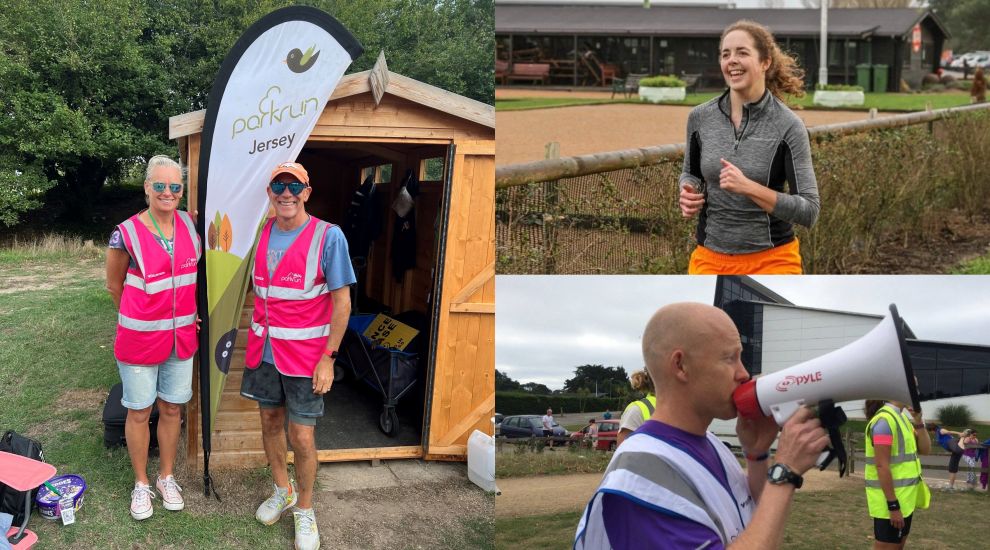 Since 26 September 2015, there have been 306 parkruns in the island – tomorrow will mark parkrun number 307 – with an average of 275 runners, joggers and walkers taking part each week.

In total, nearly 12,000 participants have covered Jersey parkrun recording over 84,000 times, including 14,221 ‘personal bests’. Those ‘parkrunners’ include some from all over the world who often visit the island just to do Jersey parkrun as part of a ‘tourism alphabet’ of parkruns.

They covered 420, 250 kilometres, which as Event Director Michael Chaylor said means “we have been to the moon (384,400 km), around it, and are now on our way back". “It’s so amazing considering this is a Saturday only event!”

The parkuns wouldn’t have gone ahead without the help of 765 different volunteers of all ages who have helped out over 6,311 times. Over the last four years, Jersey parkun has also been actively supporting Duke of Edinburgh volunteer schemes.

Marking the special anniversary, Bailiwick Wellbeing spoke to some of the people working behind the scenes to make parkrun happen week after week, as well as longtime runner Rosie Adamson, to find out what they like about parkrun... 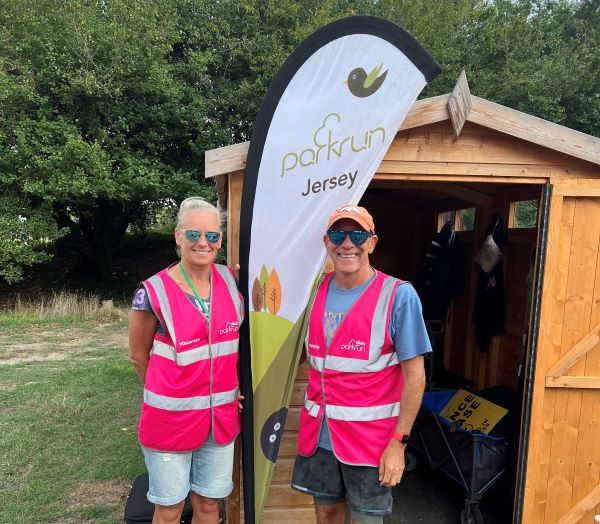 Michael Chaytor an the parkrun for the first year before joining as a Run Director. He then took over the organisation of the event with Sam Horsfall, who had volunteered from the start in September 2015, as Event Directors in 2016...

Michael: I knew about and had ran at parkrun in the UK before it arrived in Jersey. When it started in the island, I ran it for about a year before starting to volunteer regularly then switched to volunteering every week.

Sam: I'd never heard of parkrun until Paul Burrows, who introduced it to Jersey, asked me if I wanted to be involved with the setup/Run Director side.

Why did it appeal to you?

Michael: I was a regular runner and the way it was set up, each Saturday, 5km, free(!) and timed, it was great to run this with my family. That said, once I started to volunteer, I saw a completely different side to what parkrun had to offer and preferred to volunteer to make the event happen, rather than run.

A great morning ????☀️as 282 people ran, jogged & walked the course, with 39 first timers & 29 PBs all made possible by the 25 volunteers. Congratulations ???? to the @JerseySport #movemore 5k graduates ???? & lovely to see a number of @Run4Kezia t-shirts on the course #loveparkrun pic.twitter.com/AHu23Xt2JY

What made you want to volunteer?

Michael: I decided that one week I would volunteer instead of run. I stayed behind and had a coffee with the team and saw how the results all pulled together and other parkrunners stayed for coffee and conversation.  I loved this aspect kept volunteering until finally joining the team as a Run Director and then Event Director.

Sam: I'd never been interested in volunteering before at some of the other clubs I'd been with, but when I lost my job back in 2015, due to a serious health issue, I was struggling a bit. So when Paul contacted me asking if I wanted to be involved I knew I needed something new to focus on and I've never looked back!

What would you say has been the main benefit of being involved in Jersey parkun?

Michael: Seeing the huge range of people running, jogging, walking and volunteering each week in a totally inclusive event is awesome. It is truly humbling to be helping people of all age groups, abilities and capabilities coming together and having fun doing what can often be a significant challenge physically, mentally and emotionally. I absolutely love that about parkrun and when you add in such a great team of leaders and organisers donating their time to make it happen it’s inspiring.

Sam: I have made some wonderful friends through Jersey parkrun and absolutely love starting my weekend off by spending Saturday morning volunteering with them. I also love seeing how inclusive parkrun is, in that it doesn't matter whether you are a speedy 16-minute runner or a 50-minute walker! We have great fun volunteering and it’s amazing to see people getting involved who don't even run at all, giving their time up to make this amazing event happen.

How would you convince more people to join?

Michael: All I would say is try it, either a walk, jog run or volunteer.  Whatever your goals are, whether to get fit, lose weight, be more sociable or just improve your general well-being, parkrun has something for everyone.

Sam: You don't get many things anymore for free, so why not come along and try it! We are so inclusive - it doesn't matter what you wear or what you look like, bring a friend, and start your Saturday with a smile! 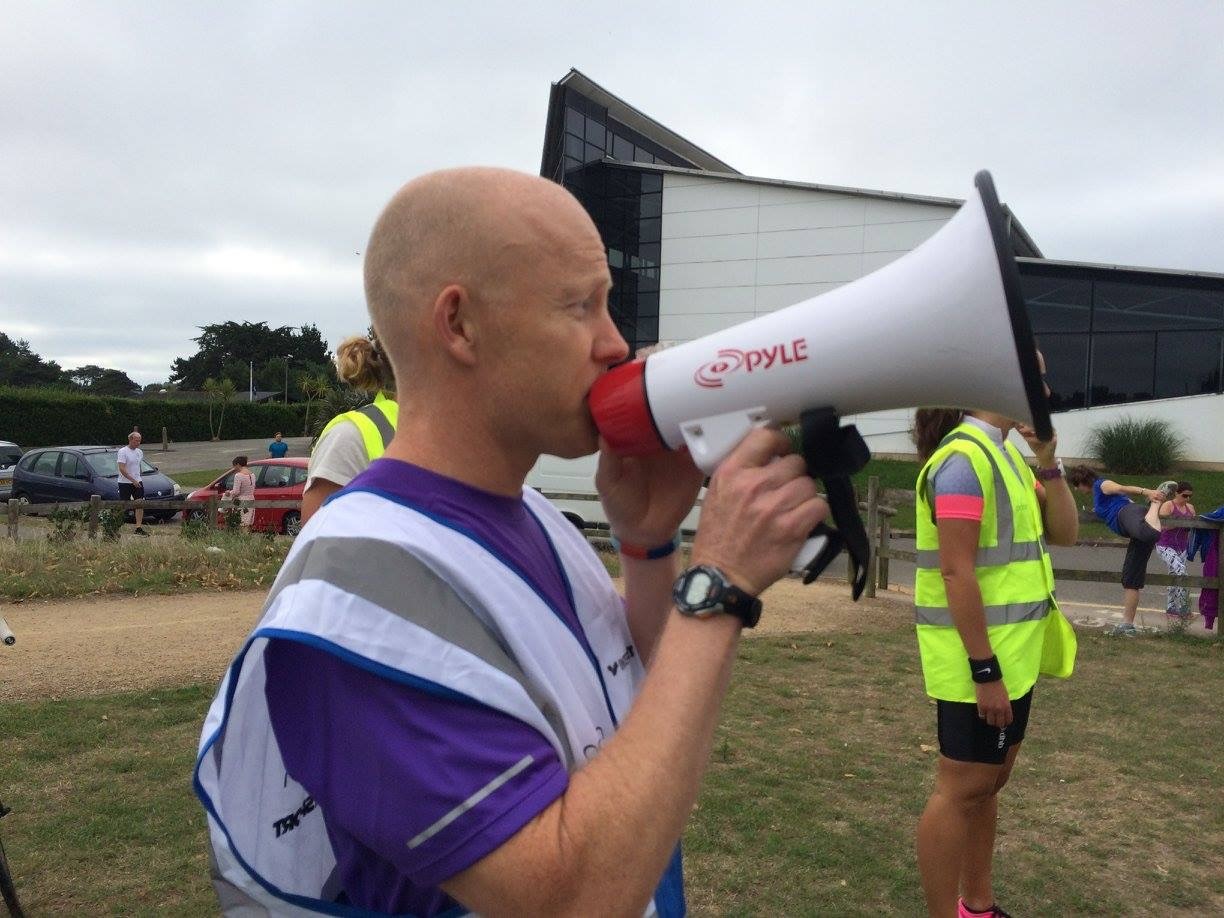 Matt Cuthbert (47) has been involved with parkrun since the early days in September 2015 and has volunteered 210 times...

I was contacted by Paul Burrows when he was bringing parkrun to Jersey, who asked if I would like to be involved as a Run Director. That was back in 2016 and the rest is history!

What made you want to volunteer and what does it involve?

I had been running for a number of years, but due to an illness, I was forced to stop, so getting to volunteer and help others was a good therapy. As a Run Director, I am responsible for the organisation of the weekly parkrun on a rotational basis with the other Run Directors. When not acting as a Run Director, I also fill other roles on the roster like timekeeping, barcode scanning or marshalling.

So the volunteer roster is filled and everything is prepped for our 300th parkrun tomorrow, all we now is you to come run ????????‍♀️ walk or jog ????‍♂️#loveparkrun pic.twitter.com/z8JZokh0ER

What is your favourite thing about Jersey parkrun?

Seeing other people enjoying the running and being active, across all age groups and sexes.

What would you say to other islanders who are thinking about joining but aren’t quite sure they have the right level?

Parkrun is whatever you want it to be - you can run, walk, jog or volunteer! You take it at your pace, nobody is ever last! 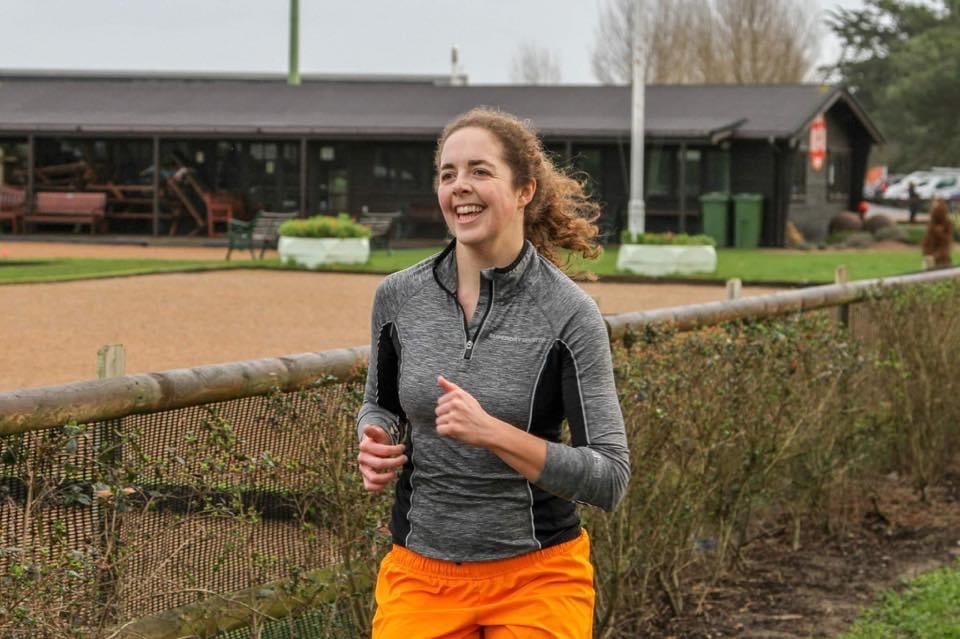 Rosie Adamson (28) has been a regular participant since she first joined in November 2016.

She has since run/jogged/walked in 145 parkruns across seven different locations with her fastest time being 20.51 and her slowest 1.09.02 – both linked to “special memories” that she treasures. She has also volunteered at 37 parkruns...

I first participated in November 2016 but had been hearing about it from friends for a little while before I decided to give it a go.

What made you want to get involved?

I had recently come back to the island after graduating from university and was looking for ways to meet people and make friends. I also liked the idea of a regular no pressure run that you can complete at whatever pace you feel like. 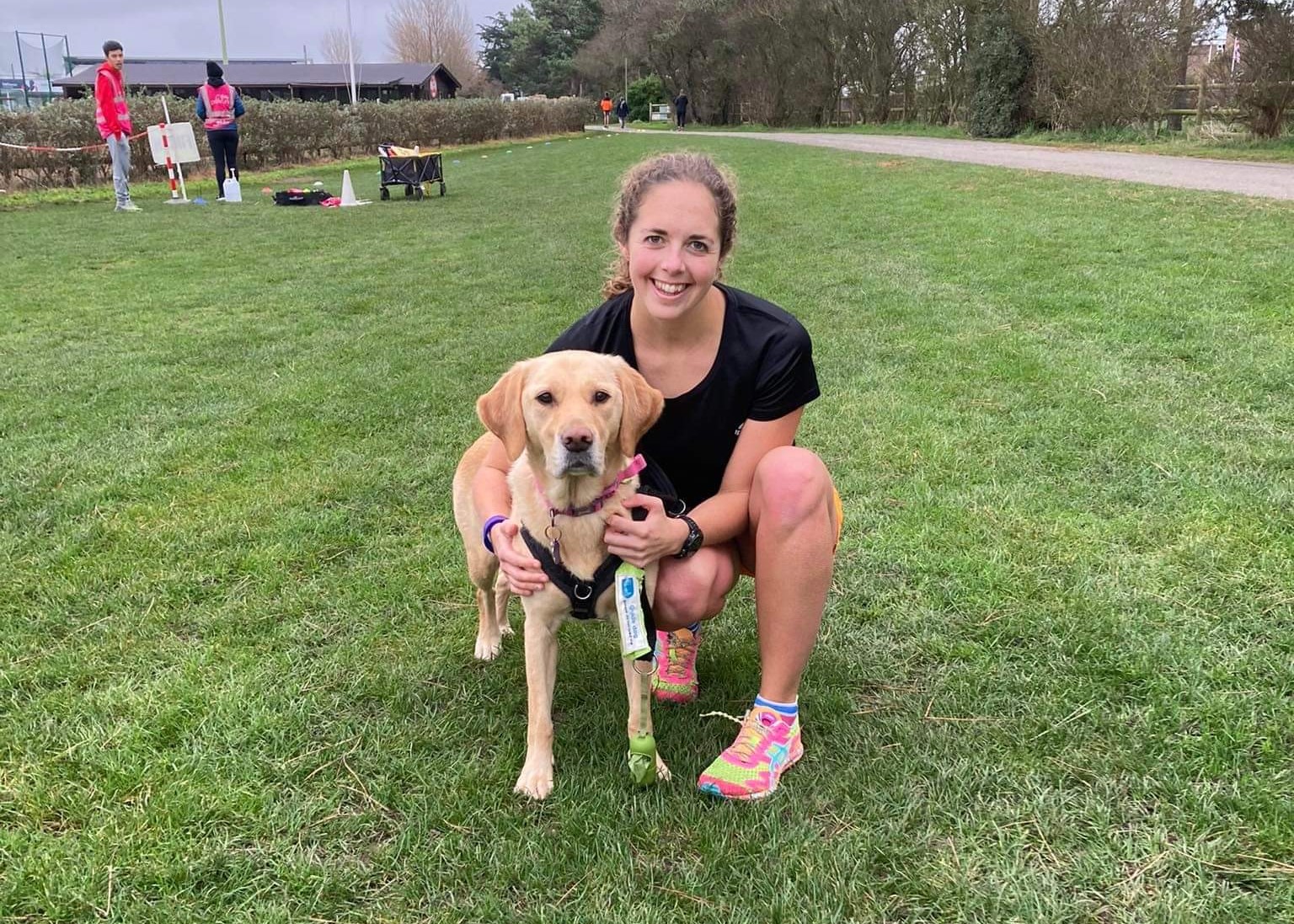 Pictured: Rosie and guide dog Nan. "It’s always a pleasure getting to run with her," Rosie said. "Her owner, Jenny, completes parkrun with a VI guide runner and always asks if someone will run with Nan so that she gets to join in the fun."

Were you already running regularly when you joined parkrun?

I wouldn’t say that I was a regular runner, but I have always enjoyed going for a run. Before 2016, I’d probably have gone for a couple of runs a month at most. I think the idea of a big group event was what made me hesitant to join at first but when I turned up for my first parkrun, I realized how wrong my preconceptions were.

I arrived at about 08:45 and found the well-marked start line which already had a few people gathering. I was immediately welcomed by a group of regulars and made to feel at home. While I was still a bit nervous about actually running 5km, meeting such friendly people helped calm my anxieties.

These start line acquaintances and soon to be friends cheered for me at crossover points on the course and congratulated me at the finish, making me feel like I belonged. 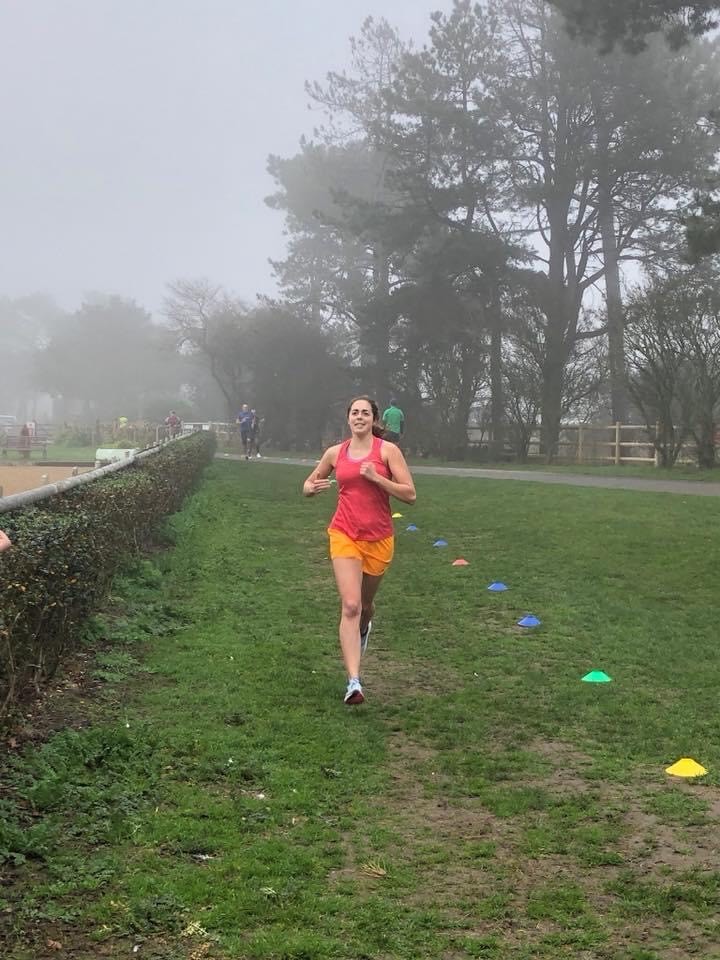 Pictured: "Taking part in parkrun has given me the confidence to enter and train for other many subsequent events, that otherwise I’d probably have thought were “not for me," Rosie said.

I don’t believe that my story is that unusual, in fact I think the kind of camaraderie that I have experienced ever since that first parkrun is what parkrun is famous for and what attracts so many people every Saturday. Taking part in parkrun has given me the confidence to enter and train for other many subsequent events, that otherwise I’d probably have thought were “not for me”.

Running and parkrun are now a core part of my routine, and I wouldn’t have it any other way.

What would you say is the main benefit of park runs?

I think the main benefit for me is the social aspect. I have met so many lovely people over the years at parkrun, including my partner! However, I think the social aspect is heightened by sharing the experience of running 5km or volunteering. The positive energy you get, as the endorphins flood in, after you cross the finish line make it impossible not to leave with a big smile on your face and some firm friends who you know you will see again soon.

If you wish to join Jersey parkrun (or anywhere else in the world) as a runner, jogger, walker or volunteer, simply register at parkrun.co.uk and print off your barcode.

This article first appeared on Bailiwick Wellbeing, your exclusive weekly guide to keeping a healthy mind, body and soul in Jersey. Sign up for free here.

AGONY AUNT: "I don't have any hobbies. Not a single one!"