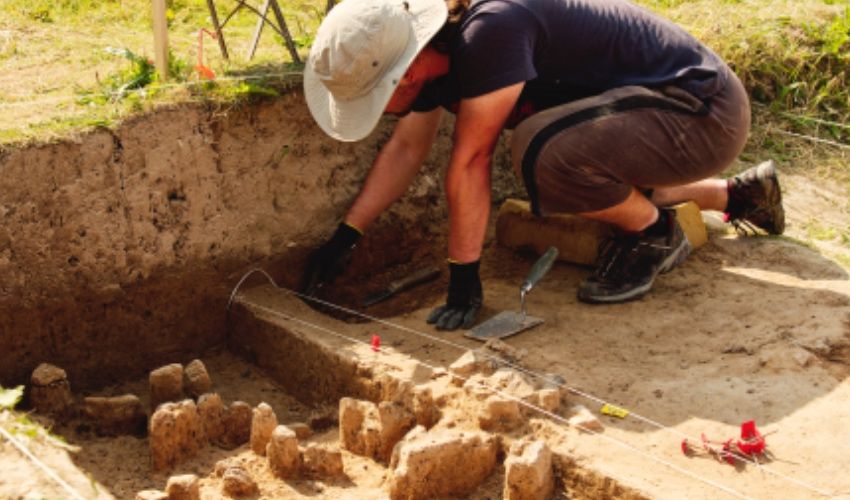 Work has halted to repair a damaged dolmen after engineers found remains of a Roman housing estate buried under it.

Heritage groups were hoping to fix the La Sergente Wilson dolmen in St. Brelade - a prehistoric hall believed to be used by a unit of the Neolithic Home Guard - but were surprised to discover the foundations of a 2,000 year-old settlement beneath.

Plans to build more than 300 affordable 1(1)k apartments on the site have now been torn up after Planning said it would not allow the building of any subterranean swimming pools and gyms in case they disturbed the ruins.

Describing the find, Dr Archie Ology said: “We were scraping away some soil around the dolmen when slowly, before our eyes, the letters of a long-buried sign started to appear: A-N-D-I-U-M.

“As you know, Andium was the Roman name for Jersey so we could easily identify the age of the sign. We then brushed away the letters H-O-M-E-S, so it was clear this was a Roman settlement.”

Dr Ology said that, since then, they had discovered three Roman swings, a bath and some type of sporting racket, which the team suspects belonged to the ‘Caesarean Tennis Club’ which is known to have operated in Andium at the time.

He added: “Roman high society was very interested in settling in Jersey, where they could bury their hoards of plundered treasure to stop their enemies getting their greasy mitts on it.

“There are rumours that there are lots of other buried loot around the island, in fields in Grouville, St. Brelade and St. Ouen, as well as along the Esplanade.

“They were all very well hidden but we’ll find them one day, I’m sure.”

Government shows its true population policy in its online marketing this week:

Posted by Rex Cardy on Mar 27th, 2022
I heard they even dug up notes proposing a new hospital with a price tag of 98 Livres....
To place a comment please login Login »