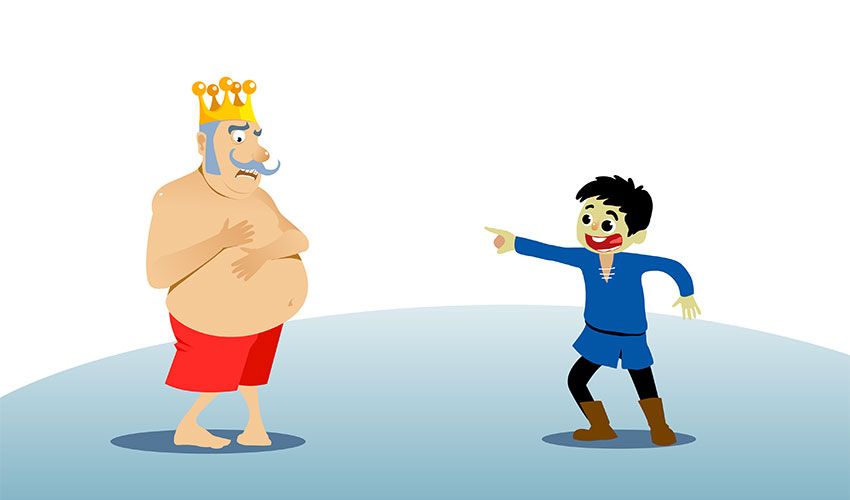 Many years ago, there was an Emperor of the Civil Service who was very fond of new coats, particularly those with furry hoods.

He did not pay much attention to his foot soldiers, his political masters or the Special Emperor Board that appointed him. In truth, he only left his castle to show off his fleecy-hooded outer-garments.

“Why won’t the Emperor meet the public?” his courtiers asked. “He’s too busy trying on coats in his wardrobe,” came the reply.

One day, some advisers arrived - there was a Chief of Staff, Chief Operating Officer, some Director-Generals, a few Sector Heads and lots of Group Directors, all hand-picked by the Emperor, most having worked with him when he ruled another kingdom.

They said they knew how to weave a parka of the most wonderful colours and patterns. However, the coat would be invisible to anyone who challenged the Emperor’s decisions or questioned his authority to rule.

“This would indeed be a most splendid parka,” said the Emperor. “I would be able to see who in my Kingdom does not believe in my judgment, or felt I could not perform my duties, even if I chose to rule another kingdom part time, for 50-odd thousand groats a year, which I’ll give to the needy beggars and poor worty hags.”

So, the Emperor employed his associates to make the parka. They set up an ‘organisational-restructure’ loom and a ‘communications’ loom, but, in reality, the looms did nothing at all.

After much talk throughout the Kingdom about the new magical parka, the Emperor wanted to assess progress so he sent his Chief Minister to check.

The Chief Minister went to the weaving and spinning advisers but could see no thread on their looms nor any bushy-hooded coat at all.

“I see nothing, which means I must be challenging the Emperor’s authority,” said the Chief Minister. “Oh dear, what can I do? I know: I will give my verbal agreement that I’ve seen the splendid parka but not make sure that anything is written down.”

So the Chief Minister returned to the Emperor and told him of the marvellous coat, and passed on the message from the advisers that they needed more gold and thread to continue the project.

Finally, the Emperor himself wanted to see the parka for himself so he descended from his tower with his ministers to see the advisers in action.

“Just look at the wonderful parka,” said the Chief Minister to the Emperor. “Isn’t it marvellous?”

“Isn’t it marvellous,” chimed in the advisers. “A wonderful garment. You’ll look amazing when you wear it,” they said. “You really can do no wrong!”

So, the Emperor got undressed and allowed the advisers to delicately dress him in his new parka. “Wow! Great! You’re the Best!” exclaimed his entourage.

The Emperor, wearing his new coat with its wispy white woollen - but invisible - hood, then walked through the streets of the capital. All the people cried out: “Oh, how beautiful is the parka, how radiant it looks.”

His Chief Minister, meanwhile, walked awkwardly alongside him in his full regalia of state, struggling not to fall on his sword.

Among the throng, no one would admit that the Emperor’s much admired jacket could not be seen because, in doing so, they would be saying they were either simpletons or unfit for their jobs.

But then a small boy, called Joe Public, pointed his finger and said: “But the Emperor isn’t wearing a parka; he’s got nothing on!”

People realised that little Joe Public was right. The advisers and ministers around the Emperor, by not questioning his judgment, had managed to convince the Emperor that he could never be wrong!

The Emperor then realised that the people had a point, but he carried on with his journey regardless, chest out, pants on.

Young Joe Public had the final say on this matter as the Emperor passed him, telling his friend: “The Emperor might not know how to weave a parka … but he certainly knows how to stitch a jersey!”