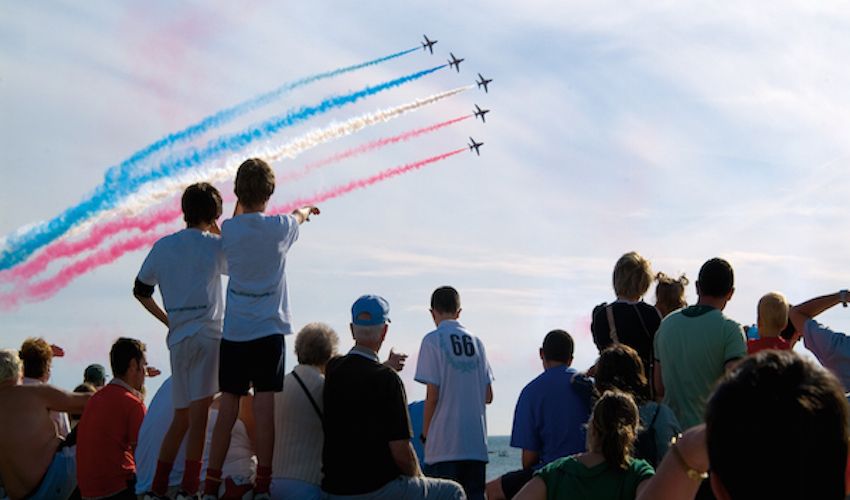 As part of an innovative environmental scheme, Jersey has decided to offset its carbon savings by holding an air display.

After pledging to reduce its carbon emissions to net zero by 2030, Jersey will balance this effort by backing the annual carbon-producing fest over St. Aubin’s Bay.

A Government spokesperson said: “On one hand, we want Islanders to insulate their homes, recycle more and drive electric cars; on the other, we want them to marvel at aircraft that produce more carbon per second than a coal-fired pencil factory.

“Add in red, white and blue smoke and jets flying in from across Europe, and we achieve a perfect equilibrium of what we save and what we generate.

“In fact, the air display is a great event to highlight the global climate crisis we face. Many warbirds - the Hurricane, Typhoon, Tornado and Lightning, for example - are named after weather phenomena that are predicted to become more severe and deadly with global warming.

“All we need is for Boeing to make the Drought, Deluge and Flood and we’d have the full set.”

The spokesman added that the Island’s sustainable agenda was clearly on show at the air display, with most of St Aubin’s beach painted bright green.

Challenged that this was, on the contrary, sea lettuce growth caused by the excessive use of fertiliser and rising sea temperatures, the spokesperson coughed, scratched inside his collar and then said he needed the toilet.

The spokesperson’s boss stepped in to add that the air display was a fine example of Britain’s military might, which has been so demonstrably effective in preventing the Taliban from returning to power in Afghanistan.

The opening of the crucial COP26 climate change conference in Glasgow next month is not expected to open with a flypast by the Red Arrows.

Warning: May be a weak attempt at satire.