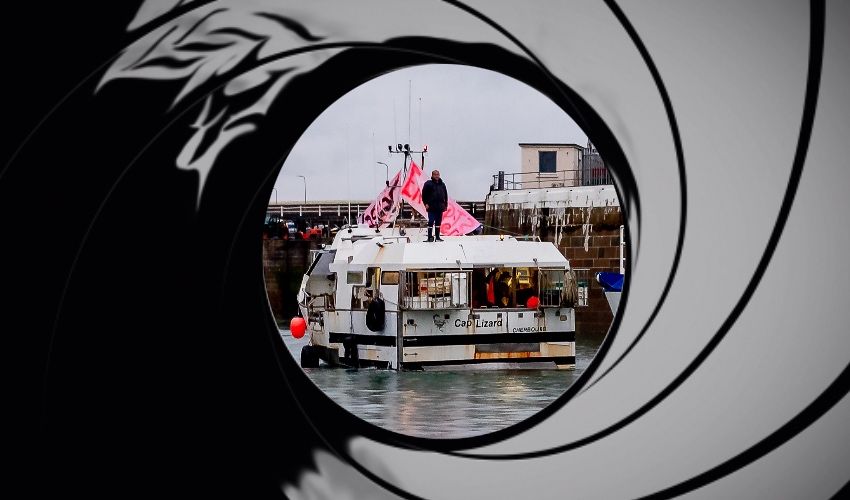 The script of the next Bond film after No Time To Die has been leaked to News Eye, with the super spy retiring to Jersey to take up fishing.

Critics - hours after the 25th edition’s delayed première - are already describing the next film’s plot as “an unrivalled masterpiece”.

After gaining a licence to fish around Jersey - thus meeting a criteria more demanding than the one to obtain 00 status - Bond sets about catching bass, lobster and bream, in permitted areas, with approved nets, and on sanctioned days.

However, providing the ’nature and extent’ of past activity was easier for Bond than most, as not only did his boat have a tracking beacon but also three assigned satellites, its own mini-sub, 12 drones and Q monitoring it from London.

Although only seeking the easy life for him and his fishing companion, Wehaveno Quarrel, Bond gets embroiled in an international plot when an evil despot, Emmanuel Macro Blofeld, tries to steal fishing licences from the Jersey authorities.

Blofeld, head of the nefarious and mysterious Société Pêcheurs Explorant Criminalité, Terrorisme, Représailles et Extorsion, and his diminutive henchwoman Annick Klebb, first try to send an army of sacrificial stooges in orange hard-hats and flared boilersuits to take the licences by force, in a fleet of underpowered fishing boats.

When they fail thanks to a stoic defence by local fishermen throwing explosive boomerangs - which thankfully don’t come back - Blofeld tries another tactic: sending Klebb to cut Jersey’s electricity cable using a giant knife hidden in her right rubber-lined shoe.

However, sending over a squadron of small vessels, led by Poisson Galore and her troupe of fisherwomen wearing skin-tight sou’westers, Bond and his heroic accomplices tackle Klebb on the beach.

In the struggle, and despite her thrusting foot, Klebb falls into a pool of hungry bluefin tuna and is corralled into submission by the angry tunny.

Bond then meets Blofeld in his underwater lair off Chaussey. The hero reclaims the stolen licences - which were grabbed from under the nose of Jersey’s Environment Minister while he was engrossed in his 1995 Private Eye annual - and forces the villain to flee back to his Elysée den, crying “sacre bleu” and other bleu words.

To confirm his victory, Bond then steals nuclear submarines from Blofeld’s partner in crime, Jean Stromberg, and delivers them to the Australians, piloted by the famous spy and his loyal lieutenant Kim Fortune, who unfortunately blows up halfway through the journey, as he always does.

No Time to Fish is due to be released in the summer of 2024.

WARNING: May be something fishy about this 'news'...