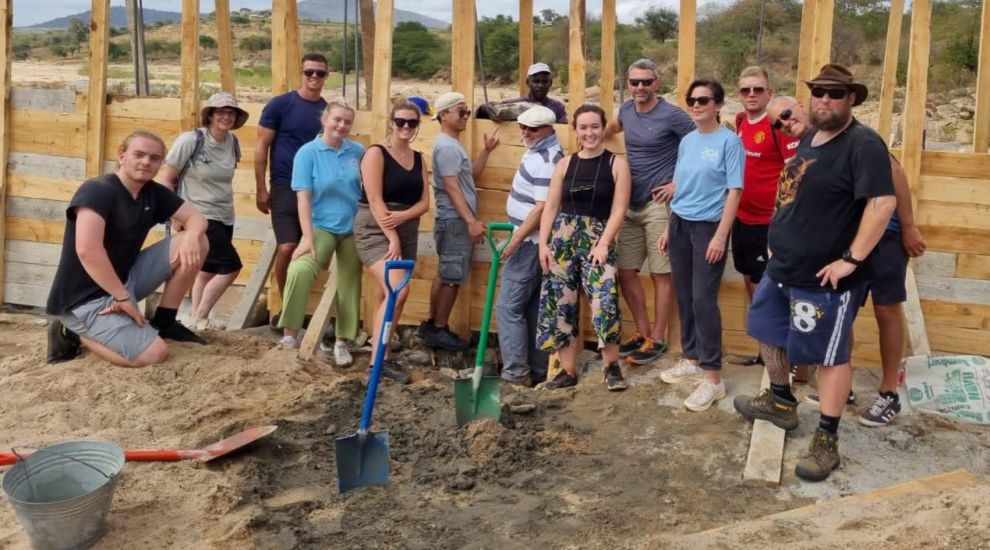 "Overcoming poverty is not a task of charity: it is an act of justice. Like slavery and apartheid, poverty is not natural. It is man-made and it can be eradicated and overcome by the actions of human beings."

With the words of Mandela, as quoted above on my conscience, I left Jersey on 18 June 2022 en route to Nairobi, Kenya, along with 11 other volunteers ably led by Paul Le Monnier, Jersey Overseas Aid Team Leader, and Ron Patron, JOA's Deputy Team Leader.

Traveling with us was also Rachel Carlotti, JOA Operations Officer, who coordinated the trip and worked alongside us in the field.

Despite excellent pre-trip briefings and printed guidance provided by both JOA and Sand Dams Worldwide (SDW), I think it is fair to say none of us could have predicted just how our experiences over the next 12 days would impact us both emotionally and physically.

Few of the team had even travelled to Kenya before, let alone learned how to build a dam, so we went with open minds albeit with a certain amount of trepidation.

It soon became clear, our eyes were to be opened in a profound way to the effects of this kind of poverty, the likes of which we have not seen in Jersey. The experience of poverty is, it seems to me, unchanging. The risks faced by poor people, the tragic waste of skills and abilities have been a constant over many centuries. Sadly, and all too often, what prevails is the disdain with which people in poverty are viewed. The debate about how to tackle poverty is not new and continues both locally, nationally and internationally.

There remains much division as to who should lead and indeed what the focus ought to be. It was for example, Joseph and Seebohm Rowntree that shocked a nation into recognising that something needed to be done to tackle poverty in the UK, and the founding of the Joseph Rowntree Foundation which works to inspire social change.

Whilst it is widely accepted that the best possible way out of poverty is work - for many, whilst they may try to be self-sufficient and do their best, this can be very difficult if the Nation in which they live are unable or unwilling to intervene.

Considering how we in Jersey respond of course may well continue to be a divisive debate, but the need to respond must surely be for better understanding, and a generous and proper response. There remains a strong and understandable argument about 'Place' and if charity should first begin at home?

Jersey has a very strong and well run network providing for those in need via for example, churches, community organisations, the parishes, and of course social security, often the first defence and protection against poverty. How we help those in other parts of the world is where Jersey Overseas Aid comes into its own.

Society will always be judged by its treatment of the poorest and those most in need. The newly elected States Assembly has much to challenge it in its first 100 days of government. I hope the new assembly continues to support JOA whilst of course dealing with competing demands locally.

We live facing the headwinds of a global and volatile economy not least due to the war in Ukraine. Those already suffering poverty are always on the frontline when the cost of living rises and we must act with a fair, sustained and co-ordinated response. Based on the evidence and my own experience in Kenya, it is as a direct result of taking part in this JOA project that has better informed my understanding of what twenty-first century poverty is, how it works and its impact on people and places.

To treat people in poverty as somehow different from ourselves, to demonize or stereotype them is not how to address the problem. We can only end poverty at home or abroad with a personal and collective commitment to take action.

It was probably the hardest two weeks of physical labour I have ever undertaken in my life - but my admiration for the Kaseveni community in Tawa, who are determined to end the hours and hours long daily commute from home in order to collect what we access, simply turning on one of the many taps we have in our homes, leaves me more convinced than ever that, poverty may indeed be always with us but it does not mean it is inevitable.

If we claim to belong to a caring community, then addressing the position of people in poverty wherever they may live, our response must come as much from our hearts as from our collective wealth.

Jersey sends £375k to combat drought in the Horn of Africa