Antetokounmpo efforts in vain as Jazz down Bucks 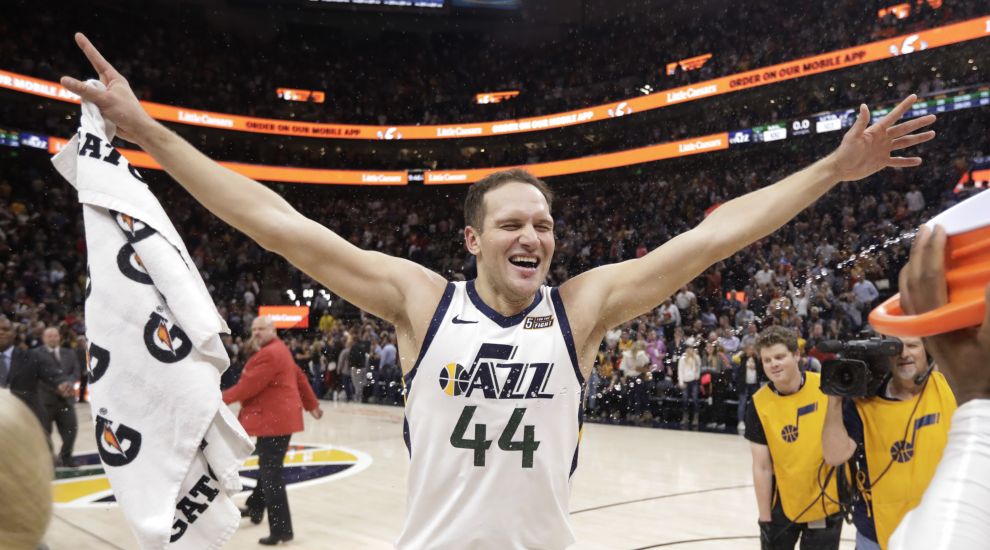 Antetokounmpo efforts in vain as Jazz down Bucks

Giannis Antetokounmpo had a huge second half but it was not enough to save the high-flying Milwaukee Bucks from defeat at the hands of the Utah Jazz in Salt Lake City.

Utah looked to be cruising after leading by 20 points at half-time but Milwaukee, led by Antetokounmpo, battled back and went ahead midway through the final quarter as they sought a seventh win in nine matches this season.

However, the Jazz responded and snatched a 103-100 victory courtesy of Bojan Bogdanovic’s three-pointer as time expired, ensuring his side stayed undefeated at home this season.

It also meant the Bucks stay winless on the road against the Jazz – the visitors have not won in Salt Lake City since 2001.

Bogdanovic finished with a game-high 33 points while Antetokounmpo poured in 30 points – 28 of which came in the second half – and grabbed 13 rebounds in a losing cause for the Bucks.

There were also a bittersweet nights for Damian Lillard and  D’Angelo Russell, who both finished on the losing side despite producing career-high performances for the Portland Trail Blazers and Golden State Warriors, respectively.

Lillard’s 60-point haul was also a franchise record – breaking his own mark – but it did not stop the Trail Blazers from going down 119-115 to the Brooklyn Nets.

Russell, meanwhile, poured in 52 points as the struggling Warriors were beaten 125-119 after overtime by the Minnesota Timberwolves, for whom Anthony Wiggins contributed 40 points.

Pascal Siakam also had an evening to remember with 44 points, 10 rebounds and four assists but his display came in victory as reigning NBA champions the Toronto Raptors beat the New Orleans Pelicans 122-104.

The in-form Los Angeles Lakers made it seven wins on the trot after earning a 95-80 triumph over the Miami Heat, leaving them top ahead of the Western Conference just ahead of the Denver Nuggets, who were 100-97 winners against the Philadelphia 76ers.

The Cleveland Cavaliers triumphed 113-100 over the Washington Wizards, the Orlando Magic claimed a convincing 118-86 victory at home to the Memphis Grizzlies, while Domantas Sabonis’ double-double of 17 points and 14 rebounds helped the Indiana Pacers defeat the Detroit Pistons 112-106.

Also, Marcus Morris Sr finished with 29 points and nine rebounds as the New York Knicks won 106-102 against the Dallas Mavericks, while the Atlanta Hawks were beaten 121-109 by the Sacramento Kings.