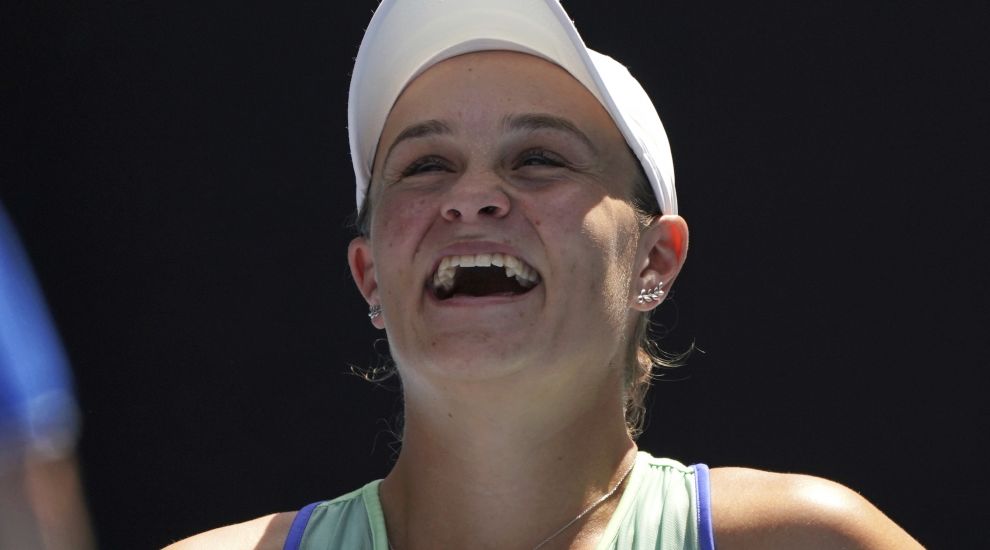 Ashleigh Barty is leaving the hype to the rest of Australia as she moves ever closer to a first title at Melbourne Park.

Barty gained revenge on Petra Kvitova in the quarter-finals, winning 7-6 (6) 6-2 to become the first Australian woman to make the last four in singles since Wendy Turnbull in 1984.

The ultimate aim is to become the first home winner of the women’s title since Chris O’Neil six years earlier and, if she can maintain the level she showed against Kvitova, she will take some stopping.

Barty’s face is inescapable around Melbourne but, an unassuming character, the 23-year-old said she would rather “be sitting at home just living my quiet little life”.

“I don’t pay attention to it, honestly,” Barty said of the increasing focus on her.

“I’m here to try and do the best that I can. Obviously it’s exciting. Hopefully I can bring a smile to a few faces around our country and around the world.

“For me, it’s trying to do the best that I can, find that enjoyment for myself and my team. I’m excited. My team’s excited. We love the opportunity of getting another match out on that beautiful court.”

It was at the quarter-final stage last year that her challenge foundered, Kvitova powering her way to a straight-sets win, but Barty has become a grand slam champion and the best player in the world since then.

A tight first set could have gone either way but it was Barty who came through it on a tie-break, saving one set point, and she was in complete control in the second.

Barty had beaten Kvitova in all three matches since their meeting last year, and she said of taking on the Czech: “I think it’s exciting. It’s a challenge. I love testing myself against Petra. She has this way of bringing out the very best in me.

“She came at me with all guns blazing. That first set could have gone either way. It was really important to try and get my nose ahead when I could. It was nice to save a set point and get a roll on early in the second set with a couple of quick breaks.”

Kvitova would have hoped to go one better after losing to Naomi Osaka in the final last year, but she admitted she was beaten by the better player.

“It’s disappointing to lose in the quarters,” she said. “I really had a tough opponent today. She was really proving to be number one. It was a great, great match, great fight.

“But overall it’s nice to be back in the quarters after last year’s final. Definitely I’m taking lots of positives.”

In the last four, Barty will take on 14th seed Sofia Kenin, who reached her first grand slam semi-final with a 6-4 6-4 victory over Ons Jabeur.

The most surprising of the last-eight clashes was also a contrast of styles between the steady, driven Kenin and Tunisian Jabeur, who possesses a magic box of tricks but does not always know how best to deploy them.

In the end, American Kenin came out on top, and this victory takes her to the verge of the top 10 with potentially more to come.

The 21-year-old, who beat Serena Williams at the French Open last year, said: “It feels really good. I’m super excited for it. I think overall I played really good. I tried to handle the nerves. I did a really good job handling myself.

“I feel like I’m playing really well. Of course, it’s really different being second week in a semi-final. Obviously I’m playing with more confidence. I really feel like I can do well.”

Kenin was born in Moscow but her family moved to the United States when she was a baby, and her tennis talents and competitive steel were evident from an early age.

“My parents moved to America so I could have the American dream,” she said. “They gave me an American dream. I’m proud of it and thankful for them.”

Although Jabeur was disappointed not to find her best form, this has been a breakthrough tournament for the Tunisian, who was the first Arab woman to get to this stage of a grand slam.

The 25-year-old, who will break into the top 50 for the first time, fully believes she can go all the way.

“Even if I didn’t go to the quarters, I was also looking to myself to win a grand slam even before,” she said. “But now I think I’m more close. I think I can believe more in my dream.”