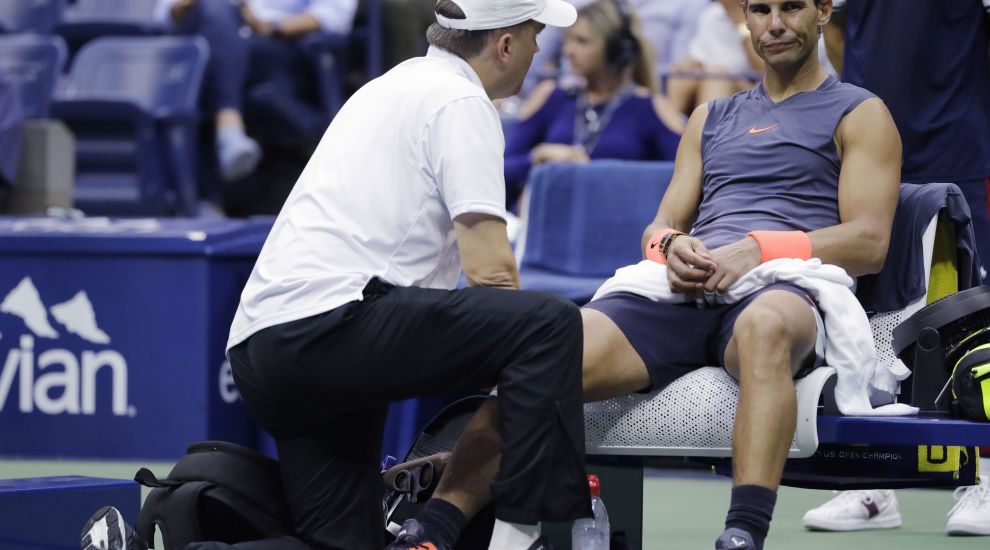 Nadal retired at the end of the second set after having his right knee taped.

Juan Martin del Potro and Novak Djokovic set up a US Open final clash as Rafael Nadal was left to curse the return of the knee problems that have dogged his career.

Looking to retain the title he won last year and cap another hugely successful season, Nadal must instead focus on rehabilitation after pulling the plug two sets into his semi-final against Del Potro.

The Spaniard had played down concerns over his right knee after having it taped during a long third-round match against Karen Khachanov and had survived a brutally physical encounter with Dominic Thiem in the last eight.

But, when he took a medical time-out early in the second set and returned hobbling to the court, it was clear something was seriously wrong, and, after going down 7-6 (7/3) 6-2, Nadal decided he could he longer continue.

A downbeat Nadal, who had spent nearly 16 hours on court in battling through to the last four, said: “I had some issues during the tournament. Then I think it was a little bit better.

“I think it was 2-2 in the first, 15-0, that I felt it. I said to my box immediately that I felt something on the knee. After that, I was just trying to see if in some moment the thing can improve during the match. But no, it was not the day.

“It was so difficult for me to keep playing, having too much pain. That was not a tennis match at the end. I hate to retire, but to stay one more set out there playing like this will be too much for me.”

Del Potro, a man far too familiar with his body letting him down, was sympathetic but also understandably delighted after ending a nine-year wait to reach a second slam final three years after he thought a wrist injury had ended his career.

The Argentinian said: “Of course it’s not the best way to win a match. I love to play against Rafa because he’s the biggest fighter in this sport and I don’t like to see him suffering on court like today so I’m sad for him but I’m also happy to move forward.

“It means a lot to me. I didn’t expect to get in another Grand Slam final. This is my favourite tournament, my biggest memories on a tennis court came on this court in 2009.”

Nadal is, of course, no stranger to knee pain having suffered recurring problems with tendinitis.

He said: “The pain on the knee is always very similar. The problem is this time it was something a little bit more aggressive because it was in one movement.

“I know what is going on with the knee. The good thing is I know how I have to work to be better as soon as possible because we have a lot of experience on that.”

It is the second time this year Nadal has been unable to finish a Grand Slam match having also retired during his Australian Open quarter-final against Marin Cilic after damaging a hip muscle.

The 32-year-old, who has only lost two other matches all season, said: “It’s not about losing. It’s about not having the chance to fight for it. It’s tough, these moments, but I’m going to keep going and keep working hard to keep having opportunities.”

The second semi-final was a tour de force from Djokovic, who matched the record of Ivan Lendl and Jimmy Connors by beating Kei Nishikori 6-3 6-4 6-2 to reach an eighth US Open final.

Djokovic made the most of the cooler weather with a superb display to stay on course for back-to-back Grand Slam titles.

This has been the Serbian’s most consistent slam – aside from last year, when he was sidelined by an elbow problem, he has not lost before the semi-finals since 2006 – but he has only won the title twice.

Djokovic said: “Seeing the consistency of the results I’ve had here, probably it has been my most successful Grand Slam. I know that I feel very comfortable here. I think I have two finals won and five losses. But hopefully I can get one better.”