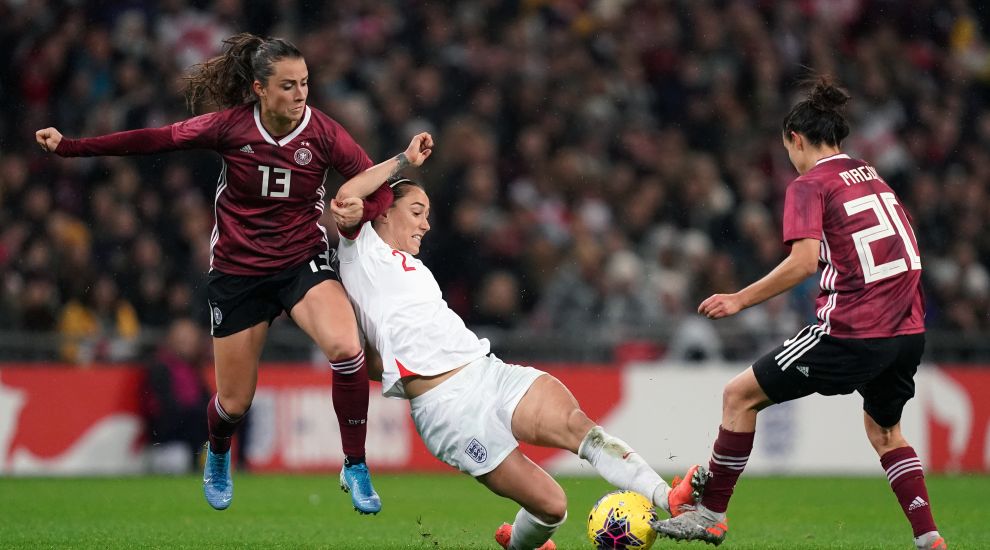 Germany Women spoiled the party and struck late on to earn a 2-1 victory over England in front of a record-breaking crowd at Wembley.

An attendance of 77,768 was recorded, which smashed the previous best for a Lionesses home fixture, but fell slightly short of the best ever crowd for a women’s match in the UK.

The target was the 80,023 spectators who turned up at Wembley for the Olympic final in 2012 between the United States and Japan.

When Alexandra Popp put the Germans ahead after three minutes, it looked like it could be a long night for Phil Neville’s team, but they bounced back.

Nikita Parris’ missed penalty was initially costly before Ellen White produced a trademark finish, although Klara Buhl’s late goal handed the visitors a 21st win over their rivals from 26 meetings.

A sea of England flags and a huge amount of noise greeted both teams onto the pitch at a wet and cold Wembley.

It did little to dampen the spirits of those in attendance, with many making the trip to the national stadium for the first time and creating a special and vibrant atmosphere.

The previous meeting between the teams under the arch in 2014 saw a frantic start with Jordan Nobbs hitting the crossbar after eight seconds and it was a case of deja vu this time.

Germany were on the front foot from the off and in the third minute silenced an excitable crowd when captain Popp opened the scoring.

A fine move down the right saw Kathrin Hendrich pick out the forward and she headed home to make it a nightmare start for Neville.

Opposition head coach Martina Voss-Tecklenburg would have been happy, with Germany dominating the opening 20 in the capital.

England’s newest supporters were limited to cheering brief attacks, but the decibel levels inside the ground went through the roof every time the hosts entered the opposition half.

While Germany’s head coach was all smiles, Neville was furious – especially in the 19th minute when Jill Scott had to make a crucial block from a corner.

Slowly but surely the Lionesses eased their way into the occasion, with Beth Mead a constant nuisance for the visitors, who were wearing red and black.

An injury to the Arsenal attacker, after a horror challenge by Sara Doorsoun, just before the half-hour mark almost halted England’s momentum, but she was fine to continue and in the 35th minute won a spot-kick.

White played Mead through and she just managed to beat Merle Frohms to the ball, which left referee Stephanie Frappart with no option but to point to the spot.

The yellow card shown to the Germany number one was roundly booed and then expected cheers turned to gasps when Parris had her penalty saved.

It was a poor spot-kick, right down the middle, but brilliantly stopped by the legs of Frohms and ensured the Lyon forward’s problems from 12 yards continued.

England were beginning to hit their straps and a minute before half-time levelled.

Keira Walsh produced a wonderful cross into the area and White made a classic run to beat the offside flag and poke home before Wembley witnessed the goggles celebration for the first time.

It was a timely boost for Neville and gave the Lionesses something to build on in the second period, but the offside flag saved them in 61st minute as Lina Magull tapped in after Mary Earps had denied Buhl.

A raft of substitutions were made by both teams not long after, with White leaving to a rousing reception and 19-year-old Lauren Hemp coming on for only her second cap.

The two sides were both pushing for a winner and unfortunately for England it was Germany who grabbed the decisive second a minute from time.

Captain Steph Houghton had made two key interventions moments earlier, but was unable to get across to block Buhl’s low shot which nestled into the bottom corner.

It was tough to take for the Lionesses and a disappointing end to a fantastic occasion, but that is now five defeats in seven games for Neville’s side.