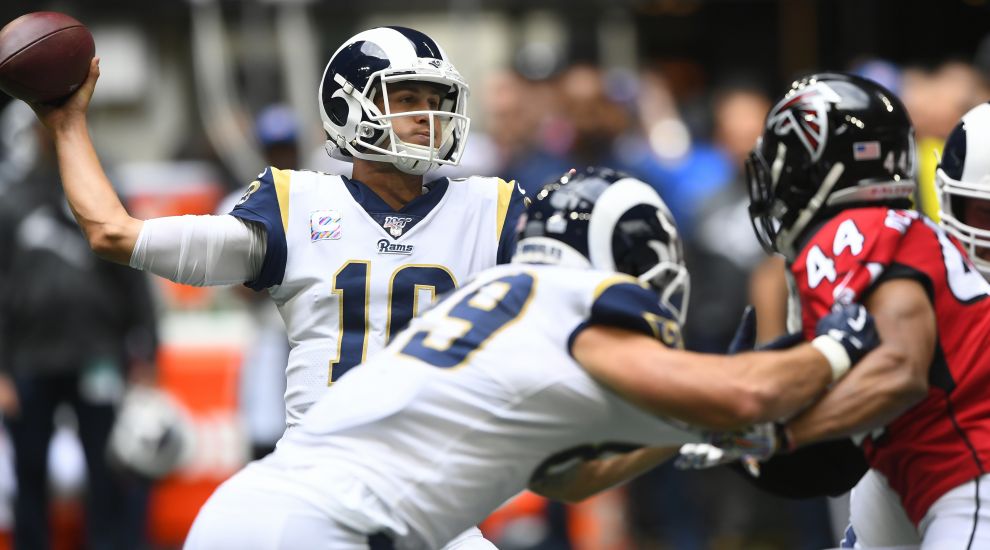 The Los Angeles Rams got back to winning ways in the NFL with a bad-tempered 37-10 success against the Atlanta Falcons.

Last season’s NFC champions and beaten Super Bowl side had lost three in a row going into Georgia but bounced back in style.

Jared Goff threw touchdown passes to Todd Gurley and Gerald Everett and ran in another score himself, while defensive back Darious Williams rounded off the scoring after a fumble by Falcons punt returner Kenjon Barner.

The Falcons had running back Devonta Freeman ejected for throwing a punch at Rams lineman Aaron Donald and lost quarterback Matt Ryan to an ankle injury after a sack by Donald. Replacement Matt Schaub hit Austin Hooper for their only touchdown.

Cordarrelle Patterson returned a kickoff 102 yards but the Chicago Bears were downed by the New Orleans Saints 36-25.

The Bears were down 9-0 when Will Lutz’s kick off was taken to the house by Patterson for his seventh career kickoff return TD, but three scores without reply gave the Saints what would prove to be an unassailable lead.

The Arizona Cardinals won 27-21 against the New York Giants, Chase Edmonds running for a career-best 126 yards and three touchdowns, while the San Francisco 49ers beat the Washington Redskins 9-0 on three Robbie Gould field goals at a rain-drenched FedEx Field.

The Green Bay Packers were just as clinical, beating the Oakland Raiders 42-24 as Aaron Rodgers threw five touchdowns and ran in another.

The Buffalo Bills moved to a 5-1 record with a 31-21 success against winless divisional rivals the Miami Dolphins.

Josh Allen threw touchdowns to John Brown and Cole Beasley and, after the Dolphins gave themselves hope, Micah Hyde crowned the win in unusual style by returning an onside kick for a touchdown.

The Tennessee Titans’ defence held strong to halt a late Los Angeles Chargers drive in a 23-20 win, while the Baltimore Ravens cemented their position on top of the AFC North after a 30-16 win over the Seattle Seahawks.

The Dallas Cowboys saw off the Philadelphia Eagles 37-10 to lead the NFC East, and the Indianapolis Colts moved top of the AFC South with a 30-23 win over the Houston Texans as Jacoby Brissett threw for 326 yards and four touchdowns, two of them to wide receiver Zach Pascal.

The Jacksonville Jaguars beat the winless Cincinnati Bengals 27-17, Yannick Ngakoue taking an ugly Andy Dalton pass back for a 23-yard interception score to seal the game.