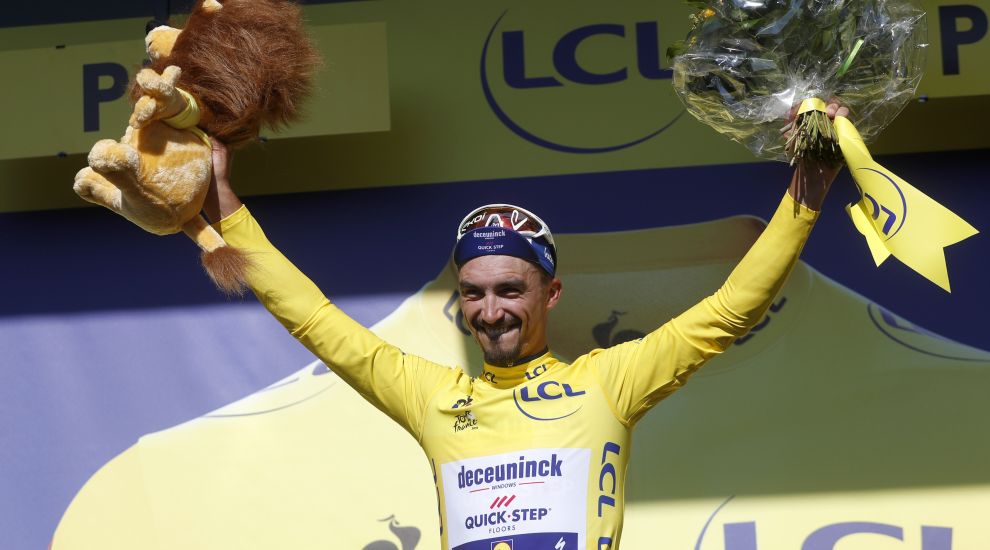 Julian Alaphilippe’s stunning victory in Friday’s Tour de France time trial led a surprised Geraint Thomas to suggest the Frenchman might now be the favourite to win the race.

Alaphilippe – resplendent in yellow on the 100th birthday of the maillot jaune – produced the time trial of his life to complete the lumpy 27km course in 35 minutes flat, 14 seconds faster than second-placed Thomas who now trails the Deceuninck-Quick Step man by 86 seconds overall.

There remains an expectation that Alaphilippe, who did not start the Tour targeting the general classification, will soon fall away, but after he survived Thursday’s first Pyrenean stage and then pulled out time on a world-class time trialist such as Thomas, the question is when.

“I didn’t really expect that,” Thomas said. “He’s obviously going incredibly well, so he’s certainly the favourite and the one to watch at the minute.”

Perhaps Thomas was still just surprised, perhaps he was already starting the mind games, or perhaps he truly believes it.

Ineos team principal Sir Dave Brailsford has been happy to dismiss Alaphilippe’s overall chances, but Thomas sounded like a man taking him seriously, even if he did add a telling caveat before Saturday’s summit finish on the Tourmalet.

“If he can keep that up then he’ll win,” Thomas said. “There’s a long way to go, there’s a lot of hard stages to come now.”

Alaphilippe appeared just as surprised as Thomas by the result, but played down his overall chances.

“I don’t think so,” he said when asked if he was a contender, pointing instead to his team-mate Enric Mas as Deceuninck-Quick Step’s overall contender after he moved to fourth and dislodged Egan Bernal from the lead in the young rider’s classification.

“Tomorrow’s summit finish is much different to what we’ve done up to now. I am just happy with my performance today and to keep the yellow jersey.”

In cycling, any rider producing outlying results will sooner or later be asked if everything is above board, and Alaphilippe, who has never won a stage race or finished inside the top 30 of a Grand Tour, got the question on Friday.

“I am not here to answer to suspicions,” he said. “I know the work I have done to be here. I am the most surprised at where I am now. If it creates suspicion, I know being first always makes people talk.

“If I was last on GC, I wouldn’t have this kind of question. I ride my bike the way I like, everything else makes me laugh.”

The time trial was contested under a baking sun, with temperatures hitting 30 degrees and Thomas among those to feel their affects.

Dan Martin said he too was surprised by the heat as he dropped out of the top 10, giving up two minutes and six seconds to Alaphilippe to slip to 11th, 20 seconds behind Adam Yates who also suffered on the day and dropped from seventh to 10th.

But Martin said he was not too disappointed.

“I did my maximum, I did the best I could and that’s the most important thing,” the Irishman said. “I don’t think I could have done better on any part of the course and that’s a good sign for the next few days.”

French hope Thibaut Pinot, caught out in the crosswinds on stage 10, performed well and moved himself up to seventh, albeit still three minutes 22 seconds off yellow.

British time trial champion Alex Dowsett had to settle for 21st place, 92 seconds down, as he admitted the course proved harder than he hoped.

“Gave it an honest go, quite a bit of elevation in today’s TT which is never welcome, but seems to be more commonplace nowadays, not a complaint nor an excuse, just need to continue trying to adapt to it,” he wrote on Instagram.

Jumbo-Visma’s Wout Van Aert had started the stage as one of the favourites for victory but his hopes – and his Tour – were ended in a nasty crash inside the final two kilometres.

The young Belgian clipped the inside of a fast right-hand bend and needed lengthy medical treatment at the roadside before being taken to hospital with what his team said was a deep flesh wound to his right leg.