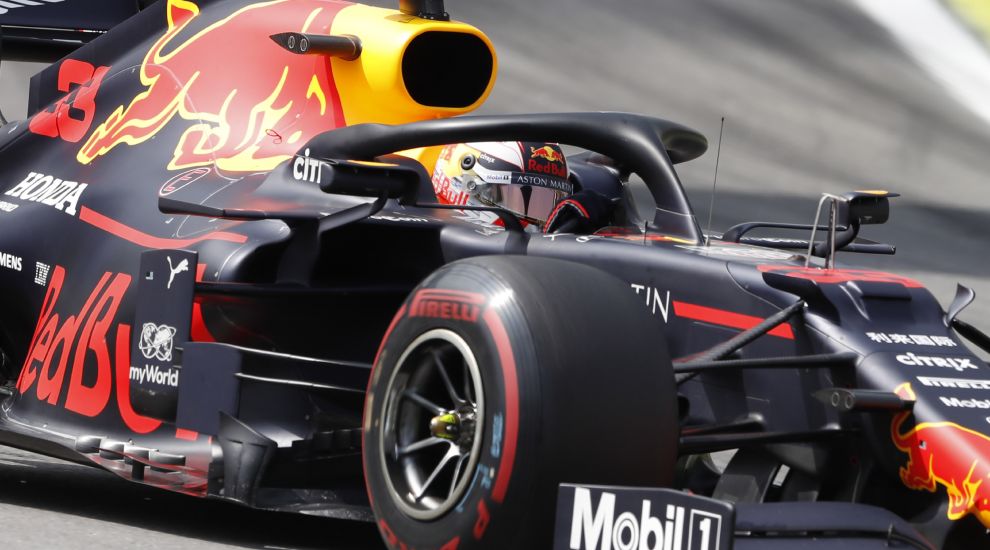 Hamilton, with damage to his car, took the flag in third, but his podium is subject to a post-race investigation.

Verstappen, out to seek revenge at Interlagos 12 months after he was punted out of the lead by backmarker Esteban Ocon, looked to have been denied another victory here after Robert Kubica almost collided with his Red Bull during the first round of pit stops.

Verstappen slammed on the brakes to avoid hitting the Williams and ending up in the wall, allowing Hamilton to get the jump on the Red Bull.

But in a spellbinding 75 seconds, Verstappen fought his way past Ferrari’s Leclerc and then latched on to the back of Hamilton’s Mercedes before diving underneath the world champion at the opening bend.

Verstappen’s skills were tested for a second time when the safety car was deployed after Valtteri Bottas’ Mercedes engine conked out.

Red Bull opted to pull Verstappen in from the lead to give their driver fresh rubber for the remaining 15 laps. Hamilton, running in second, was told by his Mercedes team to stay out if Verstappen stopped.

But the Englishman, on old tyres, was a sitting duck for the speedy Verstappen, who used Hamilton’s tow before sailing around the outside of the Mercedes at the first corner after the safety car pulled in.

The Ferrari drivers then sensationally collided as they diced for fourth place. Leclerc had just passed Vettel at the Senna Esses, but on the run down to the left-handed fourth corner, the German appeared to cut across his team-mate. Both sustained terminal damage, before pointing the finger at one another in a series of furious radio outbursts.

That led to a third safety car period. Hamilton took on fresh tyres, dropping him to fourth. He immediately drove past Gasly at the restart but then collided with Albon in the battle for second, denying the London-born Thai his first podium. He would finish out of the points in 14th.

“I massively apologise to Albon,” Hamilton said. “The gap was there but it closed at the end. It was definitely my fault.

“I raced my heart out and left nothing on the table. I took a lot of risks today.”

McLaren’s Carlos Sainz finished fourth, but could be promoted if Hamilton is penalised.

A quarter of a century after he perished at the San Marino Grand Prix, Ayrton Senna’s memory lives on. The Brazilian’s name was chanted from the packed-out grandstands as his nephew, Bruno, a one-time Williams driver, drove his uncle’s world championship winning McLaren from 1988 in the hour before Sunday’s race.

In the absence of a Brazilian driver, and his idolising of Senna, Hamilton has become something of a home favourite in these parts.

As he arrived on the grid, the Briton’s name rang out around the stands of Interlagos. With his sixth world championship already in the bag, it might have provided the 34-year-old with the necessary motivation to chase a fourth victory at the home of his childhood hero.

Hamilton, starting from third on the grid, wasted no time in fighting his way past Vettel. The Mercedes driver roared away from his marks, drawing alongside the German’s Ferrari on the downhill roll to the Senna Esses. Hamilton stamped later on his brakes, and, elbows out, got the job done by dancing his way around the outside of Vettel’s Prancing Horse.

Hamilton’s early move ensured a shootout between the two stars of the sport. While Vettel might be a four-time world champion, and Leclerc emerging as a driver for the future, Hamilton and Verstappen are in a different tier. Verstappen has not been particularly generous in Hamilton’s march to a sixth title – his argument being that it has been more machine than man.

There are those in the paddock, too, who believe that Verstappen would beat Hamilton if he was in a Mercedes. If Bernie Ecclestone, here in Brazil for only his third race of the year, was still running the sport, he might have pulled the strings to make it happen. On this occasion, however, Verstappen had the speed in his Red Bull to more than match Hamilton.

As Verstappen celebrated his second win of the campaign, another inquiry will be under way at Ferrari following a major collision involving its two drivers, the four-time world champion and the emerging star. Vettel suffered a left-rear puncture, while the force of the impact broke Leclerc’s front suspension.

Their incident promoted the Alfa Romeo duo of Kimi Raikkonen and Antonio Giovinazzi to fifth and sixth ahead of Renault’s Daniel Ricciardo with British teenager Lando Norris eighth.