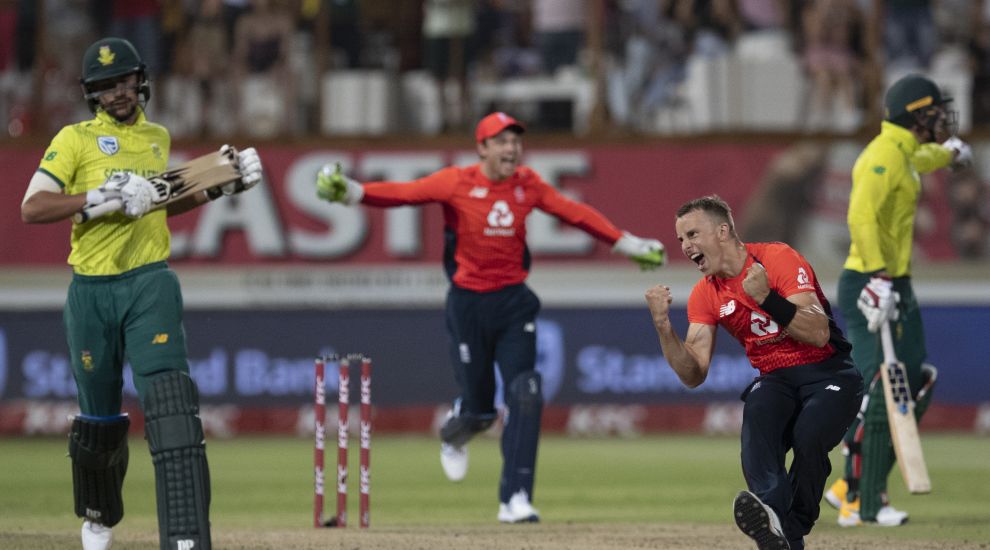 Eoin Morgan hailed the resolve of Tom Curran after the seamer held his nerve to help England draw level in their Twenty20 series against South Africa with a two-run win at Durban.

Curran was able to defend 15 off the last over and three from the final two balls, pinning Dwaine Pretorius lbw before a back-of-the-hand slower delivery saw new man Bjorn Fortuin ramp to Adil Rashid at short fine leg.

The tourists therefore defended 204 for seven in another last-ball thriller – two days after South Africa had prevailed by one run – to set up a decider in this three-match series at Centurion on Sunday.

That would not have happened without Curran, who may not have even been in the line-up had Jofra Archer been available, and the performance means England seem to be well-stocked with fast bowlers ahead of this year’s T20 World Cup.

England captain Morgan said: “Probably with two balls to go, it was South Africa’s game to lose, they were in an unbelievably commanding position.

“The ball that had been reverse swinging had been hit out of the ground and we were back with a normal ball so it was really tough work.

“I thought Tom Curran did an unbelievable job to get the wicket (of Pretorius).

“The more options we have for guys bowling at the death…variation in the big overs is completely invaluable.

“We’ve got guys getting injured all the time, particularly fast bowlers, so I don’t think you can have enough guys in your squad of players to deliver that sort of skill. That creates good, healthy competition.”

The wicket of Pretorius was laced with controversy after the batsman signalled for a review, only after he was seemingly instructed to by South Africa captain Quinton De Kock from their dressing room.

It is against the rules to seek off-field advice for a referral but the umpires allowed the decision to go upstairs, which would have left a sour taste had the original judgement been reversed.

Morgan merely said afterwards: “If you look at the TV footage, there’s clear movement from the South African changing room. Just have a look at it.”

England were indebted to Moeen Ali’s incredible 39, in which seven of the 11 balls he faced were dispatched to the boundary in a high-scoring game.

Morgan said: “Moeen Ali’s runs at the end were extremely valuable. He’s obviously extremely easy on the eye, very elegant, and relies on his timing a lot. We saw a full swing of the bat which was great.

“We know when he hits form he does run on with it because he is a very confidence-built player which is great, his confidence is high at the moment.”

However, Moeen and then every frontline England bowler came in for heavy punishment from De Kock, whose 17-ball fifty was the fastest by a South African in T20 internationals.

He eventually holed out to deep midwicket off Mark Wood for 65 from 22 deliveries, which contained two fours and eight sixes, in an innings that gave his side a great opportunity to secure a series win.

Morgan added: “When he plays like that he’s obviously in fantastic form, but he’s taking big risks because he’s in great form.

“When you take big risks, it brings the opposition in because, if you can get a bowler to trust bowling his best ball or bowling to the plan that we’ve committed to bowling, you’re going to get a chance along the line.

“The other side of that is you might lose the game quite quickly. I thought he played extremely well so full credit to him but nice to get a chance when we did.”

He said: “I’m disappointed we didn’t cross the line, it would have been nice. But it’s just the way things go.”