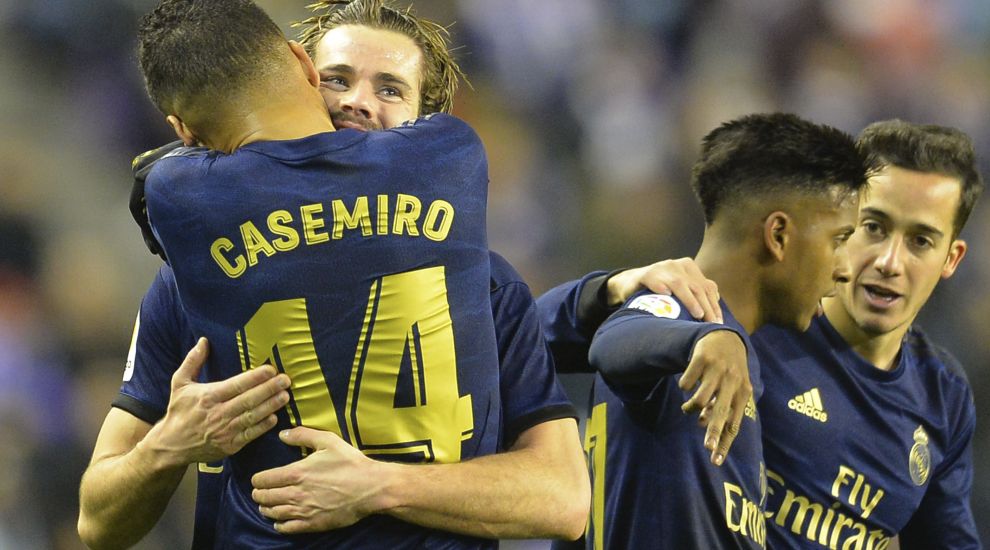 A rare goal from Nacho gave Real Madrid a 1-0 win over Real Valladolid and a three-point lead at the top of LaLiga.

The Spain defender had gone over two years without scoring for Real, his last goal coming in a 7-1 demolition of Deportivo La Coruna in January 2018.

But Nacho broke Valladolid’s defensive resistance at the Estadio Jose Zorrilla 12 minutes from time, heading Toni Kroos’ cross into the corner of the net.

Real now hold a three-point advantage over Barcelona, who were beaten at Valencia on Saturday.

Atletico Madrid lost further ground on Real – Diego Simeone’s side are now 10 points behind their city rivals – after being held 0-0 at home by lowly Leganes.

Celta Vigo and Eibar also played out a goalless draw, while Angel’s last-minute penalty gave Getafe a 1-0 win over Real Betis and moved them into fourth.

Serie A leaders Juventus slipped up at Napoli, losing 2-1 to suffer only their second league defeat of the season.

Piotr Zielinski and Lorenzo Insigne put Napoli in control before Cristiano Ronaldo’s 20th goal of the season provided Juventus with a last-gasp consolation.

Ashley Young had an assist on his Inter Milan debut, but Antonio Conte’s side were held 1-1 at home by Cagliari and trail Juventus by three points.

But Radja Nainggolan, on loan from Inter, equalised against his parent club with a deflected strike 12 minutes from time.

Argentina striker Martinez was sent off in injury time for two quickfire bookings.

The Rome derby honours were shared as Lazio drew 1-1 at Roma.

Both goals came in the first half with Lazio’s Francesco Acerbi cancelling out Edin Dezeko’s ninth league goal of the season.

Parma moved level on points with sixth-placed Cagliari as Riccardo Gagliolo and Dejan Kulusevski scored in a 2-0 win over Udinese, while Sampdoria and Sassuolo fought out a goalless draw.

Hellas Verona beat 10-man Lecce 3-0 with Pawel Dawidowicz, Matteo Pessina and Giampaolo Pazzini on target. Leece had Cristian Dell’Orco sent off midway through the second half when 2-0 down.

Bayer Leverkusen sent Fortuna Dusseldorf to the bottom of the Bundesliga with a 3-0 win.

Hoffenheim moved up to seventh with a 3-0 success at Werder Bremen, Christoph Baumgartner and Sargis Adamyan adding to a Davy Klaassen own goal.

In Ligue 1, leaders Paris St Germain extended their advantage over Marseille to 10 points with a 2-0 win at Lille.

Neymar scored in each half, the second from the penalty spot, to take his total for the season to 15.

There were emotional scenes at Nantes as the club marked the first anniversary of Emiliano Sala’s death.

Nantes lost 1-0 at home to Bordeaux – another of Sala’s former clubs – with Jimmy Briand grabbing the late winner after Andrei Girotto had been sent off for the hosts.

Lyon inflicted a 12th straight defeat on Toulouse in all competitions as Maxwel Cornet, Moussa Dembele and Karl Toko Ekambi scored in a 3-0 win.

Martin Terrier left the field on a stretcher in the first half, which Lyon later described as a “fainting incident”.

Lyon added that the midfielder had regained consciousness and was “feeling better”.