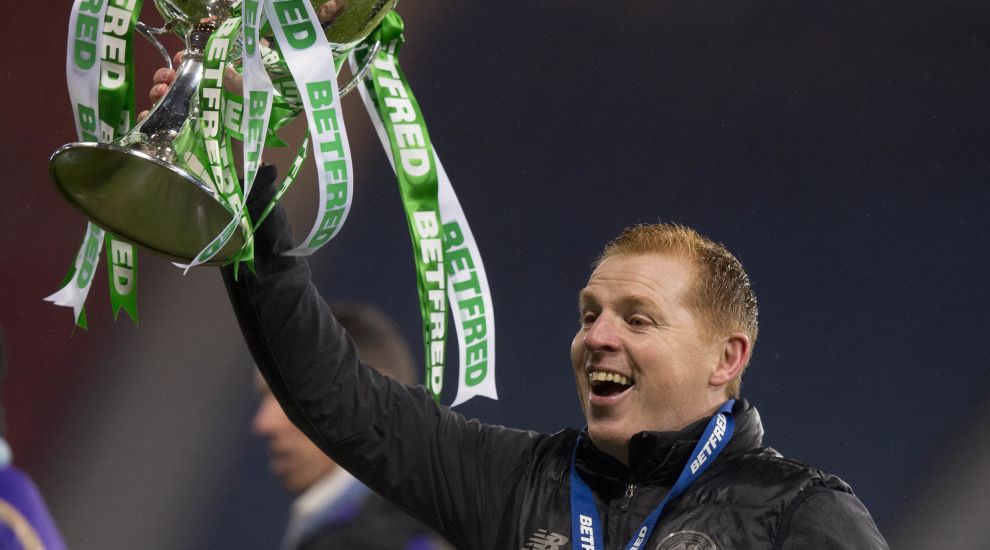 Rangers were out to end the Hoops’ reign of domestic dominance but Steven Gerrard’s team had their hearts broken by Forster at Hampden.

The Englishman made a string of crucial saves as Lennon’s team found themselves trudging through puddles during a rain-lashed first half.

The on-loan Southampton goalkeeper then pulled off a match-winning penalty save from Alfredo Morelos after Christopher Jullien had stroked the triple treble winners ahead in the 59th minute.

Celtic also found themselves down to 10 men as they conceded that spot-kick, with teenager Jeremie Frimpong dismissed for pulling back Morelos.

But Celtic once again found a way to win, leaving their manager purring.

The Northern Irishman – who follows Billy McNeill to become only the second man to have won all three Scottish prizes as both a player and a manager – said: “I’m really proud. We had to dig in today. We didn’t play well in the first-half. We had to rely on Fraser at times to make some world-class saves.

“There are many ways to win a game of football. Over the past eight to 10 weeks, we have been playing scintillating, brilliant, breathtaking football. Today we had to roll up our sleeves and dig in.

“I’ve not seen a goalkeeping performance or goalkeeper like Fraser for a long time. In his first spell here, he did some incredible things and now he’s doing it again in his second.

“We’re grateful to have him. He’s buzzing and thrilled to be here. We needed him today. He stood up and made saves that other goalkeepers can’t make.

“It means the world to me (to match Billy’s clean sweep as a player and a manager). The League Cup has been something of a monkey on my back. It owed me one. It’s just nice to tick that box as a manager.

“I don’t know what you would compare (10 trophies in a row) with but it’s incredible. It’s easy to give it up, to think ‘oh it’s not our day today and that’s the end of it’ but they just won’t. It’s amazing. They are an incredible group of players.”

Celtic had an injury concern before kick-off, with Celtic talisman Odsonne Edouard only fit enough for a seat on the bench.

But Edouard made a huge contribution within seconds of making his entrance as he won the free-kick which led to Jullien’s goal.

“It is hugely difficult to make the decision to leave him on the bench with the quality of player that he is,” said Lennon. “But you don’t want to start him with him not feeling right.

“When Odsonne came on you saw the whole team perk up, the spark. His first action is to win the free-kick for the goal. At times he sprinkled that little bit of stardust that we had been missing for the first hour.

“This win is massive. Absolutely massive. It’s a huge psychological lift. It’s a massive shot in the arm for them in the circumstances.”