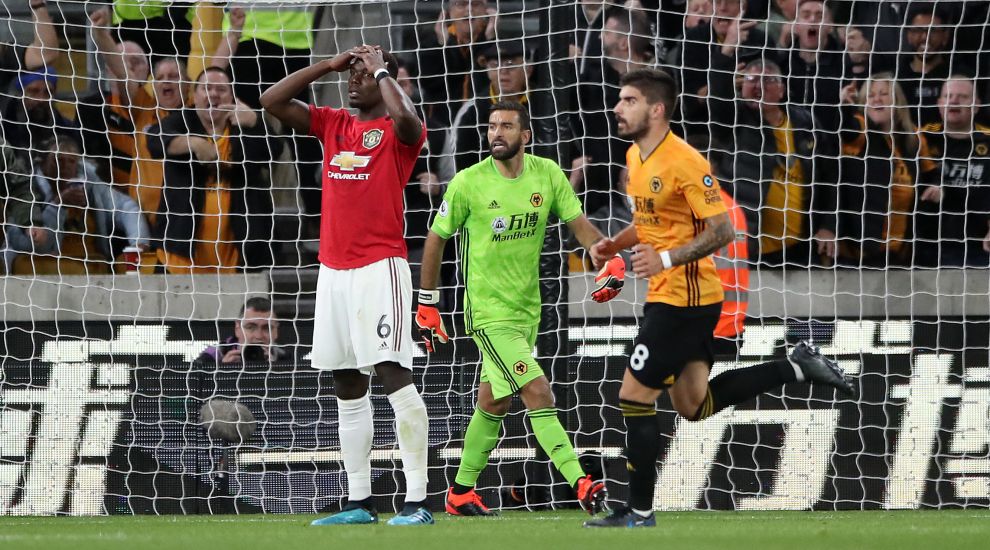 Midfielder Pogba had his spot-kick saved by Rui Patricio – his fourth penalty miss in a year – as United drew 1-1 at Molineux.

It came after Neves curled in a brilliant second-half leveller to cancel out Anthony Martial’s 50th United goal.

Ole Gunnar Solskjaer’s side missed the chance to top the early Premier League table despite a dominant first-half display.

Wolves’ second-half rally earned them a point and they now travel to Torino for the first leg of their Europa League play-off on Thursday.

It was a lively yet uneventful opening until Martial should have opened the scoring after 18 minutes.

Marcus Rashford bamboozled Matt Doherty and Ryan Bennett on the left and delivered a delicious cross for Martial – only for the forward to fail to connect from four yards.

Solskjaer had called on his strikers to be more clinical and Martial clearly learned from his mistake nine minutes later when he fired United ahead.

Patient build-up from Luke Shaw, Scott McTominay and Jesse Lingard erupted when Rashford slipped Martial into the area and the forward blasted in from eight yards.

The visitors had already settled early but the goal allowed them to discover their rhythm.

Pogba lurked with intent in the United midfield as he looked to dictate the play while Rashford was a constant threat.

Wolves had rarely been so shackled at Molineux and the composed visitors almost added a second in first-half added time.

Bennett’s loose pass allowed Martial to race towards the area but Willy Boly’s last-ditch challenge just managed to nudge the ball away before the danger became imminent.

The only blot for United was Daniel James – making his full debut – being booked for diving midway through the half.

Wolves emerged for the second period with renewed vigour as Adama Traore replace the injured Doherty.

But Lingard wasted a fine early chance when he missed his kick from Aaron Wan-Bissaka’s pass.

Traore’s pace had unsettled United and he almost helped conjure a leveller after 52 minutes.

Harry Maguire brought Traore down and from Joao Moutinho’s free-kick Jimenez’s header hit the inside of the post, came off David De Gea and bounced away.

Yet the hosts did not have to wait long for a special equaliser on 55 minutes.

A short corner from Moutinho and Diogo Jota was worked to Neves on the edge of the area and he curled an excellent strike into the top corner off the bar.

After a VAR check on the goal Wolves had their tails up but United were given a golden chance to win midway through the second half.

Martial fed Pogba, who skipped into the area – only to be felled by Conor Coady.  A penalty was awarded and Pogba went for power but Patricio dived to his right to beat away his thumping effort.

The save failed to galvanise Wolves though as the game entered a lull and United probed, with little reward.

Jonny came closest to a winner in the closing stages but the Wolves man headed straight at De Gea.