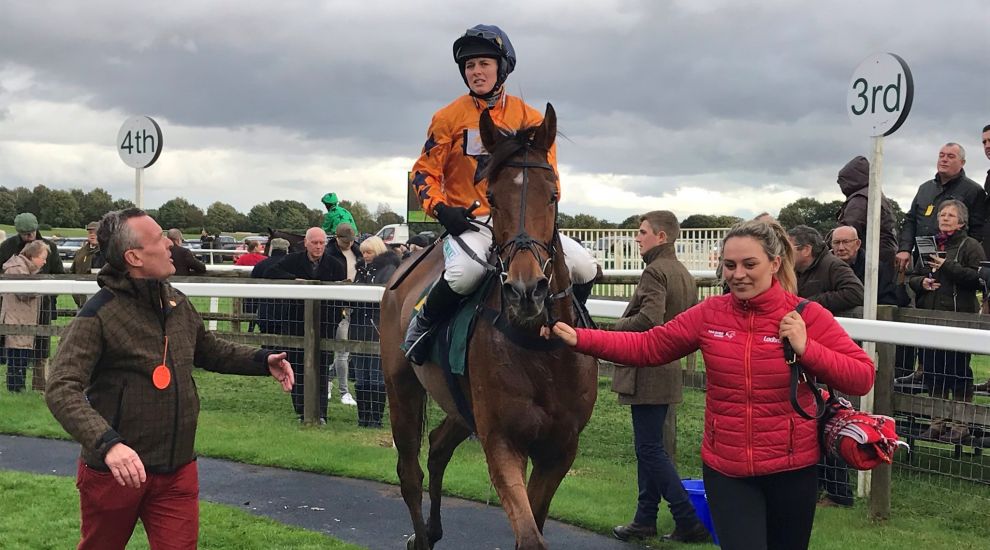 Redzor relished his new job of jumping fences with an easy victory in the Sky Sports Racing Sky 415 Novices’ Chase at Fakenham.

Trained by Dan Skelton, the six-year-old – who won just one out of six over hurdles – had the race in safe keeping with some accurate leaps down the back straight.

Turning for home, Bridget Andrews just had to ensure she negotiated the last – which she did safely on the 6-1 shot.

Part-owner Bryan Drew said of the 21-length winner:  “He jumped a little bit big over hurdles, and we thought he was a little bit one-paced over shorter trips.

“It really looked like three miles over a fence would suit him. He jumped immaculately at home, but you never know what they will bring to the course.

“He is an efficient jumper that doesn’t waste time in the air. That was 10 out of 10. You don’t have many days like that as an owner – that was fantastic.

“Let’s hope he comes out of the race well, and then we will look for another reasonable target.”

Sir Alex Ferguson was among the winning owners too, as Red Force One (13-8) took the Sky Sports Racing Supports EAAA Novices’ Hurdle.

Paul Nicholls’ youngster survived a blunder at the last to score by three and a quarter lengths.

Assistant trainer Harry Derham said: “He was a bit too keen today, and (jockey) Harry (Cobden) thinks he will be better in a handicap when they go faster – because that will allow him to settle.

“This type of track suited him, because he has got that bit of speed from the Flat. I’d like to think he would win a few more over hurdles now.”

Nicholls and Cobden then doubled up as Touch Kick (11-4 favourite) ran out an easy winner of the Breeders’ Cup On Sky Sports Racing Handicap Chase.

Derham said: “I’m very fond of this horse. He is very straightforward, genuine and honest. He has his level and always runs to it.

“Paul really fancied him today. To be honest, the whole race I didn’t have any doubt, because he got in such a good rhythm. He is a thoroughly likeable horse – and while he won’t be a champion, he will win lots of races at his level.”

Landy said: “He was well handicapped. My girlfriend Courtney Tinkler rides him all the time, as she did when he was with Stef (Keniry).

“She has a great partnership with him and she is key to him. She is on him every day and knows when to do a bit more and when not to.

“He does travel really well and he doesn’t run keen. He is an absolute diamond, this horse.”