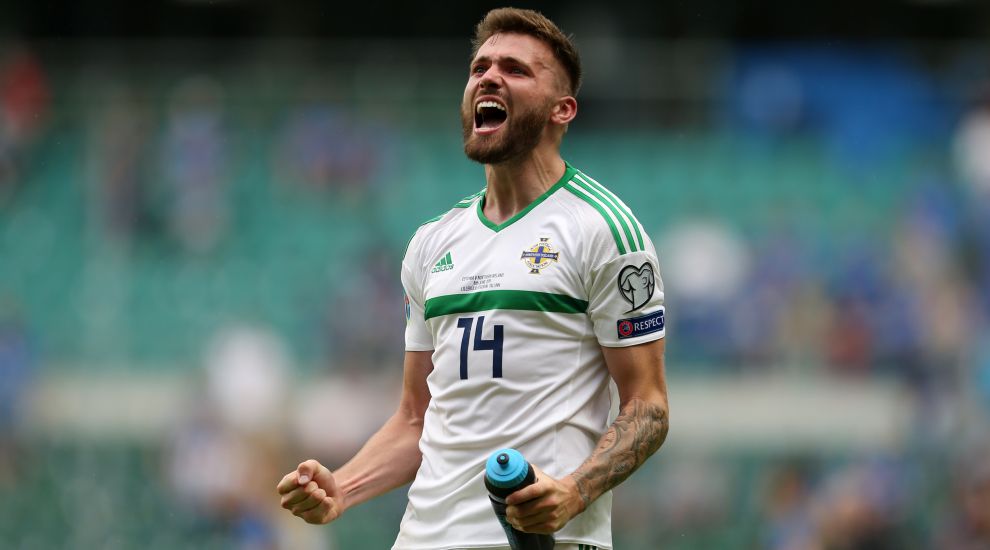 Stuart Dallas believes a never-say-die attitude can carry Northern Ireland to Euro 2020 after they produced another late show to beat Belarus on Tuesday night.

Paddy McNair’s 85th-minute goal in Borisov made it four wins out of four for Northern Ireland in Group C, and they now have the platform they need to try to upset either Germany or Holland in the battle for one of the top two spots.

Five of the seven goals Northern Ireland have scored in this campaign have arrived in the 75th minute or later, and all have proved vital with only one of their wins coming by more than a single goal.

“It’s unbelievable,” Dallas said. “It speaks volumes about the team and how far we’ve come and our never-say-die attitude.”

Tuesday’s 1-0 success came on the back of a 2-1 win over Estonia in Tallinn on Saturday, Northern Ireland’s first maximum haul from an away double-header since boss Michael O’Neill was a player back in 1993.

“We’ve come out here to get six points in these two games and we’ve done that,” Dallas added.

“Especially at this stage of the season it is difficult with us being out of season.

“The shape we’ve kept ourselves in, the fitness levels and the preparation Michael and the staff have put in in Manchester at two training camps, another in Austria and then the two games, it’s been a long couple of weeks. But it’s all worthwhile.”

With home and away games against Germany and Holland still to come, Northern Ireland have plenty of hard work still ahead if they are to qualify for a second consecutive European Championship, but they have given themselves the best possible chance.

“People maybe thought we’d just settle with (Euro 2016) but it says a lot about this group of players that we don’t want to just sit and talk about that forever,” Dallas said.

“We want to go again. We narrowly missed out on the World Cup and we’ve given ourselves a tremendous chance now to go and achieve something special but we won’t get carried away.

“Four wins out of four is brilliant but we’ll enjoy it, regroup and go again in September.”

As the players celebrated in the Borisov Arena changing rooms, veteran defender Aaron Hughes bid an emotional farewell to the game, hanging up his boots at the age of 39.

And Dallas joked it was no coincidence that he did so after watching McNair’s first international goal.

“I’m delighted for Paddy,” the versatile Leeds player said. “Hughesy said after he wasn’t retiring until Paddy scored, so he can go out on a high now!”