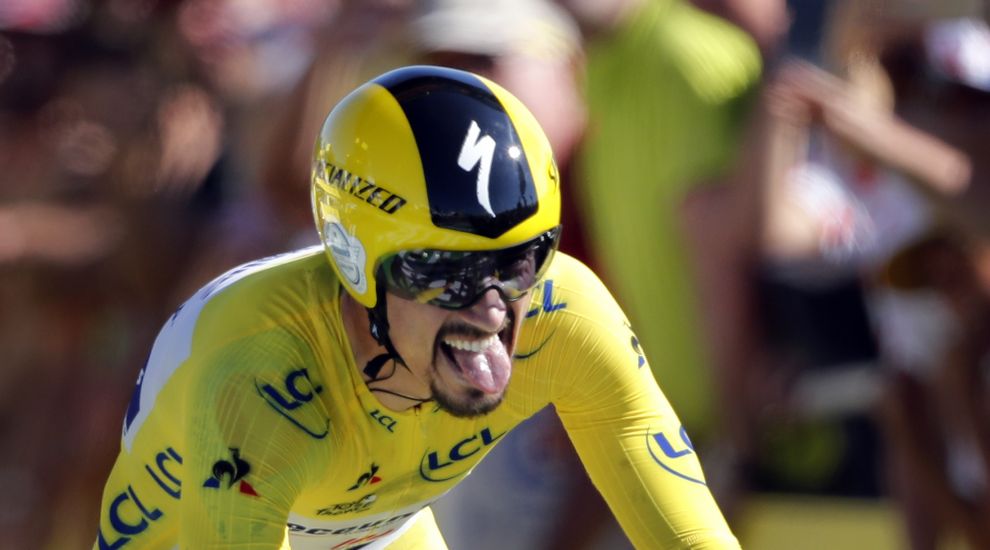 A stunned Geraint Thomas called Julian Alaphilippe the favourite to win the Tour de France after the Frenchman’s shock time trial victory in Pau saw him extend his lead in yellow.

Alaphilippe produced the time trial of his life to complete the lumpy 27km course in 35 minutes flat, 14 seconds faster than second-placed Thomas who now trails the Deceuninck-Quick Step man by 86 seconds overall.

There remains an expectation that Alaphilippe, who did not start the Tour targeting the general classification, will soon fall away, but after he survived Thursday’s first Pyrenean stage and then pulled out time on a world-class time triallist such as Thomas, the question is when.

“I didn’t really expect that,” Thomas said. “He’s obviously going incredibly well, so he’s certainly the favourite and the one to watch at the minute.”

Ineos team principal Sir Dave Brailsford has been happy to dismiss Alaphilippe’s overall chances, but Thomas is beginning to take him seriously.

Asked if he was a threat, Thomas said: “For sure, the way he’s riding. If he can keep that up then he’ll win.

“There’s a long way to go, there’s a lot of hard stages to come now.”

Alaphilippe sounded just as surprised as Thomas by the result.

“It’s incredible,” he said. I’m really happy. Without being pretentious, I knew I could do a good performance on such a course, I told my cousin Franck this morning that I’d do something good but I didn’t think I could win the stage, especially with such a big gap against Geraint Thomas.

“The first part suited me but I surprised myself in the second part of the race. I pushed my limits.

“With the help of the public, I gave everything til the line. I heard that even in my team car they all cried.”

Thomas’ failure to pick up time was not the only disappointment for Team Ineos as Egan Bernal could only manage 22nd on the stage, 96 seconds down on Alaphilippe, and so slipped from third to fifth on the general classification.

Less of a surprise was seeing the time trial cause a shake up at the top of the standings, with Mitchelton-Scott’s Adam Yates and UAE Team Emirates’ Dan Martin among the losers.

Martin finished 33rd on the day, two minutes six seconds down on Alaphilippe, with Yates one place and two seconds further back.

That sees Yates drop from seventh to 10th, three minutes and 55 seconds down, with Martin in 11th a further 20 seconds back.

French hope Thibaut Pinot – caught out in the crosswinds on stage 10 – performed well and moved himself up to seventh, albeit still three minutes 22 seconds off yellow.

Jumbo-Visma’s Wout Van Aert had started the stage as one of the favourites for victory but his hopes – and his Tour – were ended in a nasty crash inside the final two kilometres.

The young Belgian clipped the inside of a fast right-hand bend and needed lengthy medical treatment at the roadside before being taken to hospital with what his team said was a flesh wound to his right leg.