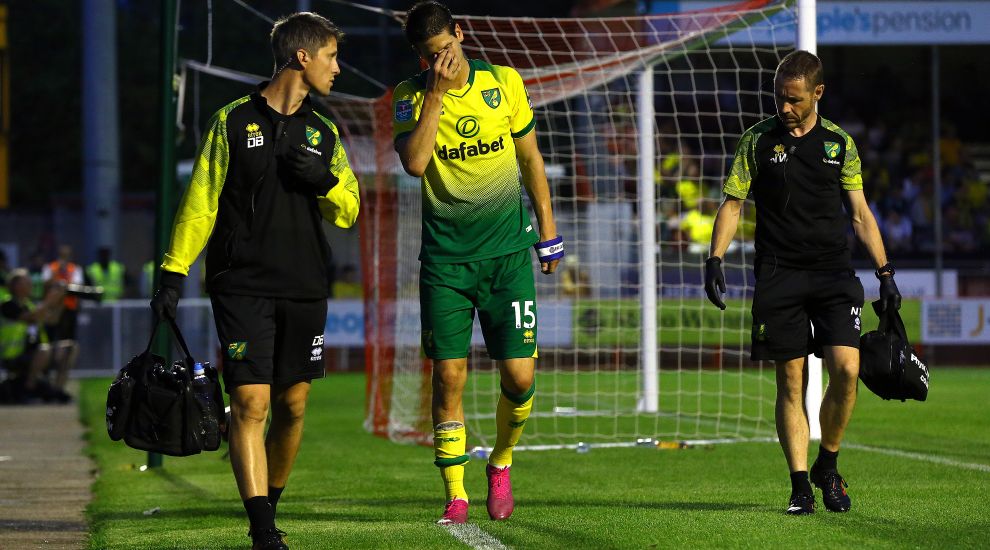 Norwich defender Timm Klose has recalled how his battles with mental health saw him turn to alcohol when just 13 and opened up on struggling to hold things together after games.

The Switzerland international is currently recovering from a long-term knee injury suffered on his first appearance of the season in the Carabao Cup tie at Crawley.

The 31-year-old joined Norwich from Wolfsburg in January 2016 and was a key member of Daniel Farke’s squad which won the Sky Bet Championship to secure promotion to the Premier League.

Klose revealed how despite a “healthy family background” he still faced issues, “not having a plan in my life what to do.”

The Norwich defender said: “I ended up in alcohol. I started to drink when I was 13, I think.

“My friends were all bit a older than me so they were drinking, they were smoking, all sorts of things. It was a bad idea back then, but I did it.”

Klose continued: “I always wanted to become a footballer, and I was in the youth team of FC Basel.

“But at the end of the year I struggled in school, I got kicked out of three schools and I was drunk most of the time, during breaks in schools I went to smoke.

“I was just in that ‘world of dreams’ always, I was not really there.”

After telling his coach he was taking a step back from the game to set him “free”, Klose was soon thinking he was “going to fall back in that hole”, so started drinking again and smoking more.

The defender recalled: “I had one night where I almost had a heart attack where I ended up on a park bench somewhere close to a lake, I don’t know where it was.

“I was alone and I woke up in the morning all by myself, a bit wasted still, and then I was like ‘OK, now I need to wake up actually’.”

Klose met his wife when they were around 16, was able to work things through with her and eventually moved to German club Nurnberg.

However, his mental health issues resurfaced as he struggled with negative comments on social media, before he “shut down completely” not wanting to “appear weak”.

After trying to block everything out – which included a routine of playing the FIFA video game until 4am – he eventually found support through a mental health coach, to whom he still speaks today.

“We talk every week,” Klose said.

“It’s good to talk to a neutral person. (Someone) who is completely neutral, who won’t judge you, who won’t give you that ‘everything’s going to be okay’.”

Klose revealed his recent knee problem had “kicked me back into so many bad memories”.

The defender said: “I started to think ‘I am 31 now’ and you see how many young players come up and you think ‘is it over?’… you start to doubt yourself.”

Klose looked back at one incident where his mistake in the final minute of a game had seen Norwich lose.

“I remember walking off the pitch and thinking ‘hold it together, as soon as you’re alone you can burst out in tears’,” he said.

“As I walked towards my dad (in the stands) I kept it together so much and I felt so strong. My dad said nothing and gave me a hug – I started to cry so much.

“I was like ‘why is this happening to me? I have done nothing wrong, I treat everyone as my friends, I think always positive’, now even more so than back then.”

Norwich confirmed on Thursday afternoon midfielder Todd Cantwell had withdrawn from the England Under-21s squad with a hamstring strain, while Kenny McLean had left the Scotland camp with a hip issue.