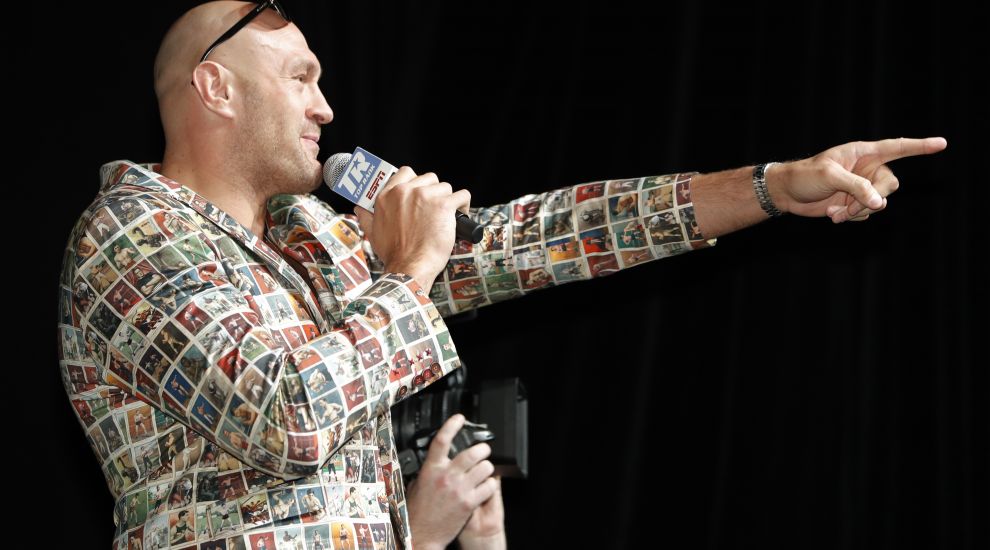 Tyson Fury turned up early and conducted the final press conference for his fight with Tom Schwarz as he continued to build on his growing popularity in the United States.

The heavyweight even briefly sang and, without a hint of attempting to provoke his opponent at what for boxing represented an unusually tension-free affair, complimented Germany’s Schwarz on his “good looks”.

Fury proved even more engaging than in the build-up to December’s dramatic draw with Deontay Wilder, since when he has signed a lucrative contract with promoters Top Rank to fight out of the US and made regular appearances on American television to discuss his struggles with suicide and mental health.

Before his victory over Wladimir Klitschko in 2015 he attended a press conference dressed as Batman and similarly involved those present while insulting his opponent, but the 30-year-old has matured and resisted any urges he may have felt to do the same.

Fury, who has been criticised for making homophobic and sexist remarks in the past, also diplomatically attempted to stop influential Top Rank promoter Bob Arum, 87, from complimenting female fighter Mikaela Mayer on her appearance.

Arum himself has been at pains to make comparisons between Fury’s charisma and that of Muhammad Ali and George Foreman, who he once promoted, and alongside Schwarz and co-promoter Frank Warren was summoned to the top-table early when Fury decided it was time to start.

It is only since the build-up to fighting Wilder that Fury’s personal struggles have been documented more widely in the US, and when asked to revisit them ahead of Saturday’s fight at Las Vegas’ MGM Grand, he responded: “Eighteen months ago I was in a very, very dark place.

“If you had seen me at that time I was very heavy and very unwell. I want to inspire people to change their lives and get well.

“I’m living my dream and I don’t know many people who can say the same. I’m seeing my picture on all the screens and billboards, this is what I was born to do.

“The crowd have warmed to me and been very welcoming. I’m surprised, people who don’t speak English, who don’t even watch sports are asking for photos and wanting to talk. It’s quite humbling.”

Fury had by then also joked about spending eight weeks training with Shaolin monks, having turned on and handed out microphones to those he felt should also be at the top-table.

Fury also stopped someone present from beginning an anti-German song when he demanded someone sing.

“The two guys Tyson reminds me of are Muhammad Ali and George Foreman,” explained Arum.

“They were people persons first. They’d talk directly to the people, over the head of the writers, right to the people.

“Tyson’s going to lead this sport into a new dimension, just the way Ali did in his time, and then later George.”