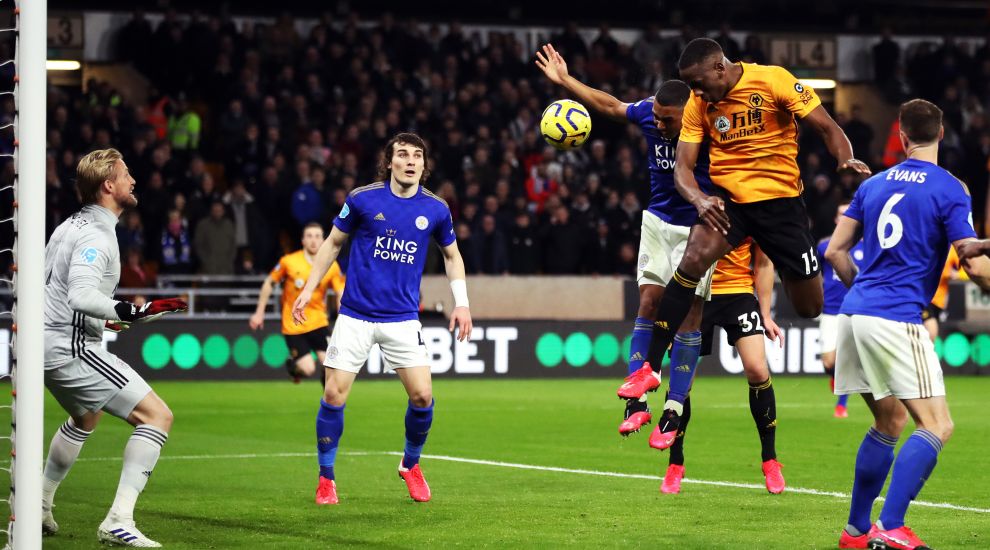 Wolves were forced to settle for a point against 10-man Leicester after another controversial VAR call.

Willy Boly’s first-half header was disallowed for offside after a narrow review on Pedro Neto as the hosts were held to a 0-0 draw at Molineux.

Hamza Choudhury was sent off late in the second half for the Foxes after collecting two bookings and they clung on after Raul Jimenez’s late header flashed wide.

Brendan Rodgers’ side remained third in the Premier League, missing the chance to return to second, as Jamie Vardy – now with one goal in his last 11 games – drew another blank.

While the governing body is yet to confirm what other Champions League spot would be available, and City are appealing, Wolves remain in the hunt – with fifth now possibly good enough to join football’s elite.

The draw lifted them to seventh in the chasing pack, three points behind fifth-placed Sheffield United.

The teams came in fresh following their winter break but the rest did little for the pace of the game, instead helping to throw it out of sync.

But they were rare openings and while it was competitive there was little tempo with neither side able to wrestle any control.

Caglar Soyuncu planted a header from James Maddison’s free-kick straight at Patricio after 23 minutes but the game meandered before a dramatic end to the half.

Five minutes before the break Schmeichel almost gifted Wolves the lead when his sloppy pass to Choudhury allowed Neto to nip in yet he could only slice well wide.

Two minutes later Jimenez wasted an even better chance when he miscued a free header from Jonny’s cross to nod wastefully wide.

Wolves were then enraged a minute before the break when Boly glanced in Matt Doherty’s knockdown – only for VAR to disallow the goal.

Neto had played a short corner to Jota and when he collected the return pass, despite the ball being played backwards, the forward came from an offside position – however marginal.

Ruben Neves was booked for dissent and Conor Coady remonstrated with referee Mike Dean at the break as Molineux seethed.

It was the second time Nuno Espirito Santo’s men had seen a goal ruled out by VAR against Leicester this term after Leander Dendoncker’s strike was chalked off for handball in their 0-0 draw on the opening day.

The Premier League’s 17-goal top-scorer was starved of decent service though and Wolves began to seize the initiative when Adama Traore was introduced with 26 minutes left.

The hosts’ hopes were further raised when Choudhury was dismissed after 76 minutes. The midfielder was already on a booking and walked when he took down Dendoncker having slipped and lost the ball.

Wolves pressed and Jimenez powered a header over before Joao Moutinho fired wide.

Striker Jimenez should have won it, though, in the final minute of normal time but directed a free header inches wide and Schmeichel beat away Traore’s fierce drive in injury time.