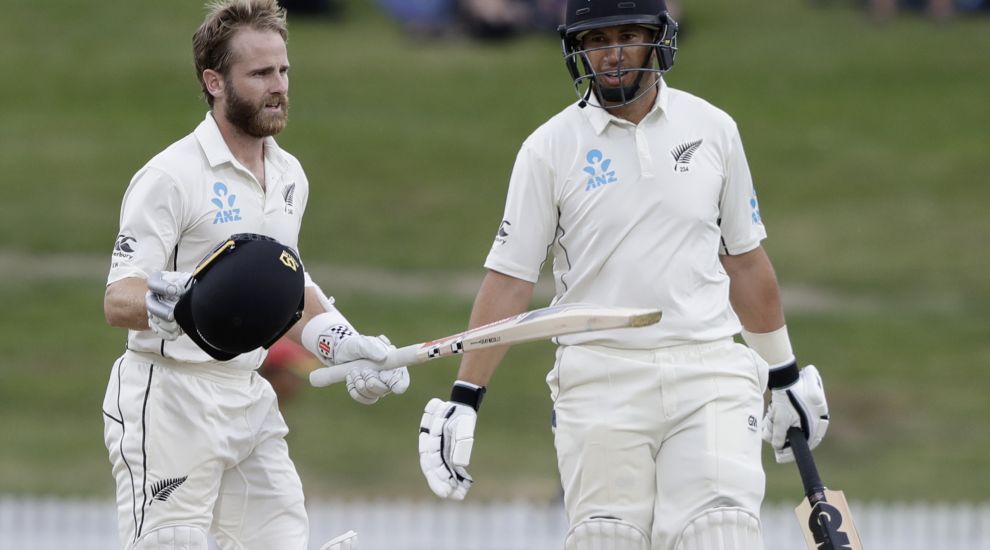 Kane Williamson and Ross Taylor thwarted England’s push for an unlikely victory in the second Test as New Zealand comfortably held on for a rain-affected draw at Hamilton to claim a 1-0 series triumph.

England needed an early cluster of wickets to give themselves a chance amid uncertainty about how much play there would be on the final day, but Ollie Pope and Joe Denly shelled simple catches to reprieve Williamson on 39 and 62.

Denly’s drop was particularly galling – and led to a couple of comical reactions – before Williamson capitalised to amass his 21st Test century, while Taylor remains two behind the Kiwi captain after also going to three figures.

The pair had taken their unbroken partnership to 213 in 66 overs when the forecast rain arrived 15 minutes after lunch, with Williamson on 104 not out and Taylor unbeaten on 105, ruling out the prospect of any further play.

New Zealand, who finished on 241 for two and a lead of 140, were therefore left celebrating a fifth consecutive Test series win at home and their second over England in the space of 20 months.

England’s winless run in New Zealand stretched to seven Tests, despite the best efforts of captain Joe Root, who followed up his magnificent 226 by issuing a call for one last push from his side on Tuesday.

But their catching has let them down on occasions in this series, most notably when BJ Watling compiled his epic 205 after being shelled on 31 in the innings defeat at Mount Maunganui last week, and it was a feature here.

The inclement weather and benign nature of the Seddon Park surface meant Williamson’s let-offs may have been of little consequence and England can console themselves with an improved display ahead of a series against South Africa, which starts later this month and counts towards the World Test Championship.

England would have hoped for a morale-boosting success but Williamson and Taylor had taken New Zealand into safer waters the previous night, closing to within five of wiping out England’s 101-run first-innings lead.

Prising apart a pair with more than 13,000 Test runs between them was the order of a blustery last morning but England, not for the first time in this series, were unable to take their opportunities.

Having added only two to his overnight 37, Williamson gloved down the leg-side off Ben Stokes but Pope, deputising for the injured Jos Buttler behind the stumps and keeping wicket for only the sixth time in his 34-match first-class career, snatched at the chance.

As if to underline the significance of the moment, Williamson pulled Stokes assertively for four through backward square to take New Zealand into the lead before he and Taylor went to their fifties with some eye-catching strokes.

However, Archer’s clever thinking and some hesitancy from Williamson presented another golden opening, only for Denly to fluff his lines.

Archer had changed his action, lowering his front arm before releasing a knuckle ball, which perhaps confused Williamson enough to offer a limp prod to midwicket, where Denly could not hold on to a gilt-edged chance.

Archer had already been wheeling away in celebration, only to turn round and see the ball on the floor, while Stuart Broad had his hands over his mouth.

England were willing but Williamson and Taylor were untroubled thereafter, even if Stokes clattered the former on the helmet on the way through to Pope, with England chancing a review.

The more unobtrusive Taylor went to 7,000 Test runs while two pulled fours in the last three balls before lunch from Stokes, who had bowled short for most of the session, took Williamson to within one blow of his ton.

He duly got there after the resumption, with the floodlights now switched on in the gloom, with a fine sweep for his 11th four, as Root brought himself and fellow part-time spinner Denly on to bowl to spare his seamers.

Taylor moved into the 90s with a slog sweep for his 11th four off Root before dispatching the next two deliveries over the deep midwicket boundary for his sixth Test ton at this venue.

It was appropriately timed as the heavens opened two balls later and a draw was announced at 3.53pm local time (2.53am GMT).