Civil servants walk out in row over pay 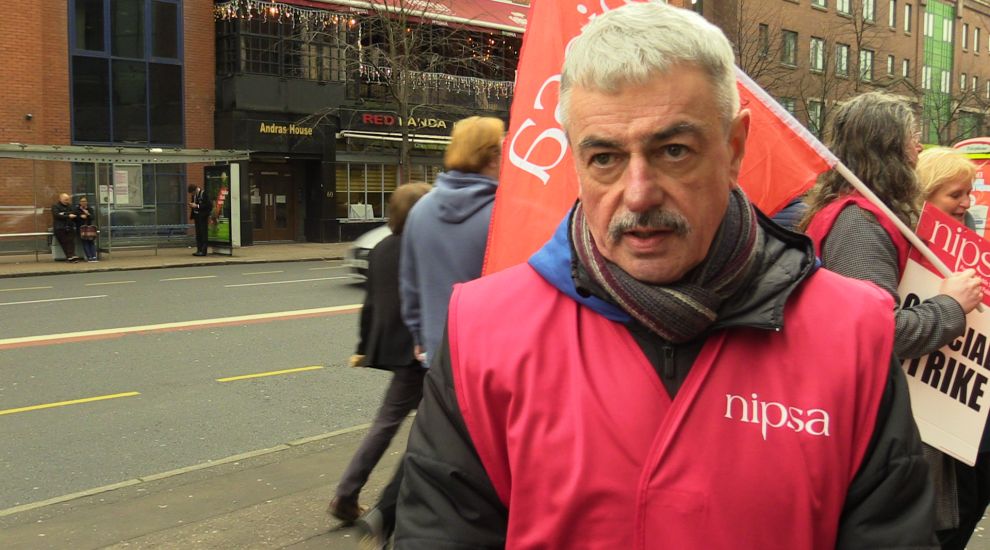 Civil servants walk out in row over pay

Around 4,500 public servants walked out on Friday across the country and demanded equal treatment with nurses who recently secured a rise.

Office staff claimed inflation in areas like child care and mortgages had outstripped wage packet growth for almost a decade.

A large group, bearing flags and placards, organised by the union NIPSA gathered in Belfast city centre outside a child maintenance office.

Civil servants were angered when there was no mention in the “New Decade, New Deal” agreement of seeking to settle the Civil Service dispute. Specific reference was made to health workers’ and teachers’ disputes.

They are protesting at the failure to address the issue as part of the deal to restore Stormont powersharing.

Mr McWilliams is a case worker who arranges child maintenance on behalf of clients in Northern Ireland and eastern England.

He said staff had lost a considerable part of their income over the last ten years.

“People are basically fed up and have decided to take action.”

He said union members working in benefit agency offices were dealing with the most vulnerable and helping them with their financial problems while themselves having to resort to benefits.

“This is the sixth day that we have come out, that anger is still there.

Alison Millar general secretary at NIPSA, said no pay offer was on the table so the strike continued.

She recalled: “I was talking to someone on the picket line who used to go on annual holidays, now it is every three to four years before they can afford to take a family on a holiday.

“People are saying, maybe in middle-management grades, that the cost of child care is so expensive and they have not had increases in their pay and they are really struggling to make ends meet.

“People on salaries that you would think could make ends meet, they are really struggling in the absence of having (pay increases).

“Child care is going up, mortgages are expensive, rents are going up, all of these things are going up while their pay is actually going backwards in real pay terms.”

The union met Finance Minister Conor Murphy on Wednesday and said Mr Murphy told them he would press the Treasury for more money for Northern Ireland.

Powersharing was restored earlier this month following a three-year hiatus.

A Department of Finance spokesman said: “The Northern Ireland Civil Service has put in place measures to ensure services continue to be delivered as far as practicable.”

He said: “I appreciate the work that civil servants do in supporting and delivering a wide range of public services and am committed to continued engagement with trade union colleagues.

“Through joint working and meaningful engagement we will be better placed to meet the challenges ahead.”

Environment Secretary refuses to rule out chlorinated chicken in UK