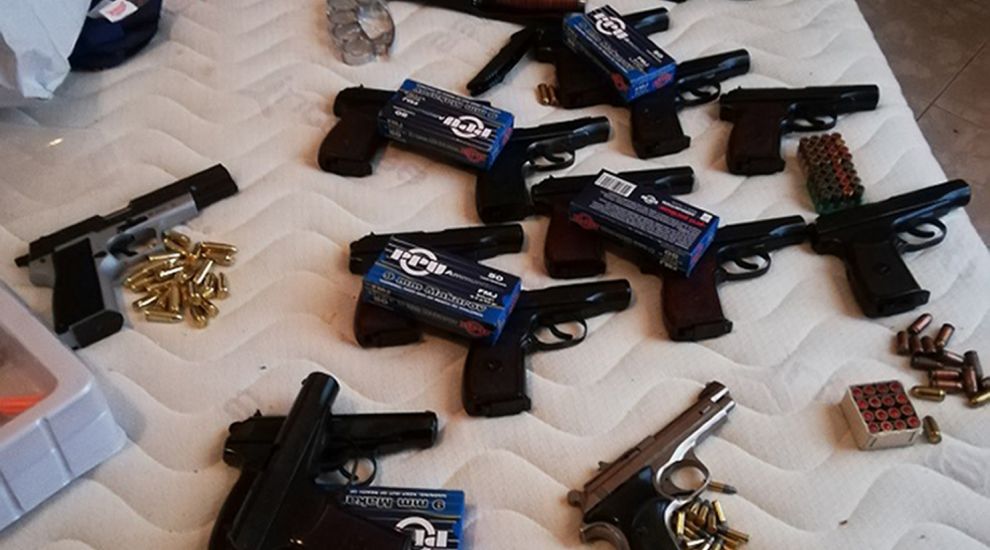 Thirteen people were arrested after 56 guns destined for use on Britain’s streets were seized in police raids.

All were seized in coordinated raids on Merseyside and in Bulgaria.

Five men and four women, aged 22 to 50, were held on conspiracy to import firearms after armed police raids on eight properties in Birkenhead and Wirral on Monday.

The raids came after two packages destined for Merseyside were intercepted in Bulgaria containing 14 firearms, eight silencers and 691 rounds of ammunition.

The NCA, Bulgarian law enforcement and Merseyside Police have launched a huge investigation into more than 30 similar previous importations to the UK.

Armed police raids on the Merseyside addresses on Monday also recovered three additional firearms and a significant amount of ammunition, the NCA said, along with £20,000 in cash, cannabis and more than 600 ecstasy tablets.

At the same time, police in Bulgaria carried out raids, arresting four suspects, including a UK national, seizing 39 handguns, 21 silencers, 1,253 rounds of ammunition and 80kg (176lbs) of heroin, with a street value of £8 million, all destined for the UK.

Paul Risby, NCA branch commander, said: “This represents a really significant triumph in our fight against gun trafficking into the UK.

“The NCA and partners in Bulgaria and Merseyside Police have stopped lethal firearms from entering the UK’s criminal market and hugely disrupted an organised crime group.

“One of the NCA’s key objectives is to prevent criminals in the UK accessing firearms.”

“They have a catastrophic impact and enable serious and organised crime by helping criminals to violently dominate the communities they operate in,” he said.

“We work relentlessly with partners at home and abroad to cut off supply routes and take action against those involved.

“Gun crime in the UK continues to be relatively low compared to mainland Europe.

“However, we know that illegal firearms are used in acts of serious violence and by crime groups to coerce and intimidate.”

Detective Chief Inspector Steve Reardon of Merseyside Police said: “Our joint activity has led to the recovery of guns and ammunition being smuggled into the country for use in serious violent crime and people have been arrested in connection with the importation of these weapons.

“It’s operations like this one that show why it is so important to work together with other agencies to target these individuals and make our streets and communities safer.

“Merseyside Police is relentless in its pursuit of those involved in serious organised crime, and the use of firearms on our streets, and by working with the NCA we have taken out a significant supply of weapons.

“I would urge anyone who has any information about those involved in serious organised crime, or gun crime, on Merseyside to contact Crimestoppers on 0800 555 111, and we will act on all information received.”