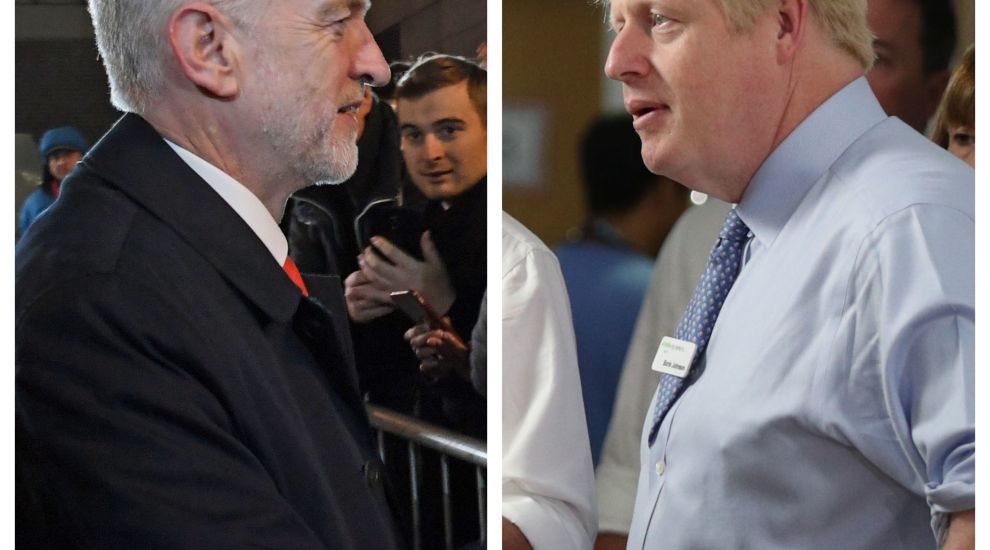 The hour-long ITV debate was cleared to go ahead after the High Court in London rejected a legal challenge by the Liberal Democrats and the SNP over the exclusion of their leaders.

Those who answered “don’t know” were removed from the result, with YouGov adding the figures are so close as to be within the margin of error.

“But given the Conservatives went into this debate in the lead, they will hope the lack of a knockout blow means they can maintain this until voting day.”

YouGov added that 1,646 people were surveyed for its snap poll of the leaders’ debate.

Asked whether the public could trust Boris Johnson, Foreign Secretary Dominic Raab told the PA news agency: “Trust in British politicians is not particularly high but what they do want to see is what you do, what you are capable of delivering.

“He has shown in three months that he got the deal that no-one said could be delivered, everyone said it was impossible – he proved the doubters wrong.”

Asked about the audience’s laughter at Boris Johnson when asked about telling the truth, the Chancellor of the Duchy of Lancaster told reporters: “There was open laughter at Jeremy Corbyn’s failure to answer the questions on Brexit. What we have had from Jeremy Corbyn was a terrifying display of intellectual vacuity, he simply has no answer to the essential question … does he want us to be inside the European Union or out? No answers, no leadership, no chance.

“Boris Johnson won that debate hands down. The reason he did so is that he was the only prime minister on that stage.”

With the debate over the attention will turn now to reflection on how the two leaders did. Mr Johnson was interrupted for going over time more often by Etchingham, and Mr both leaders sparked both applause – and groans – from the studio audience.

Home Secretary Priti Patel told PA news agency: “It was quite clear Boris was the only prime minister on the stage this evening.

“But actually I think he was very strong on the NHS and challenging Corbyn quite frankly on Brexit where Corbyn effectively refused for nine times to outline what his plan was, whether or not he was going to be for Leave or Remain.”

Final statements now – Mr Corbyn starts by urging being to register to vote.

“This is a once-in-a-generation election to end privatisation and give the National Health Service the funding it needs. To give people the final say and get Brexit sorted.

“To tackle the climate emergency that threatens our futures. To invest good jobs in every region and nation of our country.

“I ask that you vote for hope and vote Labour on December 12.”

Mr Johnson says “let’s end the dither and delay” and get Brexit done by January 31.

He accused Mr Corbyn of being “unfit” to be prime minister, adding: “Mr Corbyn, you’ve heard tonight, cannot answer the fundamental questions. Is he for Remain or Leave and what price would he pay to secure Nicola Sturgeon’s support to enter Number 10?

“If he can’t answer those questions tonight, I don’t think he’s fit to lead our country.”

The final question “leaving politics aside” – what present would you leave for each other under the tree?

Mr Corbyn said: “I know Mr Johnson likes a good read, so what I would probably leave under the tree for him would be A Christmas Carol by Charles Dickens and he could then understand how nasty Scrooge was.”

Responding, Mr Johnson said: “I would probably leave a copy – since you want a literary reference – a copy of my brilliant Brexit deal.”

Pressed by host Julie Etchingham to give a non-political answer, Mr Johnson said: “Mr Corbyn shares my love of plants and trees. I think maybe some damson jam,” to which Mr Corbyn said: “I love damson jam.”

Which current foreign leader do you most admire?

Mr Johnson says the leaders of the EU27 – all of them – for giving him his Brexit deal.

Mr Johnson was shut down as he tried to again ask Mr Corbyn on whether he would campaign to leave or remain in a second referendum.

Asked if the monarchy needs improvement – Mr Corbyn says it “needs some work”. Mr Johnson says it is “beyond reproach”.

The next audience questioner worries that the parties are “throwing money away with election pledges”.

Both Mr Corbyn and Mr Johnson said they would invest in public services and increase government spending after a General Election.

Mr Corbyn said: “We will end austerity, I am absolutely clear about that because it is so brutal on the lives of so many people.”

Mr Johnson said: “I believe in spending, investing massively in our public services because we support … a dynamic wealth-creating sector.”

Away from the debate studio,

Fact-checking organisation Full Fact has criticised the Conservatives for changing their Twitter handle to “factcheckUK” for the ITV debate.

After the break, the first question is on the NHS and future provisions.

Mr Corbyn mentions a friend who died of cancer recently and her plea to him via a Twitter video to improve the NHS – he says A&E performance is worst ever and calls for a “fully funded NHS” for all:

Mr Johnson answered by saying the Tories want to make the NHS better for doctors, nurses and patients.

He says the NHS will “never be up for sale” in any negotiation.

Here’s a reminder of the two opening statements:

Commercial break now on ITV and back in London, Lib Dem leader Jo Swinson makes a point about the green room where she is waiting to appear on the post-debate coverage.

Etchingham asks them both to make a pledge to improve the nature of political debate in the UK – Jeremy Corbyn attacks Mr Johnson’s record in the final few weeks of Parliament particularly comments about female politicians.

She asks them to make a gesture – and they shake hands, with Mr Johnson walking over to Mr Corbyn’s podium.

Asked about integrity, Mr Johnson raises a laugh from the audience when he says he tells the truth – a heckler shouts out “well tell the truth then”.

Directed to answer about anti-Semitism complaints against the Labour Party, Mr Corbyn said: “Anti-Semitism is an absolute evil and scourge within our society.

“Racism in any form is a scourge in our society. I have taken action in my party where anyone who has committed any anti-Semitic acts or made any anti-Semitic statements, they either suspended or expelled from the party and investigated every single case. We do take this very, very seriously indeed.”

The next audience question is about trust – Mr Johnson answers first saying trust in politics and Parliament has been “corroded” and says the way to restore it is “to get Brexit done”.

Mr Corbyn replies that trust has to be earned, and he has gained this by talking to people around the country. “Leadership is about listening to people”.

Mr Corbyn, asked to rule out a second Scottish independence referendum before the end of the first year of a Labour government, said: “I’ve said there would be no deal with the SNP, there would be no support for a Scottish referendum in the early years of the next Labour government because I want to invest in Scotland and give Scotland the £70 billion it needs in capital investment.”

He said it was “their choice” if the SNP leadership “chooses to put the Conservative government back in office”.

Mr Johnson added: “I listened very carefully as I always do to Mr Corbyn – I didn’t hear him say he was going to rule out a referendum on Scotland. Did you?”

The Prime Minister claimed his Brexit deal allows the whole of the UK to come out of the EU, adding: “Northern Ireland is part of the customs territory of the UK. It’s there in black and white.”

Mr Corbyn accused the Prime Minister of conducting “secret meetings” with the US about the NHS and a future trade deal.

The Labour leader said: “What we know of what Mr Johnson has done is a series of secret meetings with the United States in which they were proposing to open up our NHS markets as they call them to American companies.”

Responding, Mr Johnson said: “This is an absolute invention. It is completely untrue. There are no circumstances whatever in which this Government or any Conservative government will put the NHS on the table in any trade negotiation.”

Former Labour MP Chuka Umunna, who joined the Liberal Democrats in June, tweeted a reminder that this is a two-leader debate:

Is the Union more important that Brexit? Yes or No? – Mr Corbyn doesn’t specifically answer, and Mr Johnson says the Union is “of course, the most important thing”.

Mr Johnson replied: “We have a deal that keeps the whole of the UK together as we come of the EU and of course Jeremy Corbyn and the Labour Party be in no doubt about it in order to secure power and the keys to number 10 are going to do a deal, or probably already have done a deal with Nicola Sturgeon and the SNP to form Corbyn-Sturgeon coalition and the price of that deal … would be a second referendum on the union with Scotland.”

Etchingham ask Mr Johnson if he has “dug himself a new ditch” over Brexit, and queries if another coin would be minted for December 2020″ – The October 31 commemorative coins were melted down when the date passed without Brexit.

Meanwhile, Mr Johnson asks Mr Corbyn repeatedly if he will campaign for Leave or Remain in a second referendum, but the Labour leader repeated sidesteps that part of the question, although he says his party will abide by the referendum result.

The first big point of the debate is the timeline that Mr Johnson has set for getting his Brexit deal passed and a free trade deal done.

Speaking second on the ITV debate, Mr Johnson said a vote for the Tories is a vote to “get Brexit done”.

He added: “If you vote for us, we have a deal that is ready to go. Approved by every one of the 635 Conservatives candidates standing at this election.

“As soon as we can get that deal through Parliament, as we can in the next few weeks, we can get on with the people’s priorities.”

Mr Corbyn is first to make his opening announcement – and pledges again that Labour will hold a second referendum on Brexit.

“This election gives you a real choice about your future – the future of your community and of our country.”

Mr Johnson follows with his promise to get Brexit done – he runs slightly over time, prompting Etchingham to hurry him up.

Tonight’s debate is hosted by ITV from their Salford Studios. The host is Julie Etchingham and the producer earlier shared a picture of the studio set-up.

Here’s how the parties have fared so far in the 2019 General Election poll of polls:

Earlier today Lib Dem leader Jo Swinson called again to be included in leaders’ debates, saying her party is the voice of Remain.

Meanwhile, Labour leader Jeremy Corbyn shared part of his preparation – at the barbers.

Ahead of the debate, Boris Johnson took to the boxing ring: